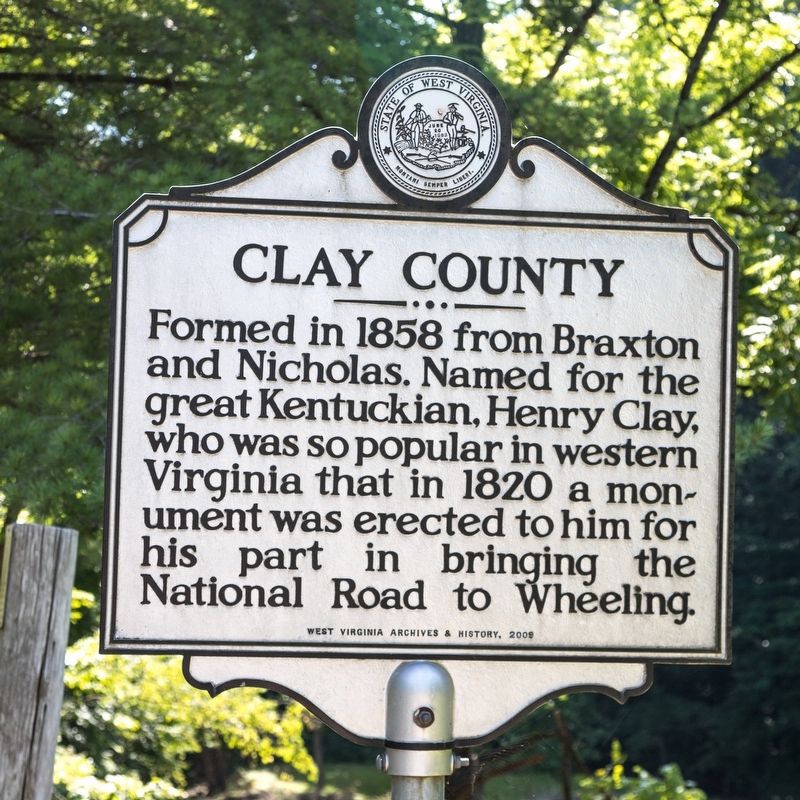 Photographed By J. J. Prats, July 14, 2019
1. Clay County side of marker
Inscription.
Clay County, also, Calhoun County. . , Clay County. Formed in 1858 from Braxton and Nicholas. Named for the great Kentuckian, Henry Clay, who was so popular in western Virginia that in 1820 a monument was erected to him for his part in bringing the National Road to Wheeling. , Calhoun County. Formed in 1856 from Gilmer. Named for John C. Calhoun, the eminent statesman from South Carolina. This is an important oil and gas producing county. Calhoun is largely devoted to farming and has been prominent in livestock production. . This historical marker was erected in 2009 by West Virginia Archives and History. It is Near Nebo in Clay County West Virginia

Clay County. Formed in 1858 from Braxton and Nicholas. Named for the great Kentuckian, Henry Clay, who was so popular in western Virginia that in 1820 a monument was erected to him for his part in bringing the National Road to Wheeling.

Calhoun County. Formed in 1856 from Gilmer. Named for John C. Calhoun, the eminent statesman from South Carolina. This is an important oil and gas producing county. Calhoun is largely devoted to farming and has been prominent in livestock production.

Topics and series. This historical marker is listed in this topic list: Political Subdivisions. In addition, it is included in the West Virginia Archives and History series list.

Other nearby markers. At least 8 other markers are within 12 miles 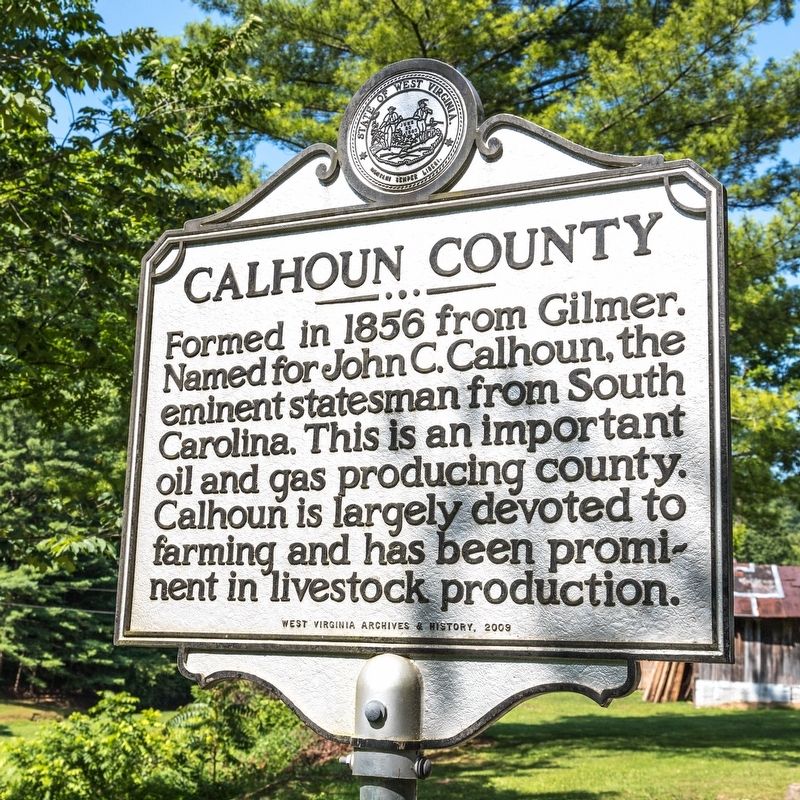 Nullification Crisis
The high rates of the Tariff of 1828 and the Tariff of 1832 angered many Southerners because they resulted in higher prices for imported goods. After the 1832 election, South Carolina held a state convention that declared the tariff rates of 1828 and 1832 to be nullified within the state, and further declared that federal collection of import duties would be illegal after January 1833. In response to this Nullification Crisis, President Jackson issued his Proclamation to the People of South Carolina, which strongly denied the right of states to nullify federal laws or secede. He asked Congress to pass what became known as the Force Bill, which would authorize the president to send federal soldiers against South Carolina if it sought to nullify federal law. 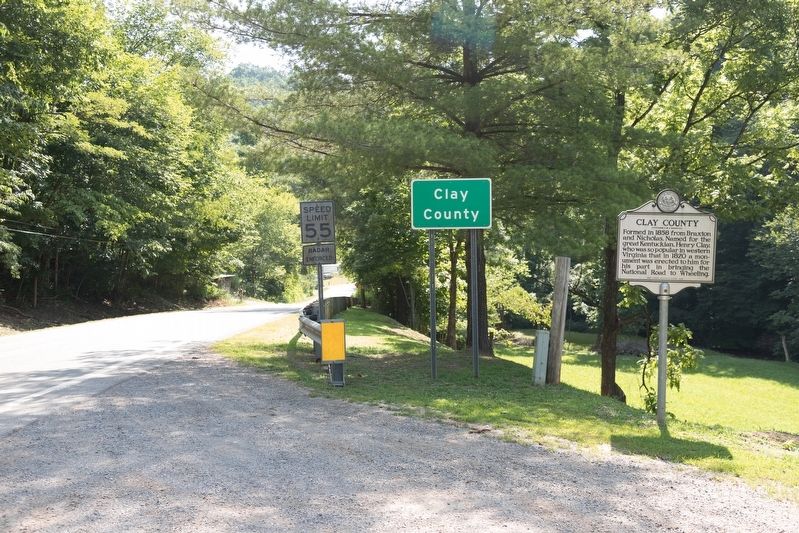 Photographed By J. J. Prats, July 14, 2019
3. Clay County / Calhoun County Marker
rates, he found Jackson’s strong rhetoric against South Carolina distressing and sought to avoid a crisis that could end in civil war. He proposed a compromise tariff bill that would lower tariff rates, but do so gradually, thereby giving manufacturing interests time to adapt to less protective rates. Clay’s compromise tariff won the backing of both manufacturers, who believed they would not receive a better deal, and John C. Calhoun, who sought a way out of the crisis but refused to work with President Jackson’s supporters on an alternative tariff bill. Though most members of Clay’s own National Republican Party opposed it, the Tariff of 1833 passed both houses of Congress. Jackson simultaneously signed the tariff bill and the Force bill, and South Carolina leaders accepted the new tariff, effectively bringing the crisis to an end. Clay’s role in resolving the crisis brought him renewed national stature in the wake of a crushing presidential election defeat, and some began referring to him as the "Great Compromiser." 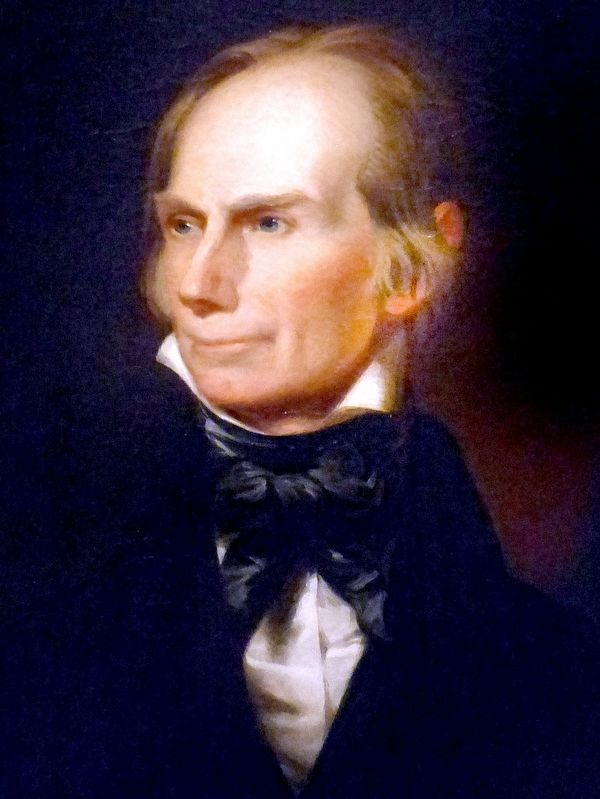 “His admirers called him ‘Gallant Harry,’ and his impetuous charm made him quite possibly the most beloved politician of his generation. But the real legacy of Kentucky's Henry Clay was his unstinting devotion, in the House of Representatives and later in the Senate, to maintaining a strong American union. In the early 1830s, as southern states threatened to nullify federal authority over a tariff bill that would have hurt plantation economies, Clay set aside his own preference for the new law to orchestrate a compromise. In 1850, with the North and South on the verge of armed conflict over the extension of slavery into the new western territories, Clay again stepped in with proposals that, temporarily at least, satisfied both sections. This last act of his career earned him the title of Great Pacificator.” -- NPG
territories acquired from Mexico. Many pro-slavery Southerners opposed it, and John C. Calhoun helped organize preparations for the Nashville Convention, which would meet that summer to discuss the possibility of Southern secession. ... Weeks from death and too feeble to speak, Calhoun wrote a blistering attack on the compromise that would become likely his most famous speech. On March 4, a friend, Senator James Mason of Virginia, read the remarks. Calhoun affirmed the right of the South to leave the Union in response to Northern subjugation. He warned that the day “the balance between the two sections” [North and South] was destroyed would be a day not far removed from disunion, anarchy, and civil war. Calhoun queried how the Union might be preserved in light of subjugation by the “stronger” party against the “weaker” one. He maintained that the responsibility of solving the question lay entirely on the North—as the stronger section, to allow the Southern minority an equal share in governance and to cease the agitation. He added:

If you who represent the stronger portion, cannot agree to settle them on the broad principle of justice and duty, say so; and let the States we both represent agree to separate and part in peace. If you are unwilling we should part in peace, tell us so; and we shall know what to do, when you 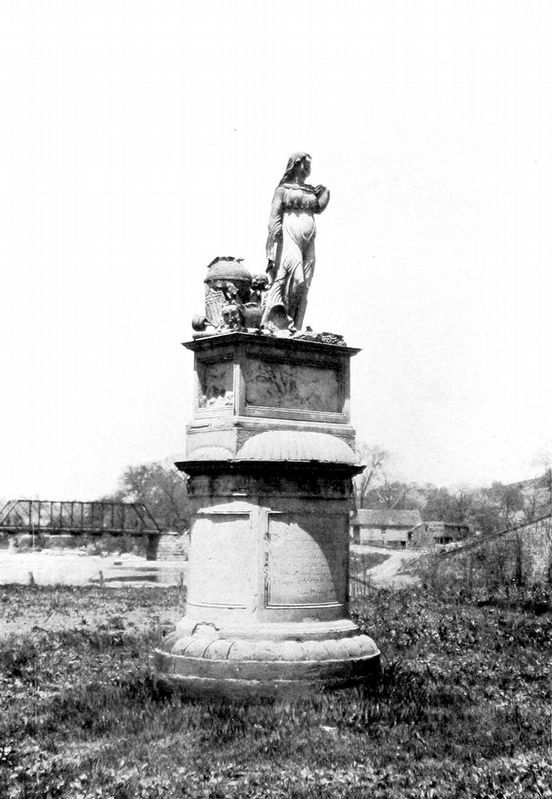 Internet Archive
5. Clay Monument, Elm Grove
“Erected in 1820 by Moses Shepherd and his wife, Lydia, to commemorate the distinguished public services of Henry Clay in behalf of the National Pike. Built of freestone and is twenty feet high. Time has effaced all the inscriptions except on the east side. The Shepherd mansion, built 1798, is on a nearby eminence.” This photo appeared in Souvenir of Wheeling, published by the town of Wheeling in 1905.
reduce the question to submission or resistance.


Calhoun died soon afterwards, and although the compromise measures did eventually pass, Calhoun’s ideas about states’ rights attracted increasing attention across the South. Historian William Barney argues that Calhoun’s ideas proved “appealing to Southerners concerned with preserving slavery ... Southern radicals known as ‘Fire-Eaters’ pushed the doctrine of states rights to its logical extreme by upholding the constitutional right of the state to secede.” 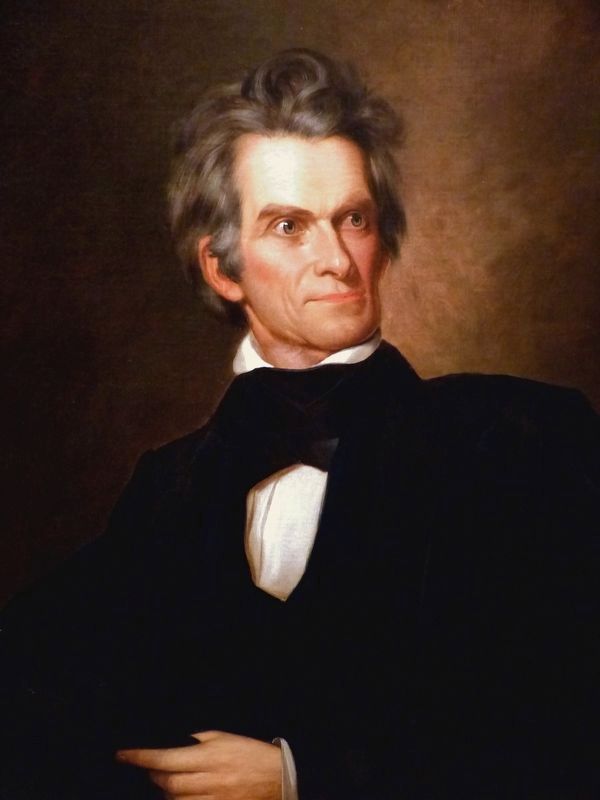 South Carolina's John C. Calhoun was a formidable presence in American politics for nearly four decades. In that time, he served twice as vice president and sat in two cabinets. It was during his later years in the Senate, however, that he had his greatest impact as a champion of southern interests and formulator of a sectional dogma of states' rights. But even as he defended the South against attempts to curb slavery and argued for the right of states to reject federal policies, he sensed that he was fighting a losing battle. His dying words in 1850 were “The South, the poor South.”