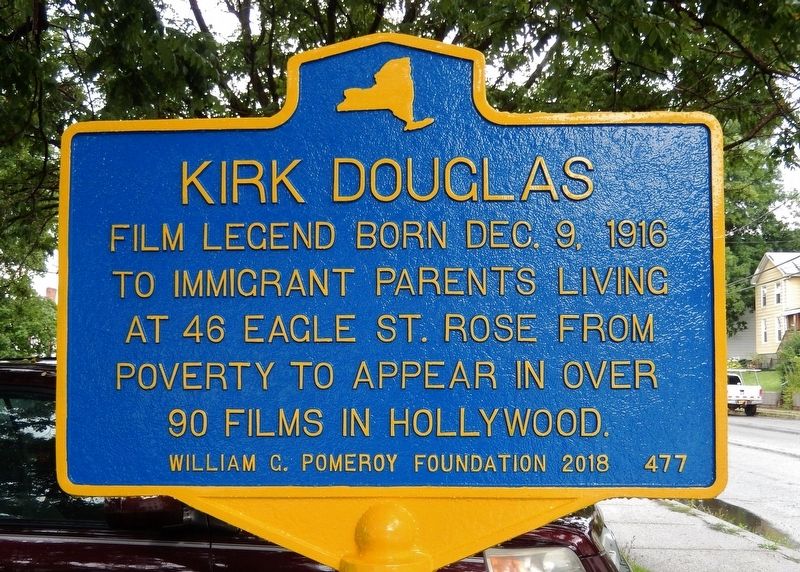 Photographed By Cosmos Mariner, August 18, 2019
1. Kirk Douglas Marker
Inscription.
Kirk Douglas. . Film legend born Dec. 9, 1916 to immigrant parents living at 46 Eagle St. Rose from poverty to appear in over 90 films in Hollywood. . This historical marker was erected in 2018 by William G. Pomeroy Foundation. It is in Amsterdam in Montgomery County New York

Film legend born Dec. 9, 1916 to immigrant parents living at 46 Eagle St. Rose from poverty to appear in over 90 films in Hollywood.

Topics and series. This historical marker is listed in these topic lists: Arts, Letters, Music • Entertainment. In addition, it is included in the William G. Pomeroy Foundation series list. A significant historical date for this entry is December 9, 1916. 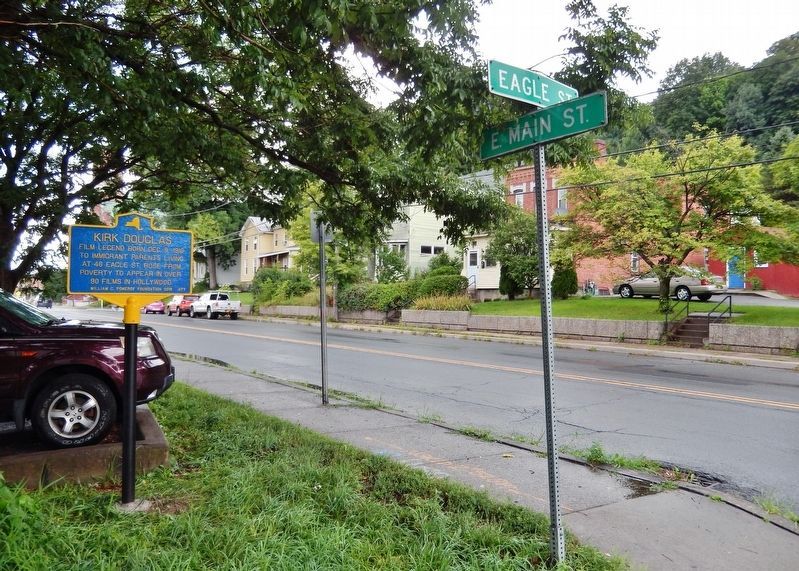 Also see . . .
1. Kirk Douglas (Wikipedia). Douglas was born Issur Danielovitch, in Amsterdam, New York, the son of Bryna and Herschel Danielovitch. His parents were Jewish emigrants from Chavusy, Mogilev Region, in the Russian Empire (present-day Belarus). In his 1988 autobiography, The Ragman's Son, Douglas notes the hardships that he, along with six sisters and his parents, endured during their early years:
“My father, who had been a horse trader in Russia, got himself a horse and a small wagon, and became a ragman, buying old rags, pieces of metal, and junk for pennies, nickels, and dimes. Even on Eagle Street, in the poorest section of town, where all the families were struggling, the ragman was on the lowest rung on the ladder. And I was the ragman's son.” (Submitted on August 18, 2019, by Cosmos Mariner of Cape Canaveral, Florida.)

2. Kirk Douglas Biography. Although growing up in a 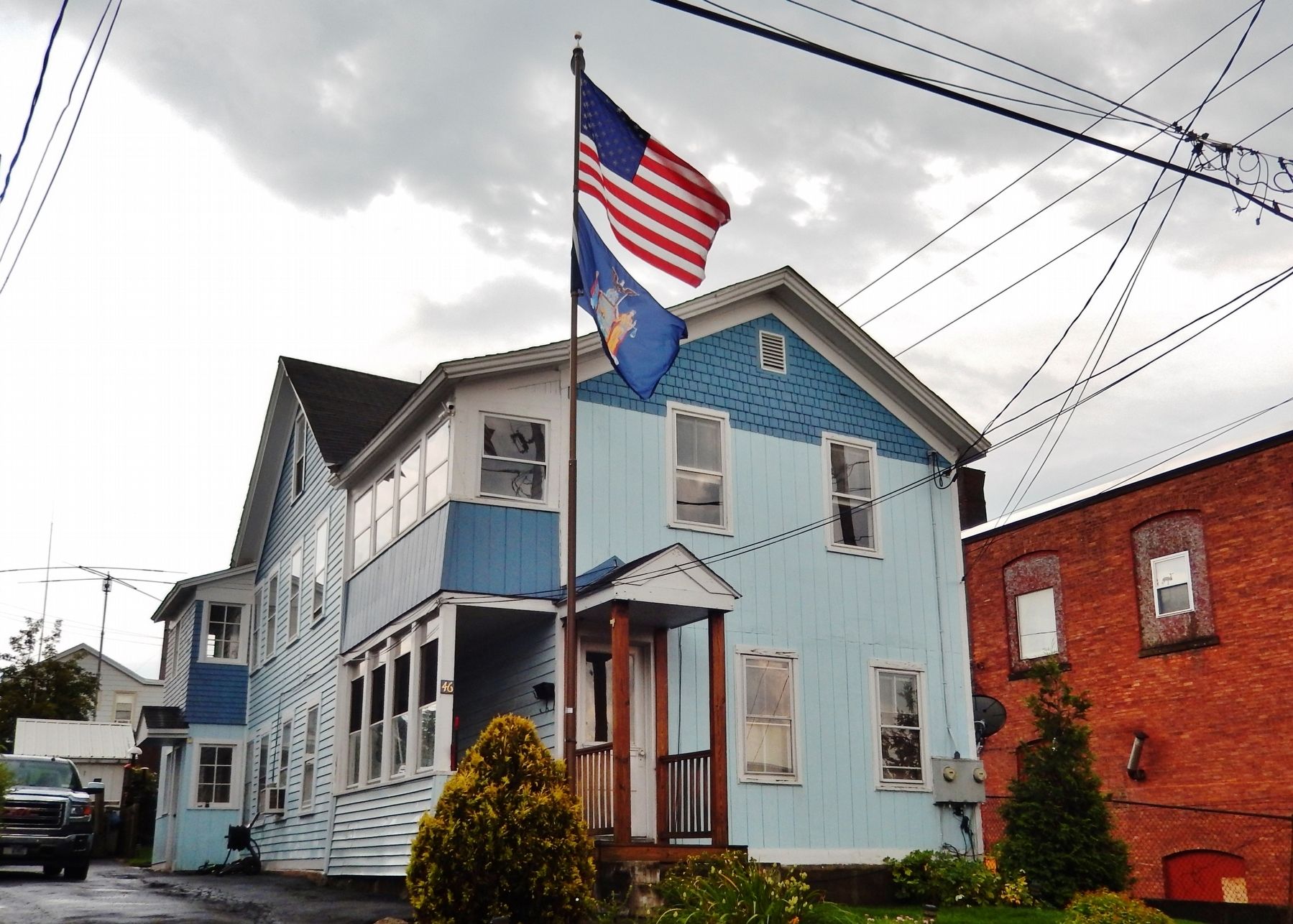 Photographed By Cosmos Mariner, August 18, 2019
3. Kirk Douglas' Childhood House (located on Eagle Street, 1/10 mile south of marker)
poor ghetto, Douglas was a fine student and a keen athlete and wrestled competitively during his time at St. Lawrence University. However, he soon identified an acting scholarship as a way out of his meager existence, and was sufficiently talented to gain entry into the American Academy of Dramatic Arts. (Submitted on August 18, 2019, by Cosmos Mariner of Cape Canaveral, Florida.) 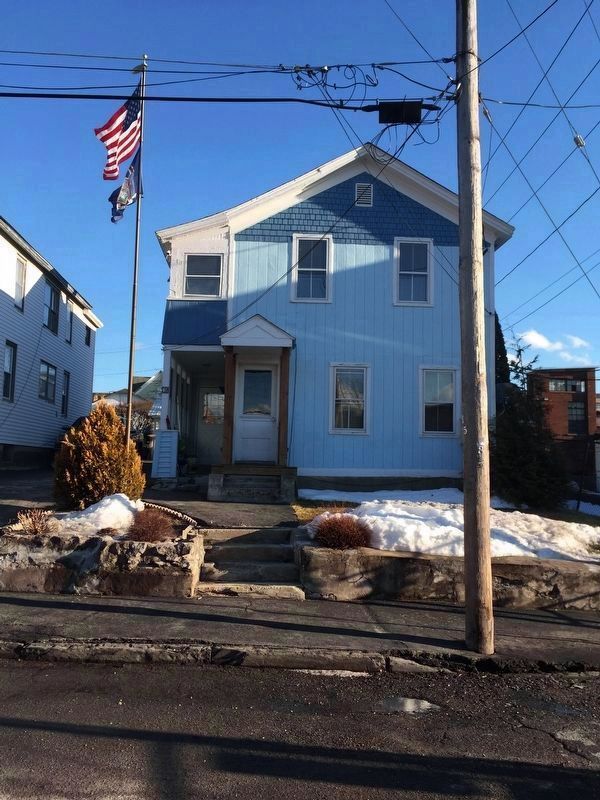