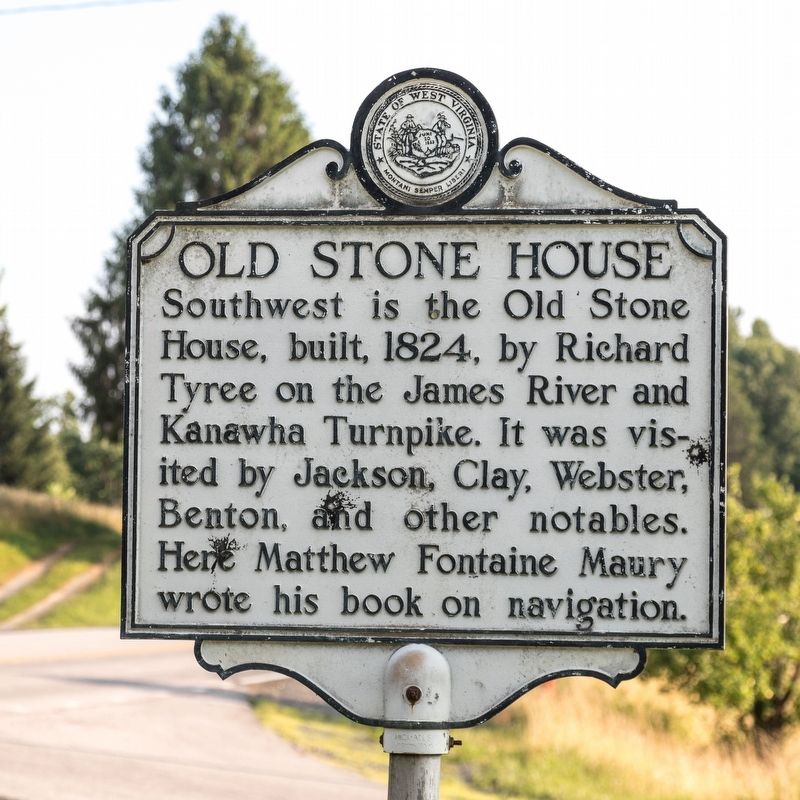 Southwest is the Old Stone House, built, 1824, by Richard Tyree on the James River and Kanawha Turnpike. It was visited by Jackson, Clay, Webster, Benton, and other notables. Here Matthew Fontaine Maury wrote his book on navigation.

Topics and series. This historical marker is listed in these topic lists: Architecture • Notable Places. In addition, it is included in the West Virginia Archives and History series list. A significant historical year for this entry is 1824.

Location. 38° 0.388′ N, 80° 52.723′ W. Marker is near Ravenseye, West Virginia, in Fayette County. Marker is at the intersection of Midland Trail (U.S. 60) and Stonehouse Road (County Route 10), on the right when traveling east on Midland Trail. Touch for map. Marker is in this post office area: Rainelle WV 25962, United States of America. Touch for directions. 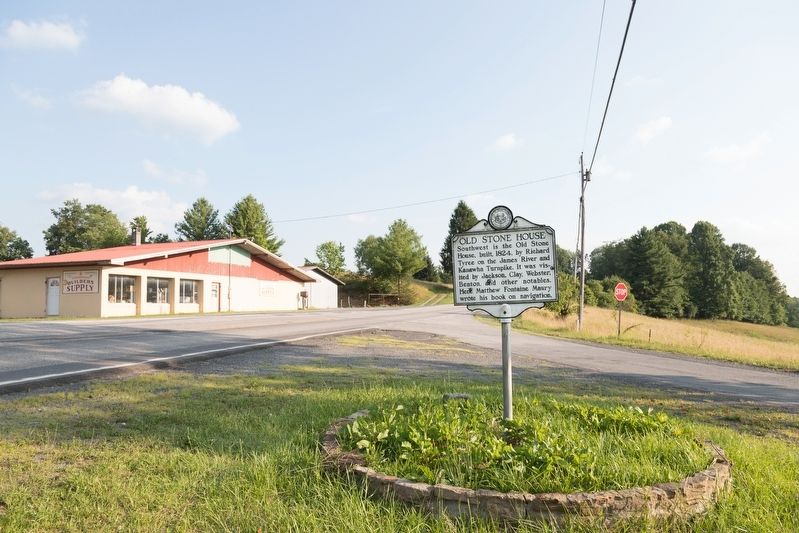 On the western foot of Big Sewell Mountain, on the historic James River and Kanawha Turnpike, stands the famous Old Stone House of stage-coach days.

This historic structure was built by Samuel Tyree in 1824and continued in the Tyree family until 1884when the property was purchased by the Longdale Iron Company, which had begun to develop its property at Cliiftop, two miles distant from the Tyree road house.

Babcock Coal and Coke Company next secured the property from Longdale Iron Company. At the instigation of ex-Governor William A. MacCorkle the new owners spent several thousand dollars in restoring the old stone tavern to something of its former glory. E. V. Babcock and his brother, Fred Babcock, owners of the house and surrounding countryside, were interested in historic matters and carried out the suggestions of the history-loving former chief executive of West Virginia.

This two-storybuilding is constructed of native stone and has spacious wooden porches. The lumber in the house was whipsawed and dressed by hand. Rafters were made of un-hewn poles, with laps and splices being held together with wooden pins. Made by hand, the wainscoting in the rooms came direct from the trees to the walls. Oak was used to make laths which were rived by hand and smoothed off with a drawing knife. Nails used in putting on the laths were made by hand in the local blacksmith shop.

A short distance from the noted house stood the log barn where the horses which pulled the stage coaches were fed and stabled. Hewn logs were used in the building of this barn, which structure was fifty feet long by thirty feet wide, and thirty feet high.

Famous as a stagecoach stop, the halls and rooms of the Old Stone House echoed the voices of such celebrated leaders as Henry Clay and others whose names were in the news of their day and generation. During the Civil War the house was frequently used as headquarters for the various commanders whose armies were operating in that section. Daniel Webster spent a month here while on a hunting trip in the area. Andrew Jackson, Thomas Benton, John Breckinridge, like Henry Clay, were guests at one time or another. While Matthew F. Maury, “the Pathfinder of the Seas”, was recuperating from a fracture of his collar bone which he sustained when the stage coach in which he was a passenger turned over near Old Stone House, he wrote his famous work on the charts of the sea winds and currents.

Editor’s want-list for this marker. Photo of the old stone house • Can you help?
Share this page.