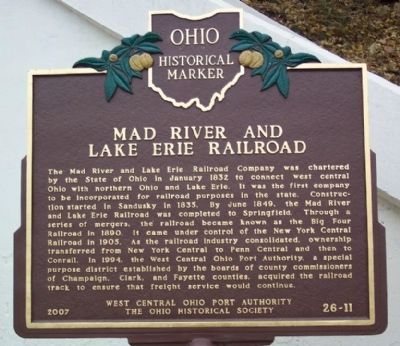 The Mad River and Lake Erie Railroad Company was chartered by the State of Ohio in January 1832 to connect west central Ohio with northern Ohio and Lake Erie. It was the first company to be incorporated for railroad purposes in the state. Construction started in Sandusky in 1835. By June 1849, the Mad River and Lake Erie Railroad was completed to Springfield. Through a series of mergers, the railroad became known as the Big Four Railroad in 1890. It came under control of the New York Central Railroad in 1905. As the railroad industry consolidated, ownership transferred from New York Central to Penn Central and then to Conrail. In 1994, the West Central Ohio Port Authority, a special purpose district established by the boards of county commissioners of Champaign, Clark, and Fayette counties, acquired the railroad track to ensure that freight service would continue.

Topics and series. This historical marker is listed in this topic list: Railroads & Streetcars 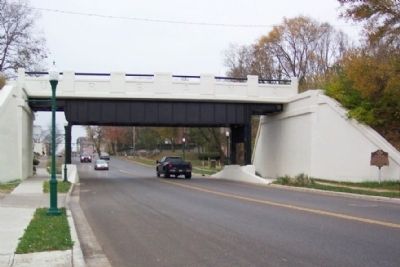 Click or scan to see
this page online
. In addition, it is included in the Ohio Historical Society / The Ohio History Connection series list. A significant historical month for this entry is January 1832.

Location. 40° 6.502′ N, 83° 45.496′ W. Marker is in Urbana, Ohio, in Champaign County. Marker is at the intersection of Miami Street (U.S. 36) and Railroad Overpass, on the right when traveling east on Miami Street. Touch for map. Marker is in this post office area: Urbana OH 43078, United States of America. Touch for directions.

Other nearby markers. At least 8 other markers are within walking distance of this marker. A different marker also named Mad River and Lake Erie Railroad (within shouting distance of this marker); Pennsylvania Railroad Depot (about 500 feet away, measured in a direct line); The Adam Mosgrove House (approx. ¼ mile away); Champaign County World War I Memorial (approx. ¼ mile away); Dayton, Springfield, and Urbana Electric Railway (approx. 0.3 miles away); This tablet mark's the Site of Doolittle's Tavern (approx. 0.3 miles away); Champaign County Civil War Memorial (approx. 0.3 miles away); Champaign County Veterans Memorial (approx. 0.3 miles away). Touch for a list and map of all markers in Urbana.
Credits. This page was last revised on June 16, 2016. It was originally submitted on November 24, 2008, by William Fischer, Jr. of Scranton, Pennsylvania. This page has been viewed 1,571 times since then and 20 times this year. Photos:   1, 2. submitted on November 24, 2008, by William Fischer, Jr. of Scranton, Pennsylvania. • Craig Swain was the editor who published this page.
Share this page.