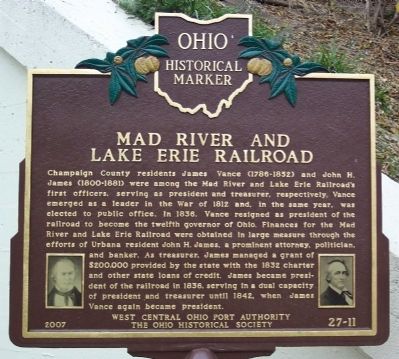 Champaign County residents James [sic-Joseph] Vance (1786-1852) and John H. James (1800-1881) were among the Mad River and Lake Erie Railroad's first officers, serving as president and treasurer, respectively. Vance emerged as a leader in the War of 1812 and, in the same year, was elected to public office. In 1836, Vance resigned as president of the railroad to become the twelfth governor of Ohio. Finances for the Mad River and Lake Erie Railroad were obtained in large measure through the efforts of Urbana resident John H. James, a prominent attorney, politician, and banker. As treasurer, James managed a grant of $200,000 provided by the state with the 1832 charter and other state loans of credit. James became president of the railroad in 1836, serving in a dual capacity of president and treasurer until 1842, when James Vance again became president.

Topics and series. This historical marker is listed in this topic list: Railroads & Streetcars. 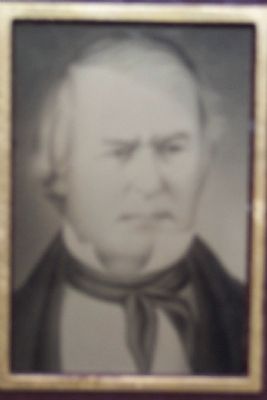 Click or scan to see
this page online
In addition, it is included in the Ohio Historical Society / The Ohio History Connection series list. A significant historical year for this entry is 1812.

Location. 40° 6.513′ N, 83° 45.458′ W. Marker is in Urbana, Ohio, in Champaign County. Marker is at the intersection of Miami Street (U.S. 36) and Railroad Overpass, on the right when traveling west on Miami Street. Touch for map. Marker is in this post office area: Urbana OH 43078, United States of America. Touch for directions. 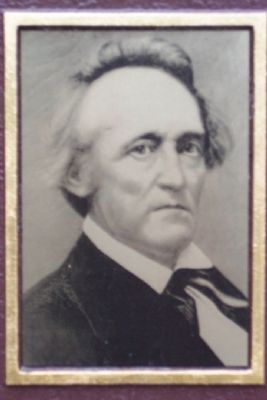 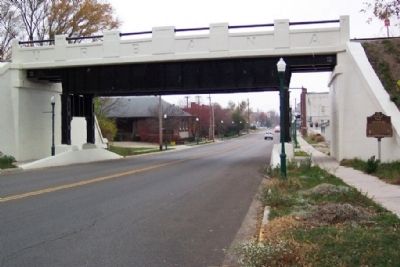