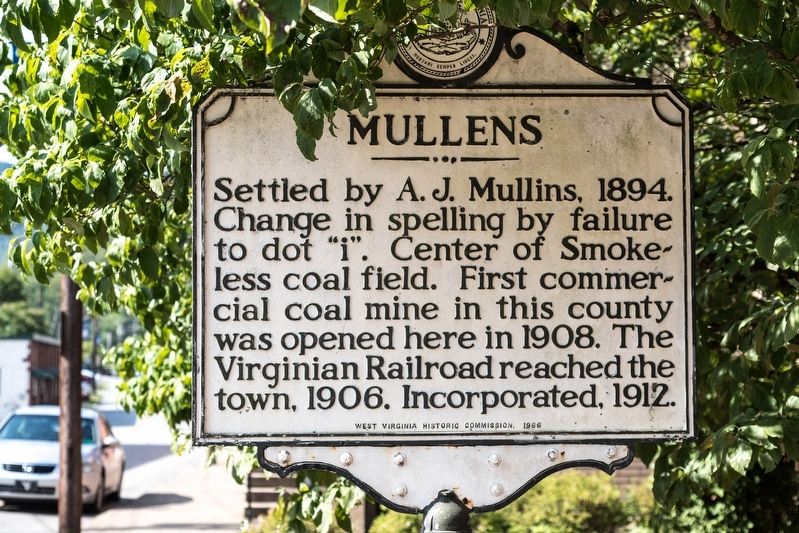 Photographed By J. J. Prats, July 15, 2019
1. Mullens Marker
Inscription.
Mullens. . Settled by A.J. Mullins, 1894. Change in spelling by failure to dot the “i”. Center of Smokeless coal field. First commercial coal mine in this county was opened here in 1908. The Virginian Railroad reached the town, 1906. Incorporated, 1912. . This historical marker was erected in 1966 by West Virginia Historic Commission. It is in Mullens in Wyoming County West Virginia

Settled by A.J. Mullins, 1894. Change in spelling by failure to dot the “i”. Center of Smokeless coal field. First commercial coal mine in this county was opened here in 1908. The Virginian Railroad reached the town, 1906. Incorporated, 1912.

Topics and series. This historical marker is listed in these topic lists: Railroads & Streetcars • Settlements & Settlers. In addition, it is included in the West Virginia Archives and History series list. A significant historical year for this entry is 1894.

Location. 37° 35.088′ N, 81° 22.823′ W. Marker is in Mullens, West Virginia, in Wyoming County. Marker is at the intersection of Moran Avenue and 4th Street, on the left when traveling north on Moran Avenue. It is at the Mullens City Hall. Touch for map. Marker is at or near this postal address: 316 Moran Ave, Mullens WV 25882, United States of America. Touch for directions. 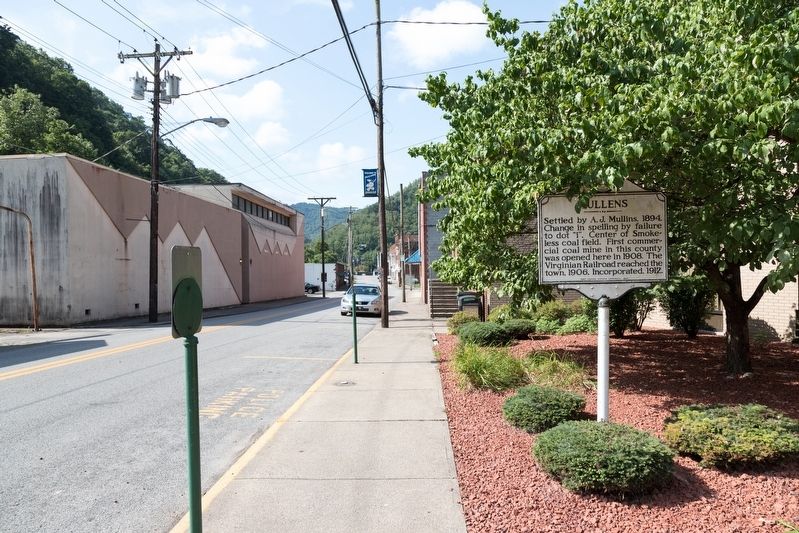 More about this marker. A copy of this marker can be found at Guyandotte Avenue and Dunman Street, on the west end of town.

Also see . . .  Wikipedia entry. “The early growth of the Mullens community came with development of the lumber and coal mining industries. In the early 20th century, coal-mining manager and developer William Nelson Page of Ansted helped open the Winding Gulf Coalfield with plans for the Deepwater Railway, a new short-line railroad. When Page ran into competitive collusion by the bigger railroads which would have wrecked his project—backed by his silent partner, wealthy industrialist Henry Huttleston Rogers—the plan was expanded in a secretive and massive way to build a line all the way east to the port of Hampton Roads. Completed in 1909, the Virginian Railway (VGN) established engine terminal and yard facilities near Mullens which employed hundreds of workers during the first half of the 20th century. ” (Submitted on August 25, 2019, by J. J. Prats of Powell, Ohio.) 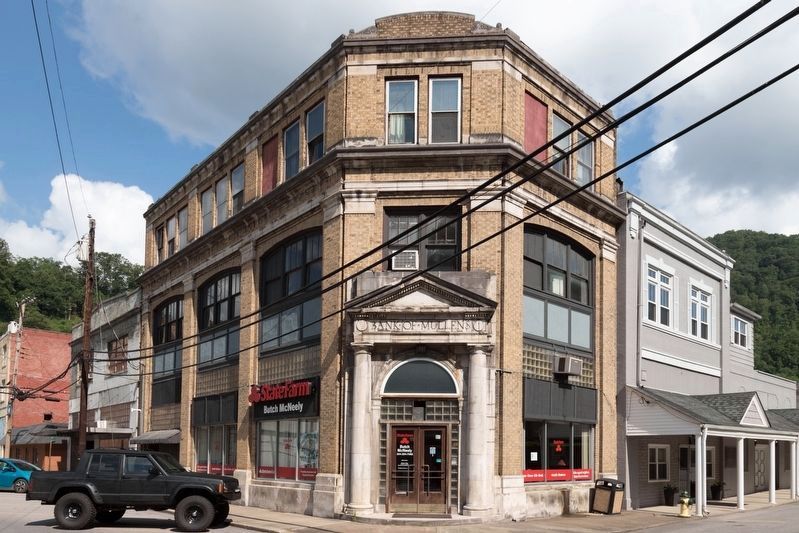