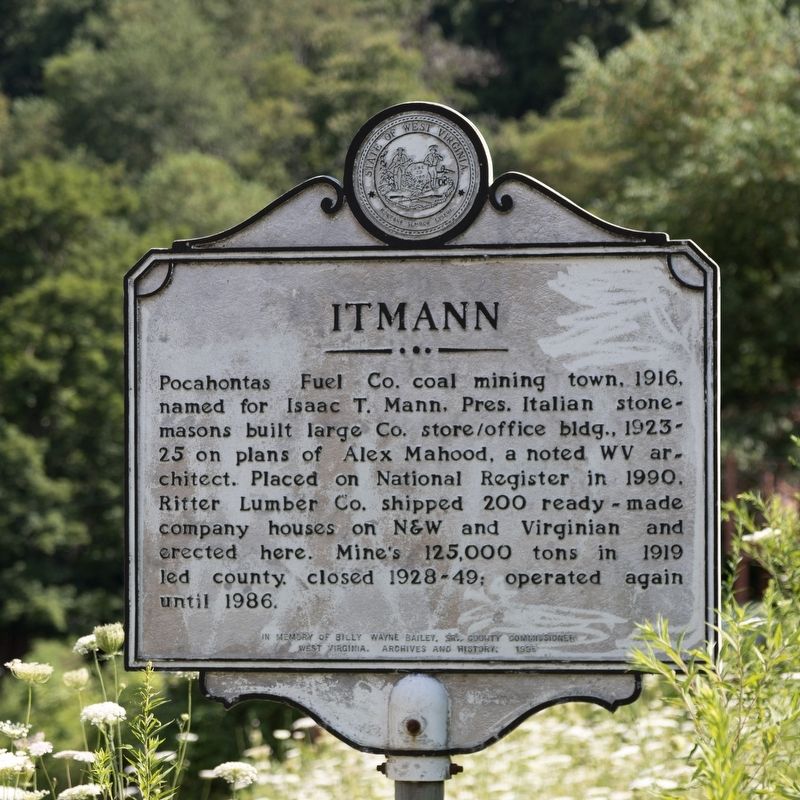 Topics and series. This historical marker is listed in these topic lists: Industry & Commerce • Labor Unions • Natural Resources. In addition, it is included in the West Virginia Archives and History series list. A significant historical year for this entry is 1916. 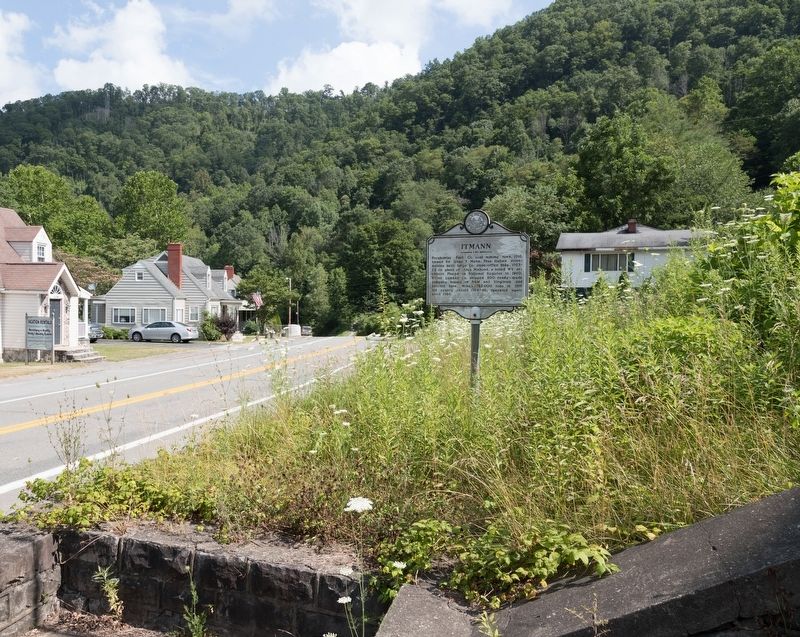 Itmann Company Store and Office is a historic commercial building located at Itmann, Wyoming County, West Virginia. It was designed by architect Alex B. Mahood and built in 1923-1925. It is a Classical Revival style complex built of native sandstone. It consists of four sections (A through D) laid out in an open courtyard plan. Sections A and C are 2½-story parapeted gable front sections located on the northern and southern sides of the courtyard and Section D is a 1-story parapeted half gable roofed loggia. It was built as a company store and community center for the local mining community.

Statement of Significance. West Virginia, in particular its southernmost part, contains vast quantities of high quality coal whose attraction to entrepreneurs profoundly changed the history of the state after serious exploitation of the mineral began in the late nineteenth century. At that time, a few small towns dotted the landscape, but most of the sparse population lived an agricultural and relatively isolated existence in the steep hills and narrow hollows characteristic of West Virginia. As a result, the creation of towns was necessary to support 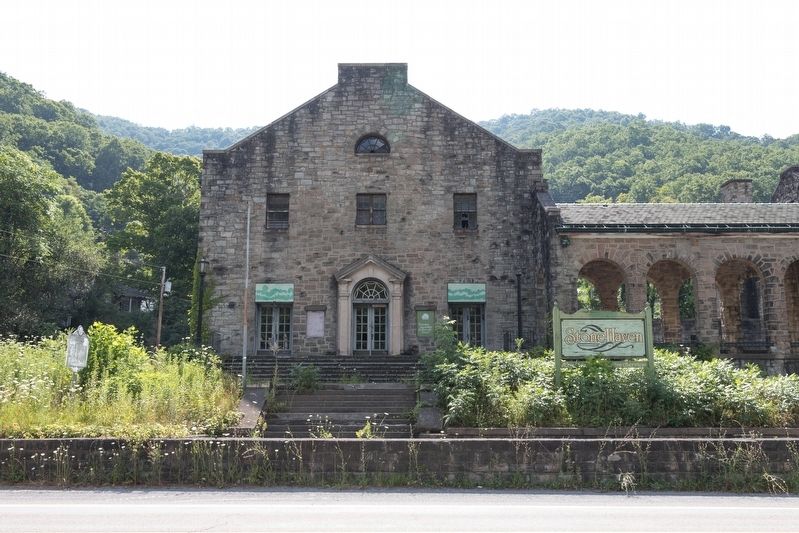 Photographed By J. J. Prats, July 15, 2019
3. Itmann Company Store and Marker
Marker is in the weeds on the left.
the mining families. Houses, schools, churches, and other buildings were erected by the coal companies who had acquired title or lease to the land in and around the new towns. At the center was the company store, which housed many of the important functions of the town and represented the omnipresence of the company in the mining town.

Itmann developed somewhat later than many company towns, but repeated this pattern. Although located only a few miles from Mullens and the Wyoming county seat at Pineville, the Itmann area was, until 1916, wilderness and vacant farmland, penetrated only by a narrow, rough, dirt road. That year, the Pocahontas Fuel Company acquired a lease to over 1,000 acres of land along the Guyandotte River, and the mining town of Itmann, named in honor of the company’s president I. T. Mann, was built. Pre-cut frame houses were quickly erected. Soon, there were other frame buildings: two company stores, a theater, and two schools, one for whites and one for blacks. In the early 1920s, a brick school replaced the white school, and in 1925, the nominated property replaced the original stores.

Like company stores throughout the region, the Itmann Company Store functioned as the center of the community. On one side of the building, the company offices, representing Pocahontas Fuel as both employer and landlord, were located. This side also contained the post office, a poolroom, a barber shop, and the doctor’s office. In these capacities, the building was not only the location of much needed services but also the center of casual social interaction between Itmann residents. On the other side of the building was the store. Despite the fact

Photographed By J. J. Prats, July 15, 2019
4. Former Itmann Company Store and Offices, Pocahontas Fuel Company
that Route 10, the main road into Itmann, was improved during the good roads movement of the early 1920s, it remained poor, and contact with neighboring communities was limited. Railroad transportation had been available at Itmann since the town’s founding; however, it was impractical for frequent trips. As a consequence, local residents were forced to depend on the Itmann Company Store. It was here that residents went for all their needs, ranging from food and clothing to furniture and burial caskets. By providing all the goods and services in Itmann, Pocahontas Fuel was able to recover much of the money it paid in salaries and determine the quality of life of its employees.

After flourishing for several years, the Itmann mine closed in 1928. The mining families departed, railroad workers became the primary residents of Itmann, and the town was partially closed until the mine reopened in 1948. At the same time, Route 10 was improved sufficiently to facilitate closer contact with other communities, and a newly formed bus company established a route through Itmann. The significance of the Itmann Company Store diminished; however, the building remained a central part of Itmann. During the 1930s, the building continued to symbolize the company’s role of landlord, and residents still frequented the building for shopping, services, and social contact.

The nominated property is significant in other areas as well. While the building was not erected until the early 1920s, several years after the nearby houses were built, the store land was graded in 1917 in preparation for the construction of the most prominent building in Itmann. Then, many small, frame 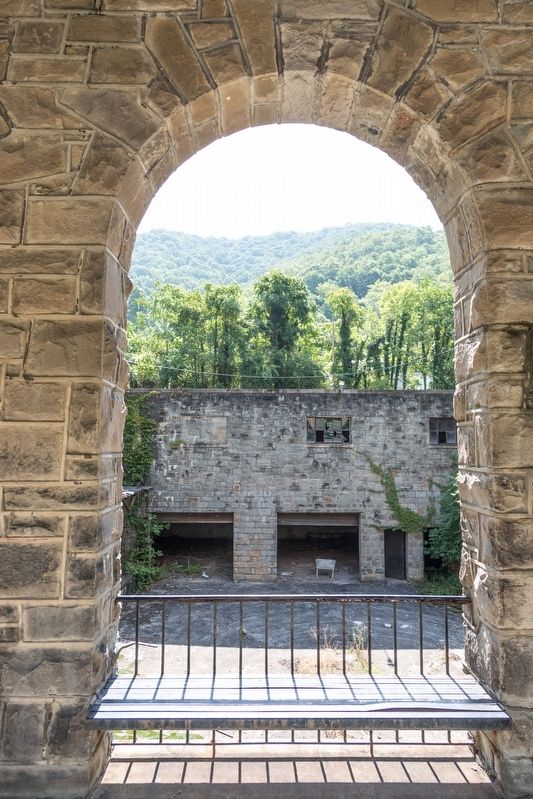 Photographed By J. J. Prats, July 15, 2019
5. View of Inner Courtyard from the Loggia
houses were placed in a semi-circular manner on the sloping hillside behind the store land. When it was finally built, the Itmann Store had a central location in the town.

As important as location was construction. West Virginia neverhad a large immigrant population, but coal mining brought huge increases in that population. By 1920, nearly 50 percent of all male immigrants worked in the coal industry. Some immigrants were skilled masons recruited to do masonry work related to the coal industry. Much of the stonework to be found in West Virginia is the result of the work of these masons. Unlike neighboring counties, Wyoming County did not experience a large increase in its immigrant population. However, European immigrants, particularly Italian stone masons, were brought to Itmann to build the store. This building reflects the shift in the ethnic make-up of southern West Virginia brought by coal mining.

From 1923 to 1925, in what was a major construction job for the area, stone was hand cut from the cliff across the river, hauled down the hill and across the river, and put in place by dozens ·of workers. Once completed, the stone building, due to its material and impressive size, dwarfed the surrounding buildings, and it continues to do so today. It was, with the exception of the brick school building, the only non-frame building in Itmann prior to World War II. Today, there are still only a few non-frame buildings. 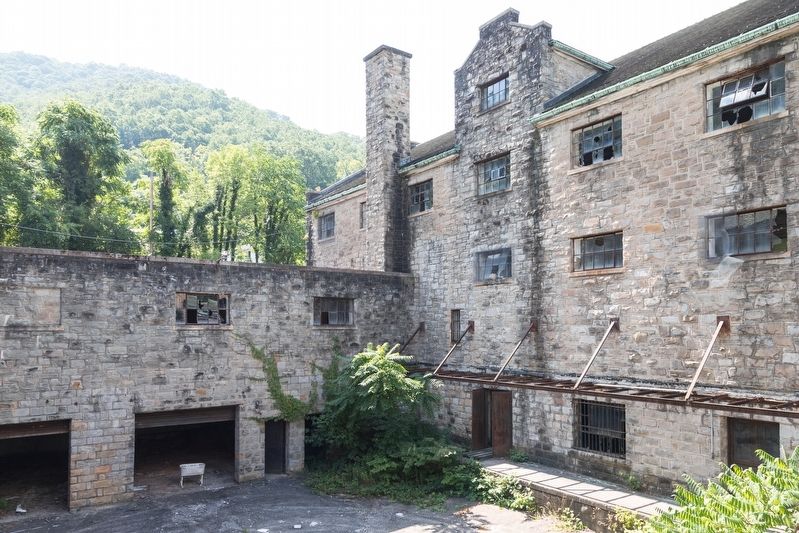 Photographed By J. J. Prats, July 15, 2019
6. Itmann Company Store Courtyard
in southern West Virginia. Most company stores were smaller buildings built of wood or, less frequently, brick. Additionally, the utilization of a courtyard plan and the prominence of the loggia connecting the two main sections of the building create a visual impact absent from most company stores.

The nominated property is also significant for its association with Alex B. Mahood. Mahood (1888-1970), who studied at the Ecole Des Beaux Arts in Paris, France after completing his schooling in the United States, was one of the most important architects in southern West Virginia. Utilizing primarily twentieth century revival styles, Mahood designed upper and upper-middle class residences and prominent public and commercial buildings. While Mahood was particularly instrumental in changing the face of Bluefield, West Virginia, his home, examples of his work, including the nominated property, exist throughout southern West Virginia. Previously listed on the National Register have been several of his buildings, including the Mercer County Courthouse, the West Virginia Hotel, and the Law and Commerce Building, the latter two as part of the Bluefield Downtown Commercial Historic District.

Conclusion: The Itmann Company Store and Office building is significant under two National Register criteria. It meets Criterion A within the areas of social history and industry because of its prominence to the coal mining town of Itmann and role in labor management. The building also represents the movement of European immigrants to southern West Virginia in the early 1900s. The property meets Criterion C because of its architectural significance. The building was designed 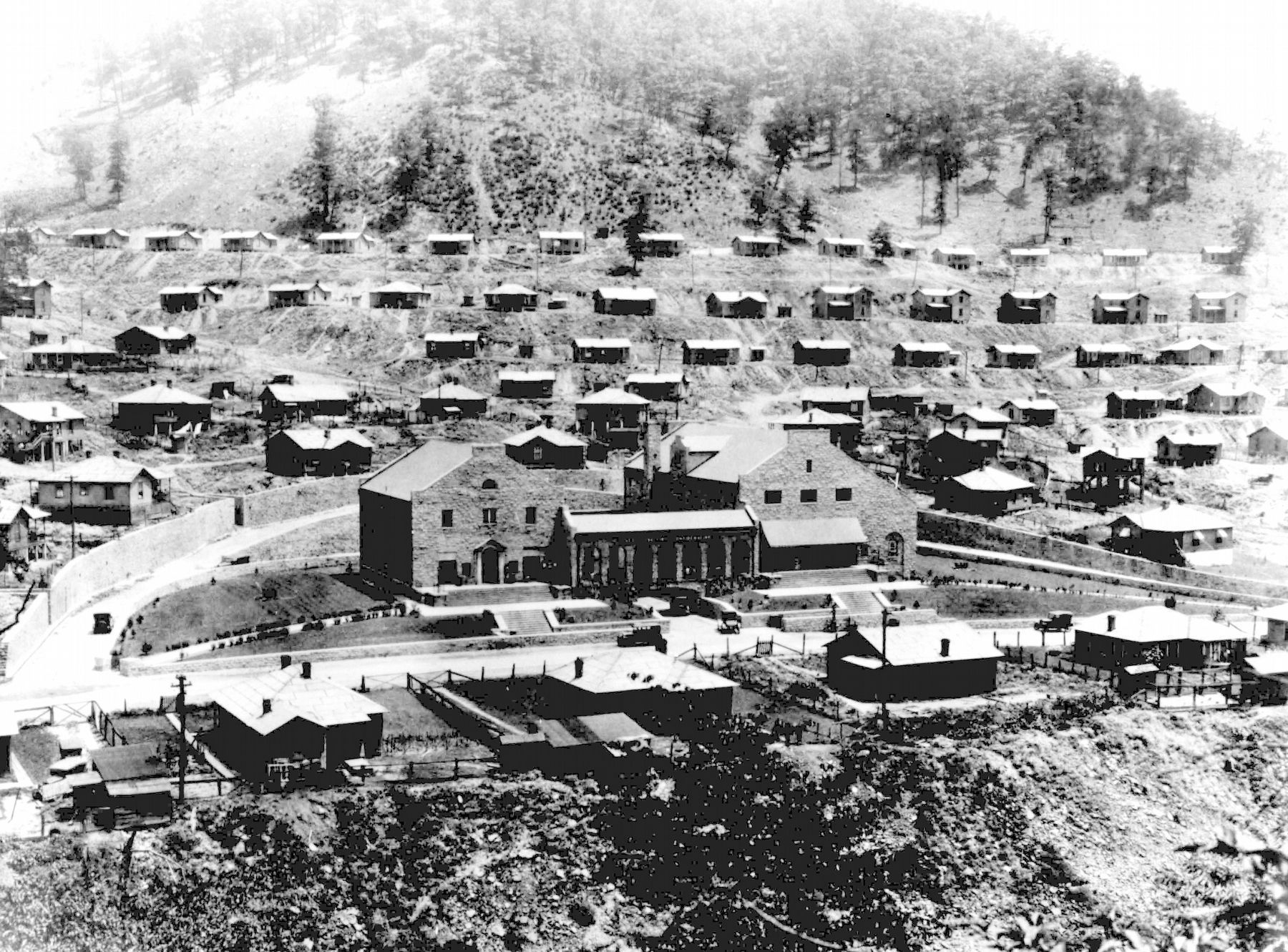 Undated photograph from the last page of the National Register of Historic Places Nomination form.
7. Itmann and the Itmann Company Store and Offices of the Pocahontas Fuel Company
in 1923 by Alex B. Mahood, one of the most important architects in West Virginia during the early part of the twentieth century. Furthermore, the nominated property is the most impressive building in Itmann and one of the finest extant company stores in southern West Virginia.