— The Blue and Gray Trail — 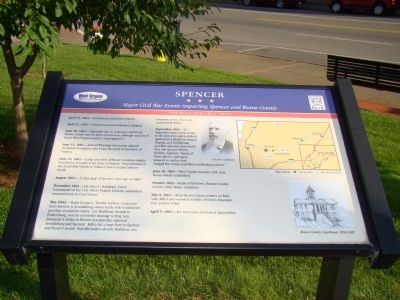 June 19, 1861—Statewide vote on ordinance confirmed. Roane County voted in favor of secession, although majority of future West Virginia counties voted against it.

2. Col. John C. Rathbone
Close up of photo reproduced on the marker.

Click or scan to see
this page online
George C. Trimble led four companies from Spencer to Arnoldsburg, where battle with Confederate guerillas resulted in victory. Col. Rathbone, located in Parkersburg, sent an erroneous message to Brig. Gen. Benjamin F. Kelley in Weston that guerillas captured Arnoldsburg and Spencer. Kelley led a large force to Spencer and found it secure. Guerilla leaders deceive Rathbone into temporary truce, which was rescinded by Kelley.

September 1862—In September most Union troops in the area were sent to defend against Lee’s attacks in western Virginia, and Confederate guerillas operated more freely. Also, the Spencer Weekly Bulletin reported, “bands of horse thieves, belonging properly to neither side, ravaged the county and killed unoffending citizens.”

May 9, 1864—Many Roane County soldiers on both sides killed and wounded at Battle of Cloyd’s Mountain. Gen. Jenkins killed. 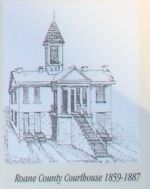 3. Roane County Courthouse 1859–1887
Close up of photo reproduced on marker
surrenders to Grant at Appomattox.

Topics and series. This historical marker is listed in this topic list: War, US Civil. In addition, it is included in the West Virginia Civil War Trails series list. A significant historical month for this entry is April 1983.

More about this marker. A portrait of Col. John C. Rathbone is reproduced on the marker, as is a map of the Blue and Gray Trail and a line drawing of the Civil War era Roane County Courthouse. 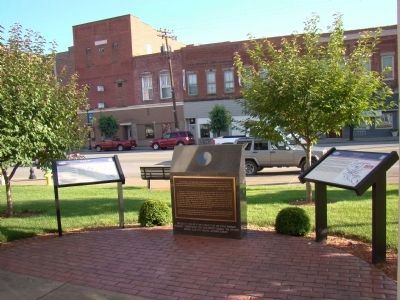