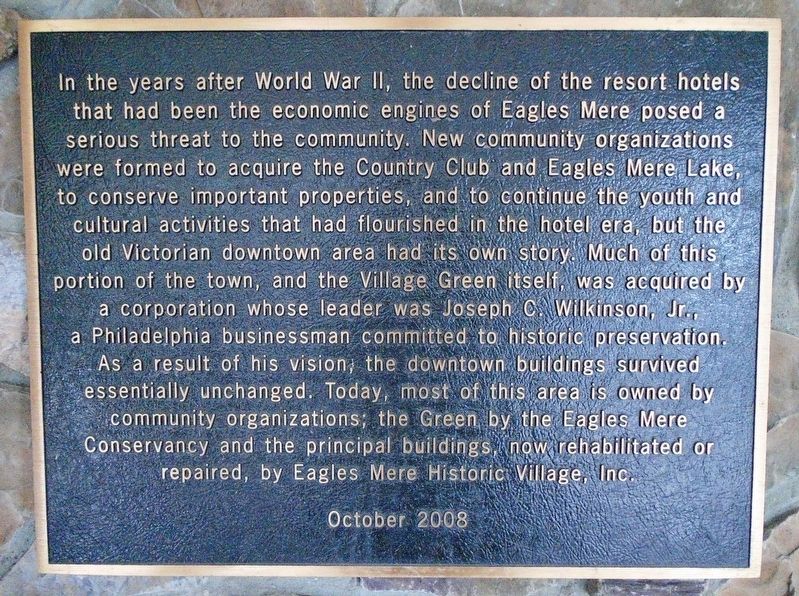 Photographed By William Fischer, Jr., August 24, 2019
1. Eagles Mere Downtown Revitalization Marker
Inscription.
In the years after World War II, the decline of the resort hotels that had been the economic engines of Eagles Mere posed a serious threat to the community. New community organizations were formed to acquire the Country Club and Eagles Mere Lake, to conserve important properties, and to continue the youth and cultural activities that had flourished in the hotel era, but the old Victorian downtown area had its own story. Much of this portion of the town, and the Village Green itself, was acquired by a corporation whose leader was Joseph C. Wilkinson, Jr., a Philadelphia businessman committed to historic preservation. As a result of his vision, the downtown buildings survived essentially unchanged. Today, most of this area is owned by community organizations; the Green by the Eagles Mere Conservancy and the principal buildings, now rehabilitated or repaired, by Eagles Mere Historic Village, Inc.

October 2008. . This historical marker was erected in 2008. It is in Eagles Mere in Sullivan County Pennsylvania