400 Acres: the Start of Forksville 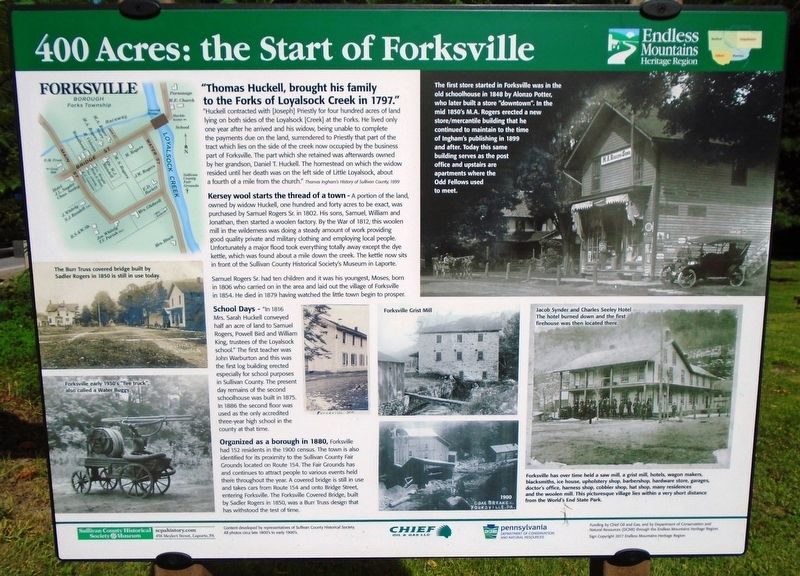 "Thomas Huckell, brought his family to the Forks of Loyalsock Creek in 1797." , "Huckell contracted with [Joseph] Priestly for four hundred acres of land lying on both sides of the Loyalsock [Creek] at the Forks. He lived only one year after he arrived and his widow, being unable to complete the payments due on the land, surrendered to Priestly that part of the tract which lies on the side of the creek now occupied by the business part of Forksville. The part which she retained was afterwards owned by her grandson, Daniel T. Huckell. The homestead on which the widow resided until her death was on the left side of Little Loyalsock, about a fourth of a mile from the church." Thomas Ingham's History of Sullivan County, 1899

Kersey wool starts the thread of a town - A portion of the land, owned by widow Huckell, one hundred and forty acres to be exact, was purchased by Samuel Rogers Sr. in 1802. His sons, Samuel, William and Jonathan, then started a woolen factory. By the War of 18 12, this woolen mill in the wilderness was doing a steady amount of work providing good quality private and military clothing and employing local people. Unfortunately a major flood took everything totally away except the dye kettle, which was found about a mile down the creek. The kettle now sits in front of the Sullivan County Historical Society's Museum in Laporte.

Samuel Rogers Sr. had ten children and it was his youngest, Moses, born in 1806 who carried on in the area and laid out the village of Forksville in 1854. He died in 1879 having watched the little town begin to prosper.

School Days - "In 1816 Mrs. Sarah Huckell conveyed half an acre of land to Samuel Rogers, Powell Bird and William King, trustees of the Loyalsock school." The first teacher was John Warburton and this was the first log building erected especially for school purposes in Sullivan County. The present day remains of the second school was built in 1875. In 1886 the second floor was used as the only accredited three-year high school in the county at that time.

Organized as a borough in 1880, Forksville had 152 residents in the 1900 census. The town is also identified for its proximity to the Sullivan County Fair Grounds located on Route 154. The Fair Grounds has and continues to attract people to various events held there throughout the year. A covered bridge is still in use and takes cars from Route 154 and onto Bridge Street, built by Sadler Rogers in 1850, was a Burr Truss design that has withstood the test of time.

. The first store started in Forksville was in the old schoolhouse in 1848 by Alonzo Potter, who later built a store "downtown". In the mid 1850's M.A. Rogers erected a new store/mercantile building that he continued to maintain to the time of Ingham's publishing in 1899 and after. Today this same building serves as the post office and upstairs are apartments where the Odd Fellows used to meet.

. Jacob Synder and Charles Seeley Hotel. The hotel burned down and the first firehouse was then located there.

. The Burr Truss covered bridge built by Sadler Rogers in 1850 is still in use today. . This historical marker was erected in 2017 by Sullivan County Historical Society, PA DCNR, Chief Oil and Gas, and Endless Mountain Heritage Region. It is in Forksville in Sullivan County Pennsylvania