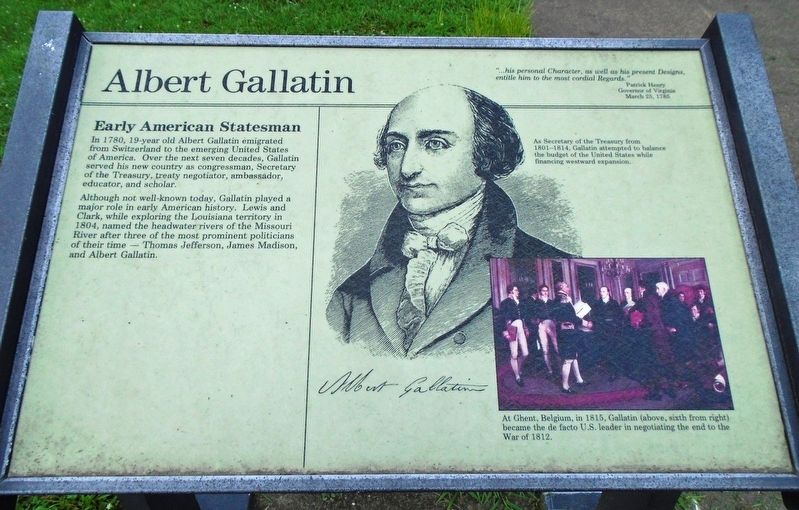 "...his personal Character, as well as his present Designs, , entitle him to the most cordial Regards." , Patrick Henry, Governor of Virginia , March 25, 1785

Early American Statesman , In 1780, 19-year old Albert Gallatin emigrated from Switzerland to the emerging United States of America. Over the next seven decades, Gallatin served his new country as congressman, Secretary of the Treasury, treaty negotiator, ambassador, educator, and scholar.

Although not well-known today, Gallatin played a major role in early American history. Lewis and Clark, while exploring the Louisiana territory in 1804, named the headwater rivers of the Missouri River after three of the most prominent politicians of their time , Thomas Jefferson, James Madison, and Albert Gallatin.

As Secretary of the Treasury from 1801-1814, Gallatin attempted to balance the budget of the United States while financing westward expansion.

[Bottom right painting caption reads] , At Ghent, Belgium, in 1815, Gallatin (above, sixth from right) became the de facto U.S. leader in negotiating the end to the War of 18 12. . This historical marker was erected by National Park Service. It is Near Point Marion in Fayette County Pennsylvania