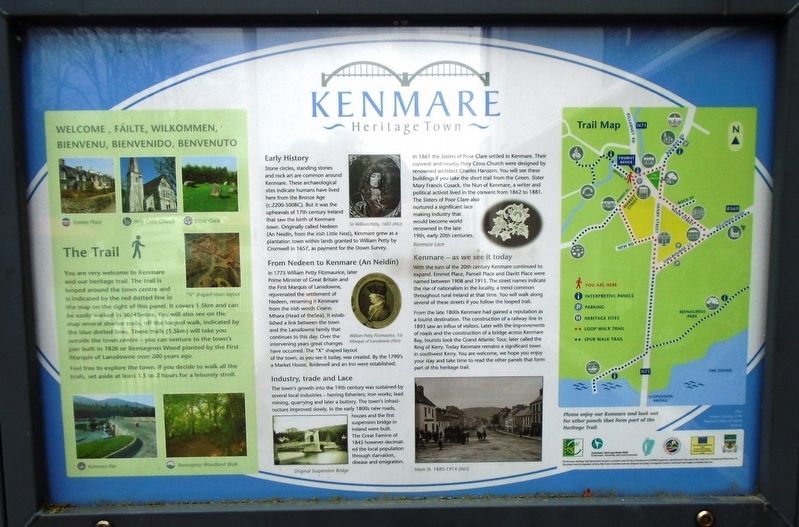 Early History , Stone circles, standing stones and rock art are common around Kenmare. These archaeological sites indicate humans have lived here from the Bronze Age (c.2200-500BC). But it was the upheavals of 17th century Ireland that saw the birth of Kenmare town. Originally called Nedeen (An Neidín, from the [I]rish Little Nest), Kenmare grew as a plantation town within lands granted to William Petty by Cromwell in 1657, as payment for the Down Survey.

From Nedeen to Kenmare (An Neidín) , In 1775 William Petty Fitzmaurice, later Prime Minister of Great Britain and the First Marquis of Lansdowne, rejuvenated the settlement of Nedeen, renaming it Kenmare from the [I]rish words Ceann Mhara (Head of the Sea). It established a link between the town and the Lansdowne family that continues to this day. Over the intervening years great changes have occurred. The "X" shaped layout of the town, as you see it today, was created. By the 1790's a Market House, Bridewell and an Inn were established.

Industry, trade and Lace , The town's growth into the 19th century was sustained by several local industries - herring fisheries; iron works; lead mining, quarrying and later a buttery. The town's infrastructure improved slowly. In the early 1800s new roads, houses and the first suspension bridge in Ireland were built. The Great Famine of 1845 however decimated the local population through starvation, disease and emigration.

In 1861 the Sisters of Poor Clare settled in Kenmare. Their convent and nearby Holy Cross Church were designed by renowned architect Charles Hansom. You will see these buildings if you take the short trail from the Green. Sister Mary Francis Cusack, the Nun of Kenmare, a writer and political activist lived in the convent from 1862 to 1881. The Sisters of Poor Clare also nurtured a significance lace making industry that would become world renowned in the late 19th, early 20th centuries.

Kenmare - as we see it today , With the turn of the 20th century Kenmare continued to expand. Emmet Place, Parnell Place and Davitt Place were named between 1908 and 1913. The street names indicate the rise of nationalism in the locality, a trend common throughout rural Ireland at that time. You will walk along several of these streets if you follow the looped trail.

From the late 1800s Kenmare had gained a reputation as a tourist destination. The construction of a railway line in 1893 saw an influx of visitors. Later with the improvements of roads and the construction of a bridge across Kenmare Bay, tourists took the Grand Atlantic Tour, later called the Ring of Kerry. Today Kenmare remains a significant town in southwest Kerry. You are welcome, we hope you enjoy your stay and take time to read the other panels that form part of this heritage trail.

[Left side of marker] The Trail , [Not transcribed]

[Right side of marker] Trail Map , [Not transcribed] . This historical marker is in Kenmare in County Kerry Munster Ireland