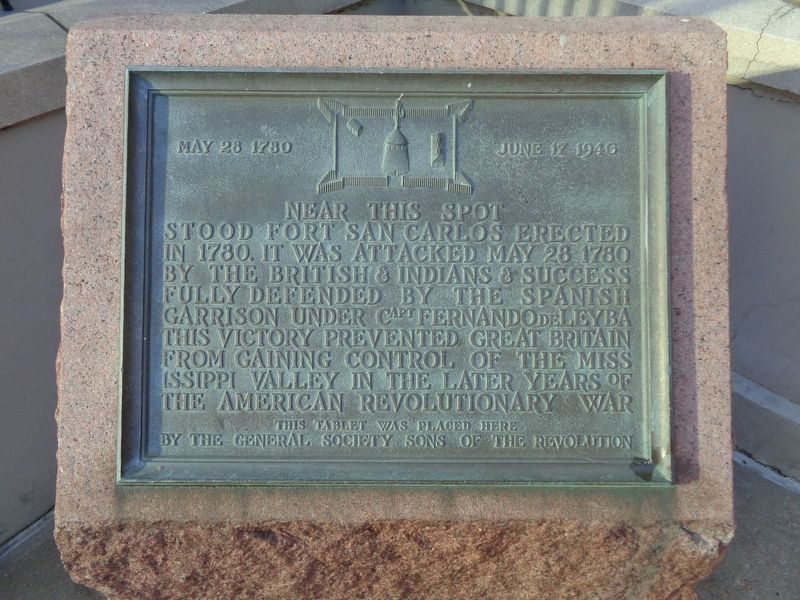 Near this spot stood Fort San Carlos, erected in 1780. It was attacked May 28, 1780 by the British and Indians and successfully defended by the Spanish garrison under Capt Fernando de Leyba This victory prevented Great Britain from gaining control of the Mississippi Valley in the later years of the American Revolutionary War

Near this spot stood Fort San Carlos, erected in 1780. It was attacked May 28, 1780 by the British & Indians & successfully defended by the Spanish garrison under Capt Fernando de Leyba   This victory prevented Great Britain from gaining control of the Mississippi Valley in the later years of the American Revolutionary War

Erected 1946 by General Society Sons of the Revolution.

Topics and series. This historical marker is listed in this topic list: War, US Revolutionary. In addition, it is included in the Sons of the American Revolution series list. A significant historical year for this entry is 1780.

Location. 38° 37.493′ N, 90° 11.432′ W. Marker is in St. Louis, Missouri. Marker is on South Broadway, on the right when traveling south. Marker is located on the grounds of Hilton St. Louis at the Ballpark hotel, near its patio on the left side. Touch for map. Marker is at or near this postal address: 1 South Broadway, Saint Louis MO 63102, United States of America. Touch for directions. 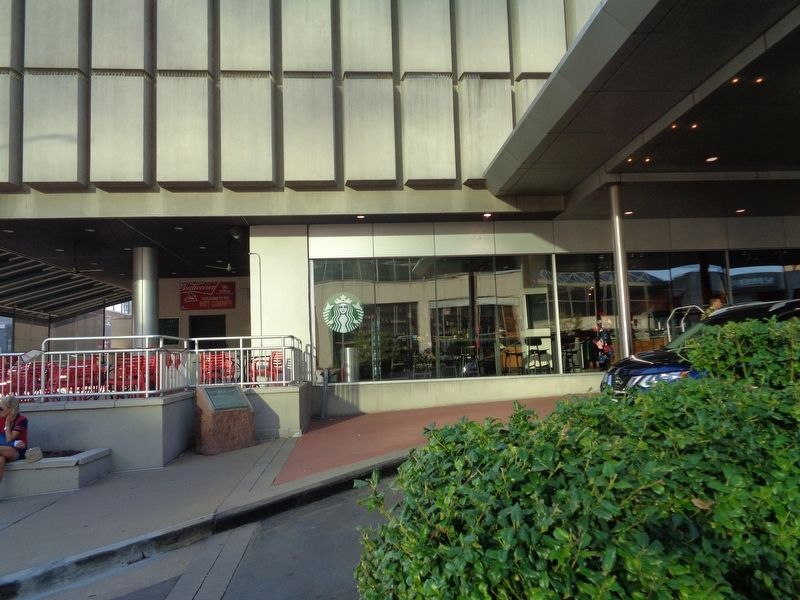 Regarding Fort San Carlos. As the marker states, the Battle of Fort San Carlos, the only battle of the American Revolution fought west of the Mississippi took place on what is now the Ballpark Village site. The fort was located at the corner of present-day 4th and Walnut Streets. Led by the British, it's estimated that somewhere between 1,200 and 2,000 Native American warriors from the Sioux, Chippewa, Menominee, and Winnebago advanced on the Village, attacking the unsuspecting community of 900 people, killing several settlers & slaves who were tending their fields on the outskirts of town.

Spanish Governor, Fernando de Leyba, had ordered 4 stone towers to be built in defense of the city, but at the time of the attack, only one, known as Fort San Carlos, had been completed. Although greatly outnumbered, historians give many reasons why the primarily-French townspeople prevailed that day. One of them being that, was the cannon placed in the tower, which, after running out of cannonballs, began firing pieces of glass & nails. Another reason was the fact that the Indians seemed to be more interested in impressing the other tribes. Instead of attacking together, each tribe would take a turn rushing the fort, fight ferociously, then ride off and the next tribe would take a turn. Later, in the official reports of the British commanders, they said that their Native American allies seemed satisfied with what they did, which was to prove their strength & courage in battle. The British were planning to extend the battle for several days, depleting the settlers supply of food, water, & ammunition. But their losses were so high, the battle only lasted two hours. Twenty-one villagers had been killed, & 71 captured.

Every year (on May 28th), the Fort San Carlos Society commemorates the event at that site by reading the names of the 21 people who lost their lives.