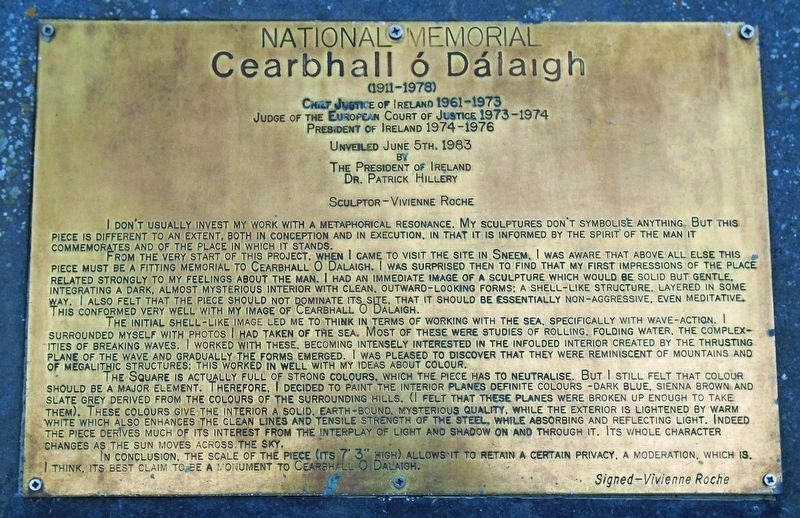 I don't usually invest my work with a metaphorical resonance. My sculptures don't symbolise anything. But this piece is different to an extent, both in conception and in execution, in that it is informed by the spirit of the man it commemorates and of the place in which it stands.

From the very start of this project, when I came to visit the site in Sneem, I was aware that above all else this piece must be a fitting memorial to Cearbhall O Dalaigh. I was surprised then to find that my first impressions of the place related strongly to my feelings about the man. I had an immediate image of a sculpture which would be solid but gentle, integrating a dark, almost mysterious interior with clean, outward-looking forms: a shell-like structure, layered in some way. I also felt that the piece should not dominate its site, that it should be essentially non-aggressive, even meditative. This conformed very well with my image of Cearbhall O Dalaigh.

The initial shell-like image led me to think in terms of working with the sea, specifically with wave-action. I surrounded myself with photos I had taken of the sea. Most of these were studies of rolling, folding water, the complexities of breaking waves. I worked with these, becoming intensely interested in the infolded interior created by the thrusting plane of the wave and gradually the forms emerged. I was pleased to discover that they were reminiscent of mountains and of megalithic structures; this worked in well with my ideas about colour.

The Square is actually full of strong colours, which the piece has to neutralise. But I still felt that colour should be a major element. Therefore, I decided to paint the interior planes definite colours - dark blue, sienna brown and slate grey derived from the colours of the surrounding hills. (I felt that these planes were broken up enough to take them). These colours give the interior a solid, earth-bound, mysterious quality, which the exterior is lightened by warm white which also enhances the clean lines and tensile strength of the steel, while absorbing and reflecting light. Indeed the piece derives much of its interest from the interplay of light and shadow on and through it. Its whole character changes as the sun moves across the sky.

In conclusion, the scale of the piece (its 7' 3" high) allows it to retain a certain privacy, a moderation, which is, I think, its best claim to be a monument to Cearbhall O Dalaigh.

Signed-Vivienne Roche. . This historical marker was erected in 1983 by the People of Ireland. It is in Sneem in County Kerry Munster Ireland