A Tribute and a Gift / Un tributo ed Un Regalo 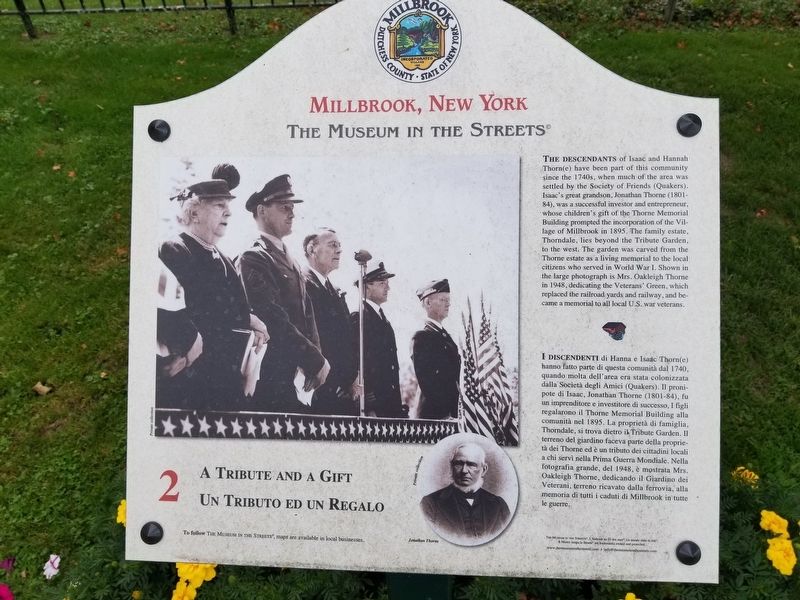 Photographed By Michael Herrick, September 8, 2019
1. A Tribute and a Gift Marker
Inscription.
, A Tribute and a Gift , The Descendants of Isaac and Hannah Thorn(e) have been part of this community since the 1740s, when much of the area was settled by the Society of Friends (Quakers). Isaac's great grandson, Jonathan Thorne (1801-84), was a successful investor and entrepreneur, whose children's gift of the Thorne Memorial Building prompted the incorporation of the Village of Millbrook in 1895. The family estate, Thorndale, lies beyond the Tribute Garden, to the west. The garden was carved from the Thorne estate as a living memorial to the local citizens who served in World War I. Shown in the large photograph is Mrs. Oakleigh Thorne in 1948, dedicating the Veterans' Green, which replaced the railroad yards and railway, and became a memorial to all local U.S. war veterans. , . This historical marker was erected in 2014 by The Museum in the Streets®. It is in Millbrook in Dutchess County New York