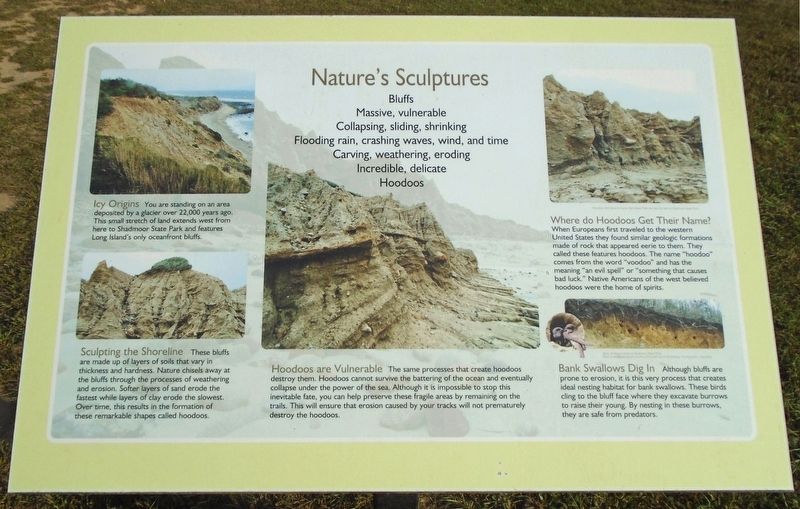 You are standing on an area deposited by a glacier over 22,000 years ago. This small stretch of land extends west from here to Shadmoor State Park and features Long Island's only oceanfront bluffs.

Sculpting the Shoreline These bluffs are made up of layers of soils that vary in thickness and hardness. Nature chisels away at the bluffs through the processes of weathering and erosion. Softer layers of sand erode the fastest while layers of clay erode the slowest. Over time, this results in the formation of these remarkable shapes called hoodoos.

Hoodoos are Vulnerable The same processes that create hoodoos destroy them. Hoodoos cannot survive the battering of the ocean and eventually collapse under the power of the sea. Although it is impossible to stop this inevitable fate, you can help preserve these fragile areas by remaining on the trails. This will ensure that erosion caused by your tracks will not prematurely destroy the hoodoos.

Where do Hoodoos Get Their Name? When Europeans first traveled to the western United States they found similar geologic formations made of rock that appeared eerie to them. They called these features hoodoos. The name "hoodoo" comes from the word "voodoo" and has the meaning "an evil spell" or "something that causes bad luck." Native Americans of the west believed hoodoos were the home of spirits.

Bank Swallows Dig In Although bluffs are prone to erosion, it is this very process that creates ideal nesting habitat for bank swallows. These birds cling to the bluff face where they excavate burrows to raise their young. By nesting in these burrows, they are safe from predators. . This historical marker was erected by New York State Parks. It is in Montauk Point in Suffolk County New York