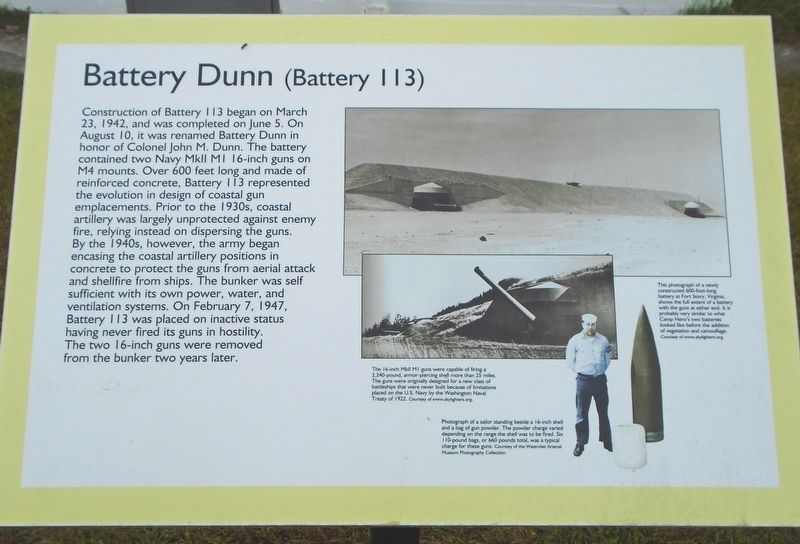 Construction of Battery 113 began on March 23, 1942, and was completed on June 5. On August 10, it was renamed Battery Dunn in honor of Colonel John M. Dunn. The battery contained two Navy MkII 16-inch guns on M4 mounts. Over 600 feet long and made of reinforced concrete, Battery 113 represented the evolution in design of coastal gun emplacements. Prior to the 1940s, coastal artillery was largely unprotected against enemy fire, relying instead on dispersing the guns. By the 1940s, however, the army began encasing the coastal artillery positions in concrete to protect the guns from aerial attack and shellfire from ships. The bunker was self sufficient with its own power, water, and ventilation systems. On February 7, 1947, Battery 113 was placed on inactive status having never fired its guns in hostility. The two 16-inch guns were removed from the bunker two years later.

. The 16-inch MkII M1 guns were capable of firing a 2,240-pound, armor piercing shell more than 25 miles. The guns were originally designed for a new class of battleships that were never built because of limitations placed on the U.S. Navy by the Washington Naval Treaty of 1922.

. Photograph of a sailor standing beside a 16-inch shell and a bag of gun powder. The powder charge varied depending on the range the shell was to be fired. Six 110-pound bags, or 660 pounds total, was a typical charge for these guns.

. This photograph of a newly constructed 600-foot long battery at Fort Story, Virginia, shows the full extent of a battery with the guns at either end. It is probably very similar to what Camp Hero's two batteries looked like before the addition of vegetation and camouflage. . This historical marker was erected by New York State Parks. It is in Montauk Point in Suffolk County New York