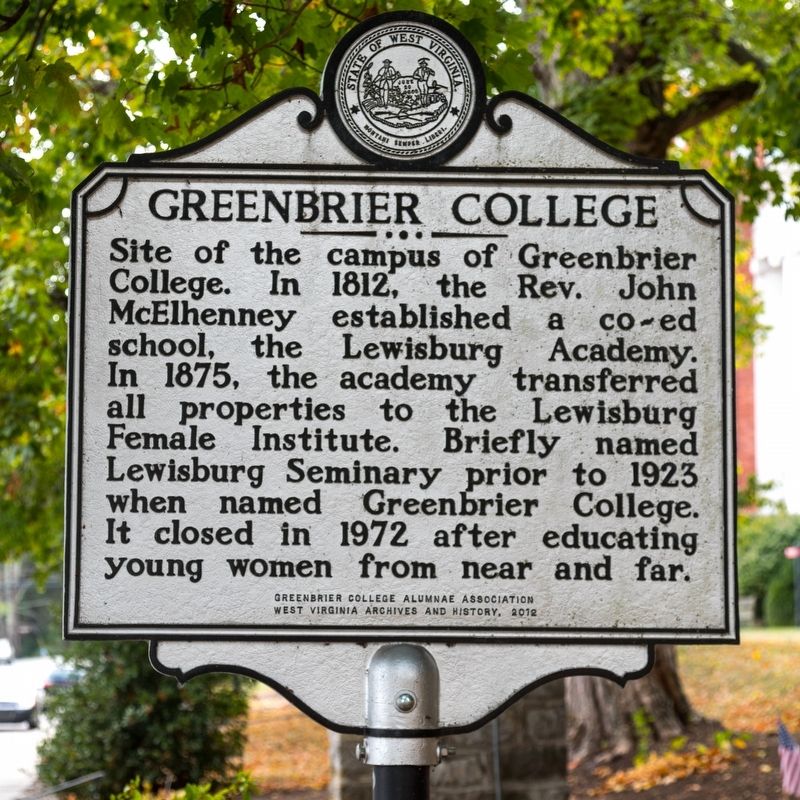 Greenbrier Hall (1921) replaced two halls that burned: 1876-1901, 1902-1921. The hall was the main residence of Greenbrier College. It also housed the library, dining and other facilities. Classrooms, the auditorium and music rooms were in Carnegie Hall (1902). The hall is presently on Greenbrier Valley Campus of the New River Community and Technical College.

Location. 37° 48.133′ N, 80° 26.887′ W. Marker is in Lewisburg, West Virginia, in Greenbrier County. Marker is at the intersection of Church Street and West Foster Street, on the right when traveling south on 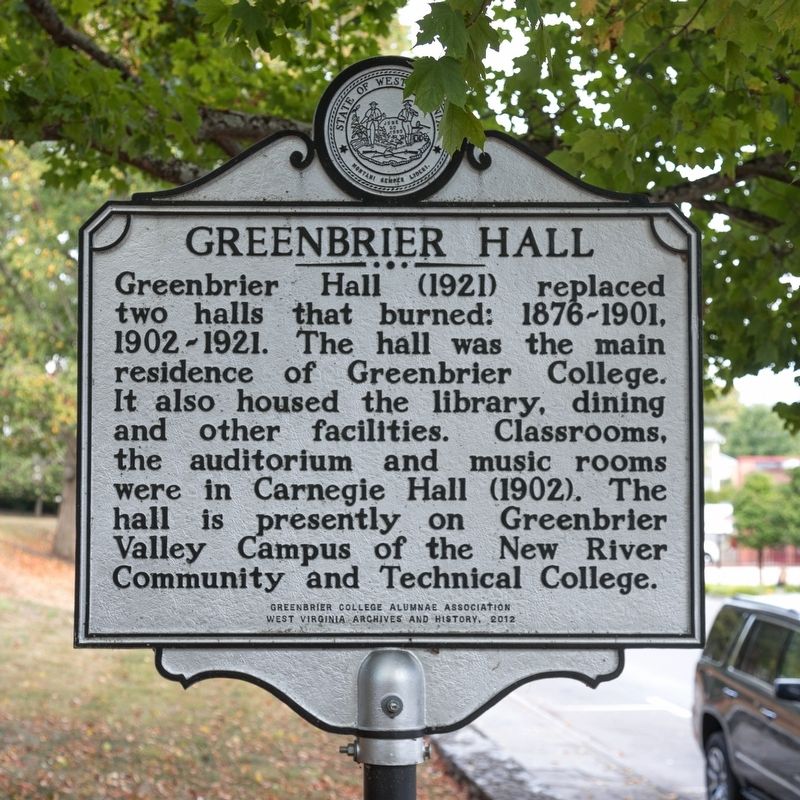 By J. J. Prats, September 14, 2019
2. Greenbrier Hall side of marker
Church Street. Touch for map. Marker is at or near this postal address: 653 Church St, Lewisburg WV 24901, United States of America. Touch for directions.

Regarding Greenbrier College / Greenbrier Hall. This is now the campus of the New River Community and Technical College (Greenbrier Valley Campus).

Also see . . .  Greenbrier College Alumnae Association. Includes photos. “After the Civil War, the Presbytery took over the school and it became the Lewisburg Female Institute; although primarily an upper school, it served the very young girls of the area. In 1911, the name was changed to the Lewisburg Seminary or the Lewisburg Seminary and Music Conservative. The 1914-15 catalog reports that one-third of the faculty were in 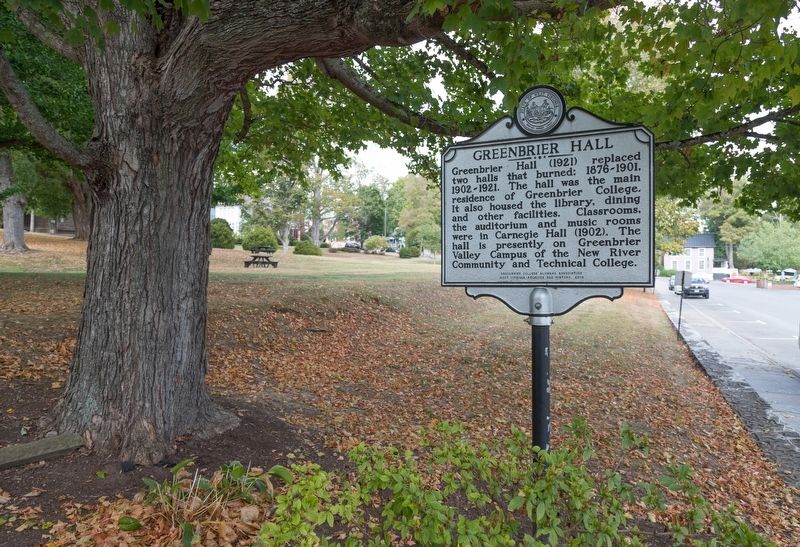 By J. J. Prats, September 14, 2019
3. Greenbrier College / Greenbrier Hall Marker
the music department. In 1923, it became Greenbrier College for Women, chartered by an independent group of citizens and later became a ‘junior college’ offering the last two years of high school and the first two years of college. It maintained a fine academic reputation with students coming from across the United States and abroad. Always small, it provided personal attention and instruction and a haven for developing friendships.” (Submitted on October 7, 2019.) 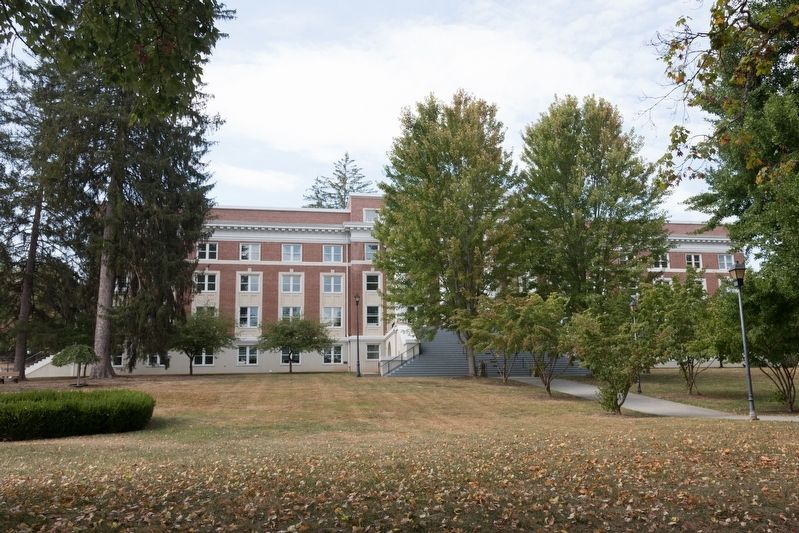 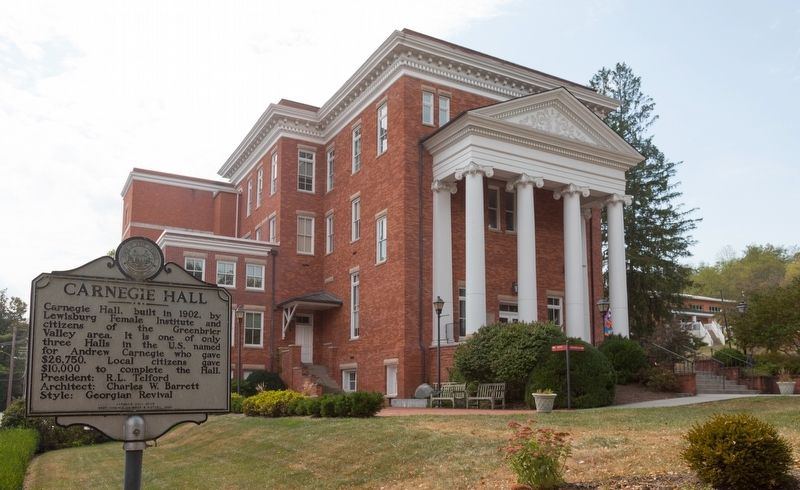 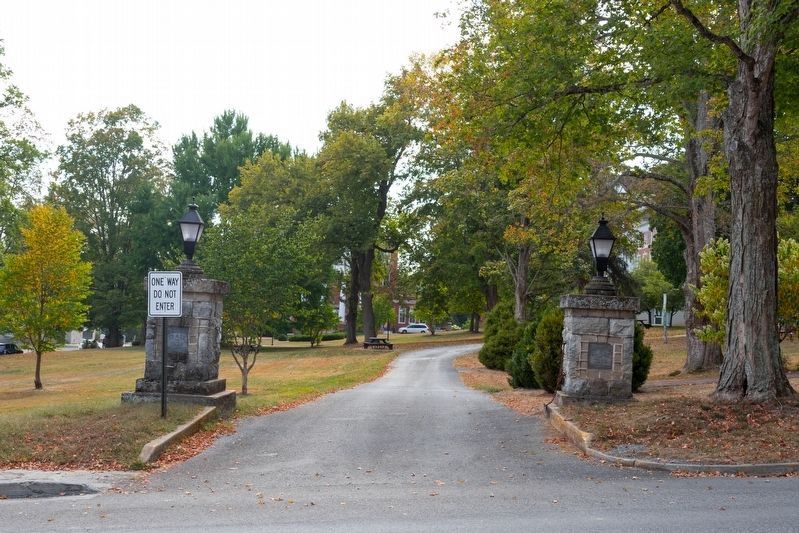 Editor’s want-list for this marker. Photo of North House • Can you help?
Share This Page.