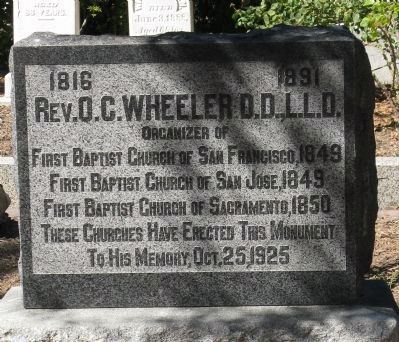 Topics. This historical marker is listed in these topic lists: Cemeteries & Burial Sites • Churches & Religion • Settlements & Settlers. A significant historical year for this entry is 1849.

Location. 38° 33.719′ N, 121° 30.164′ W. Marker is in Sacramento, California, in Sacramento County. Marker and gravesite are located at the Pioneer Cemetery Grove at the Sacramento City Cemetery. Touch for map. Marker is at or near this postal address: 1000 Broadway, Sacramento CA 95818, United States of America. Touch for directions. 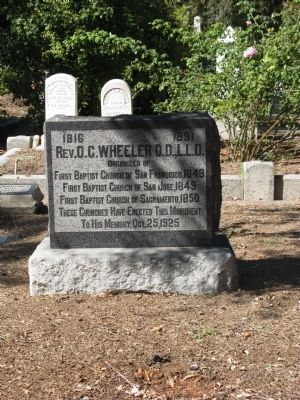 Additional commentary.
1. First Baptist Church.—
Organized May 19, 1850, by Rev. O. C. Wheeler, of San Francisco, who was the first Baptist minister on the Pacific Coast. It had only eight members at the beginning. This small membership could not afford to engage a permanent pastor, and arrangements were made by which monthly meetings were held, which were conducted by Mr. Wheeler. In November of that year a lot was purchased, and a building erected, at the corner of Third and Santa Clara Streets. Here Rev. L. O. Grenell, from the Baptist Home Missionary Society, took temporary charge, and in the following February was elected permanent pastor. The place of meeting was afterwards moved to the corner of Second and San Antonio Streets, where a brick building had been erected for that purpose. In 1877 a new and commodious structure was built, which was burned in 1882. The present tabernacle was then erected. The pastor now officiating is Rev. A. W. Runyon, who was called in 1887.
Source: Churches of Santa Clara County - http://www.mariposaresearch.net/santaclararesearch/SCBIOS/churchespen.html
— Submitted December 2, 2008, by Syd Whittle of Mesa, Arizona.
2. From the Diary of Dr. Israel Lord:
[Sacramento, California 1850] Saturday, Sept.14. Met Rev. Mr. [Osgood C.] Wheeler at Doct. Temple’s office today. He has come up by invitation, to assist in organizing a church here. This evening a considerable number of brethren met at Judge Willis’, and formed a church. Only five letters of dismission were presented and these were constituted members. Enough letters of recommendatory were than produced to increase the number to 15, and the bearers were then received by the church and thus we have the First Baptist Church of Sacramento.
— Submitted December 2, 2008, by Syd Whittle of Mesa, Arizona.
Credits. This page was last revised on July 7, 2019. It was originally submitted on December 2, 2008, by Syd Whittle of Mesa, Arizona. This page has been viewed 1,596 times since then and 8 times this year. Photos:   1, 2. submitted on December 2, 2008, by Syd Whittle of Mesa, Arizona.
Share This Page.