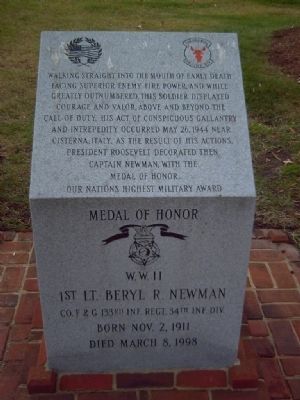 Walking straight into the mouth of early death facing superior enemy fire power and while greatly outnumbered, this soldier displayed courage and valor, above and beyond the call of duty. His act of conspicuous gallantry and intrepidity occurred May 26, 1944 near Cisterna, Italy. As the result of his actions, President Roosevelt decorated then Captain Newman, with the Medal of Honor. Our nation’s highest military award.
Medal of Honor
W.W. II
1st Lt Beryl R. Newman
Co. F. & G, 133rd Inf. Regt. 34th Inf. Div.
Born Nov. 2, 1911
Died March 8, 1998

Topics and series. This historical marker is listed in these topic lists: Heroes • Military • War, World II. In addition, it is included in the Medal of Honor Recipients series list. A significant historical date for this entry is March 8, 1998. 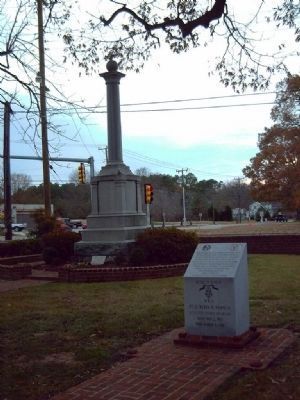 Additional commentary.
1. Medal of Honor Citation
The President of the United States in the name of The Congress takes pleasure in presenting the MEDAL OF HONOR to

Citation:
For conspicuous gallantry and intrepidity above and beyond the call of duty on 26 May 1944. Attacking the strongly held German Anzio-Nettuno defense line near Cisterna, Italy, 1st Lt. Newman, in the lead of his platoon, was suddenly fired upon by 2 enemy machineguns located on the crest of a hill about 100 yards 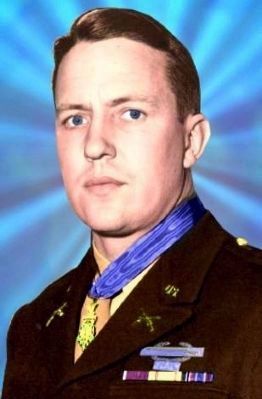 Official US Army photo
3. Beryl R. Newman
to his front. The 4 scouts with him immediately hit the ground, but 1st Lt. Newman remained standing in order to see the enemy positions and his platoon then about 100 yards behind. Locating the enemy nests, 1st Lt. Newman called back to his platoon and ordered 1 squad to advance to him and the other to flank the enemy to the right. Then, still standing upright in the face of the enemy machinegun fire, 1st Lt. Newman opened up with his tommygun on the enemy nests. From this range, his fire was not effective in covering the advance of his squads, and 1 squad was pinned down by the enemy fire. Seeing that his squad was unable to advance, 1st Lt. Newman, in full view of the enemy gunners and in the face of their continuous fire, advanced alone on the enemy nests. He returned their fire with his tommygun and succeeded in wounding a German in each of the nests. The remaining 2 Germans fled from the position into a nearby house. Three more enemy soldiers then came out of the house and ran toward a third machinegun. 1st Lt. Newman, still relentlessly advancing toward them, killed 1 before he reached the gun, the second before he could fire it. The third fled for his life back into the house. Covering his assault by firing into the doors and windows of the house, 1st Lt. Newman, boldly attacking by himself, called for the occupants to surrender to him. Gaining the house, he kicked in the 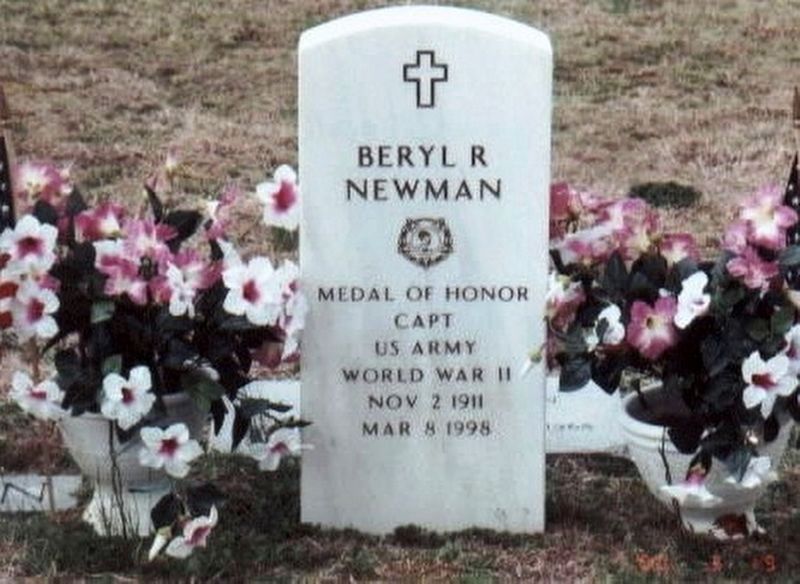 Photographed By Don Morfe, March 19, 2000
4. 1st Lt Beryl R. Newman Grave Marker
He is buried in Remlick Gardens Cemetery, Remlick VA. The grave GPS coordinates are N37.6697 W76.6177
door and went inside. Although armed with rifles and machine pistols, the 11 Germans there, apparently intimidated, surrendered to the lieutenant without further resistance, 1st Lt. Newman, single-handed, had silenced 3 enemy machineguns, wounded 2 Germans, killed 2 more, and took 11 prisoners. This demonstration of sheer courage, bravery, and willingness to close with the enemy even in the face of such heavy odds, instilled into these green troops the confidence of veterans and reflects the highest traditions of the U.S. Armed Forces.