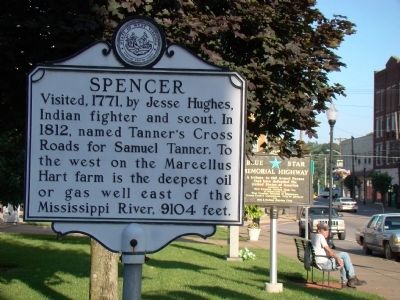 By J. J. Prats, July 14, 2008
1. Spencer Marker
Inscription.
Spencer. . Visited, 1771, by Jesse Hughes, Indian fighter and scout. In 1812, named Tanner’s Cross Roads for Samuel Tanner. To the west on the Marcellus Hart farm is the deepest oil or gas well east of the Mississippi River, 9104 feet. . This historical marker is in Spencer in Roane County West Virginia

Visited, 1771, by Jesse Hughes, Indian fighter and scout. In 1812, named Tanner’s Cross Roads for Samuel Tanner. To the west on the Marcellus Hart farm is the deepest oil or gas well east of the Mississippi River, 9104 feet.

Topics and series. This historical marker is listed in these topic lists: Natural Resources • Political Subdivisions. In addition, it is included in the West Virginia Archives and History series list. 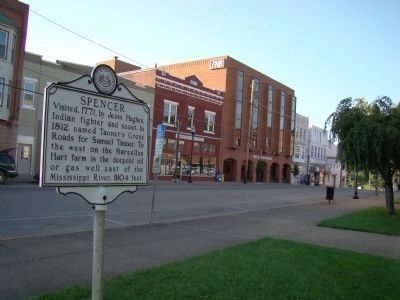 By J. J. Prats, July 14, 2008
2. Main Street in Spencer and Marker
also named Spencer (within shouting distance of this marker); Roane County / Jackson County (approx. 9.3 miles away); Pocatalico River (approx. 11.6 miles away); Rathbone Well (approx. 13.2 miles away). Touch for a list and map of all markers in Spencer.

Regarding Spencer. The Marcellus Shale Formation that lies under most of West Virginia was not named for the Marcellus Hart farm, but for a distinctive outcrop near the village of Marcellus, New York.

Also see . . .  Marcellus Shale - Appalachian Basin Natural Gas Play. This article contains maps and a description of the Marcellus oil and gas deposit. “The Marcellus Shale, also referred to as the Marcellus Formation, is a Middle Devonian-age black, low density, carbonaceous (organic rich) shale that occurs in the subsurface beneath much of Ohio, West Virginia, Pennsylvania and New York. Small areas of Maryland, Kentucky, Tennessee, and Virginia are also underlain by the Marcellus Shale.” (Submitted on December 4, 2008.) 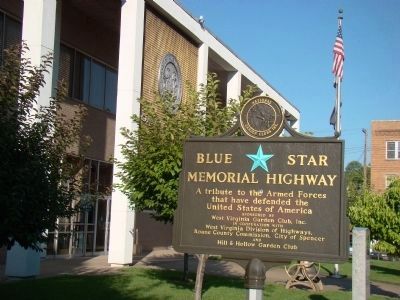 By J. J. Prats, July 14, 2008
3. Nearby Blue Star Memorial Highway
Route 33 through Spencer is a Blue Star Memorial Highway. “A tribute to the Armed Forces that have defended the United States of America.” These non-historical markers are a project of the National Garden Clubs and this particular one was “sponsored by West Virgiia Garden Club, Inc., in cooperation with West Virginia Division of Highways, Roane County Commission, City of Spencer and Hill & Hollow Garden Club.” 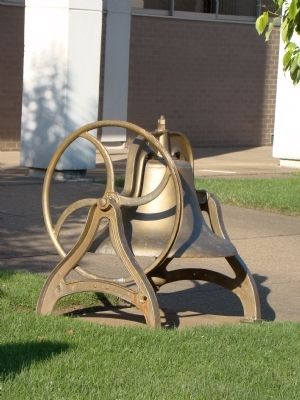