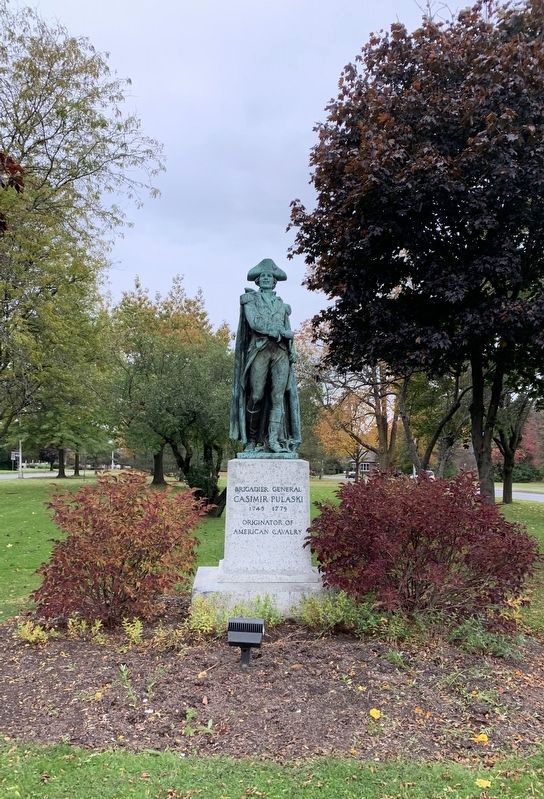 Regarding Casimir Pulaski. Born on March 4th, 1745, in Warsaw, Casimir Pulaski grew up as a privileged aristocrat, but ended up fighting for liberty in Poland and America. With a rare combination of courage and military skills, made a significant impact on the course of the Revolutionary War.


He arrived in America in to participate in the Battle of the Brandywine. As the British forced the Americans off the field on the 11th of September, Washington realized, to his horror, that the right flank of his army was about to collapse, potentially causing a general rout and destroying his army. Pulaski volunteered to countercharge the British and give the Continentals time to withdraw in good order. With no time to argue, Washington entrusted Pulaski with his own mounted guard, about thirty in number, and watched as the Polish volunteer led his band directly into the fray, delaying the British long enough for the Continentals to retreat and possibly saving Washington’s life.


Pulaski spent most of his generalship leading small bands of horsemen on scouting patrols are raiding parties, as the Continental Army did not generally have a cavalry arm to speak of when he arrived. To him though, such a situation was unacceptable, and began working to rectify the issue. In the early spring of 1778, he offered to raise an independent cavalry unit for the army and was allowed to do so with little supervision or collaboration with his American counterparts, mostly because they hated working with him and dealing with his vain, arrogant demeanor.

In 1779, Washington sent Pulaski south to Charleston to support General Benjamin Lincoln in his march to recover Savannah, Georgia from British occupation. On the last day of the Siege of Savannah, Pulaski attempted to rally a group of fleeing Frenchmen by charging a British position, but was sadly struck by grapeshot and died some days later. He was buried with full honors at an unknown location, and his Legion was incorporated into the rest of the Continental Army.