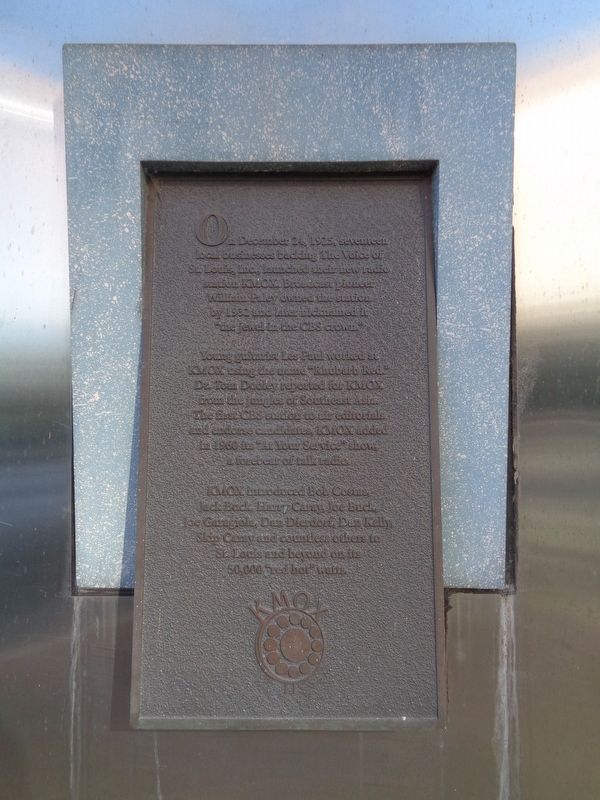 On December 24, 1925, seventeen local businesses backing The Voice of St. Louis, Inc., launched their new radio station KMOX. Broadcast pioneer William Paley owned the station by 1932 and later nicknamed it "the jewel in the CBS crown."

Young guitarist Les Paul worked at KMOX using the name "Rhubarb Red." Dr. Tom Dooley reported for KMOX from the jungles of Southeast Asia. The first CBS station to air editorials and endorse candidates, KMOX added in 1960 its "At Your Service" show, a forebear of talk radio.

Topics. This historical marker is listed in this topic list: Communications. A significant historical date for this entry is December 24, 1925.

Location. 38° 37.497′ N, 90° 11.286′ W. Marker is in St. Louis, Missouri. Marker is on Market Street just west of Memorial Drive, on the left when traveling west. Marker is mounted at eye-level, directly on the Gateway Tower building at this address, facing the Luther Ely 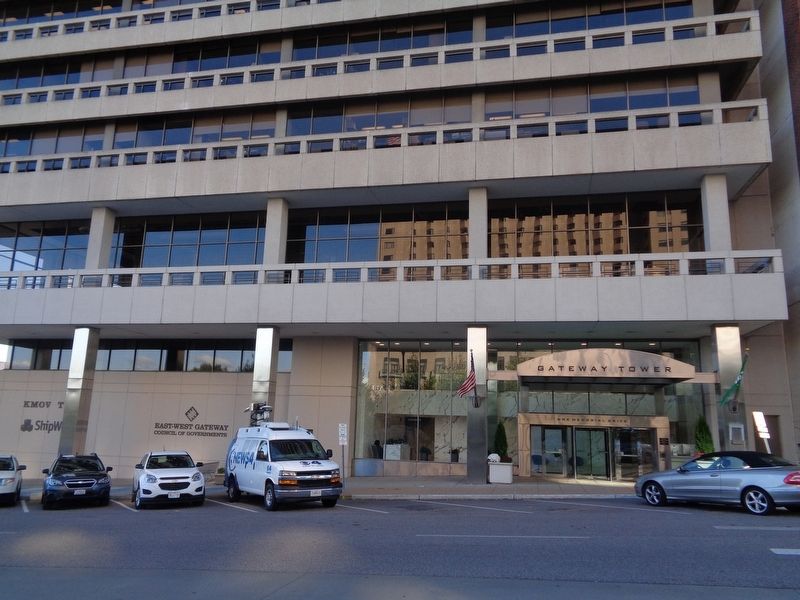 Photographed By Jason Voigt, October 22, 2019
2. Gateway Tower building
Marker is on the right next to the main entrance

Click or scan to see
this page online
Smith Park. It is in front of the main entrance. Touch for map. Marker is at or near this postal address: 1 Memorial Drive, Saint Louis MO 63102, United States of America. Touch for directions.

Regarding KMOX. KMOX-AM continues to be one of the top radio stations in St. Louis, as well as the Midwestern United States. It is considered to be one of the first 24/7 talk radio stations in the United States. Four of St. Louis' major sports teams would be broadcast on KMOX: the St. Louis Blues (hockey) and St. Louis Cardinals (baseball) - both of which the station has the rights to (as of 2019); and the defunct teams, the St. Louis Hawks (NBA) and the St. Louis Cardinals (football). It is not known the reasoning behind the call letters, but one local legend suggests "Kirkwood Missouri On Xmas", as the station's original transmitter was in Kirkwood.

The station was housed in a few other places in St. Louis, including the Merchandise Mart building (where Busch Stadium sits now). It wasn't until 1968 that KMOX would move into the Gateway Tower building, where it would share its headquarters with their sister stations, KMOX-FM (which ended in 1982) and KMOX-TV (now KMOV-TV, a CBS affiliate). In October of 2012, the station's studios and offices moved to its current location at the corner of Tucker and Olive Streets in the Park Pacific building. KMOV still operates in the Gateway Tower.