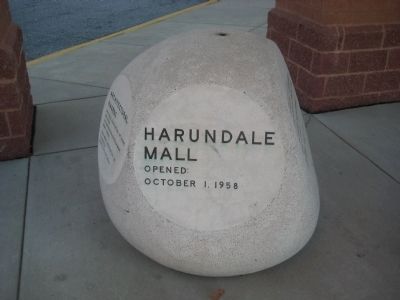 Photographed By F. Robby, November 28, 2008
1. Harundale Mall Marker
Inscription.
Harundale Mall. Opened: October 1, 1958. This site was originally settled in 1649 and was known as the Westminster parish. About 1780 it was the property of Francis Cromwell, a cousin of the monarch of England. It was obtained by the Curtis Creek Mining Co. in 1850 from the estate of John Glenn. In 1908, the state used the site as a rifle range and an army camp was set up here during World War I. . This historical marker was erected in 1958 by Community Research and Development, Inc.. It is in Glen Burnie in Anne Arundel County Maryland

This site was originally settled in 1649 and was known as the Westminster parish. About 1780 it was the property of Francis Cromwell, a cousin of the monarch of England. It was obtained by the Curtis Creek Mining Co. in 1850 from the estate of John Glenn. In 1908, the state used the site as a rifle range and an army camp was set up here during World War I.

Topics. This historical marker is listed in these topic lists: Colonial Era • Industry & Commerce • Military • Settlements & Settlers • War, World I. A significant historical year for this entry is 1649.

Location. 39° 9.094′ N, 76° 36.938′ W. Marker is in Glen Burnie, Maryland, in Anne Arundel County. Marker can be reached from the intersection of Ritchie Highway (Maryland Route 2) and Aquahart Road when traveling south. Marker is located between two buildings within the Harundale Plaza, near the post office. Touch for map. Marker is at or near this postal address: 7700 Ritchie Highway, Glen Burnie MD 21061, Glen Burnie MD 21061, United States of America. Touch for directions.

Other nearby markers. At least 8 other markers are within one mile 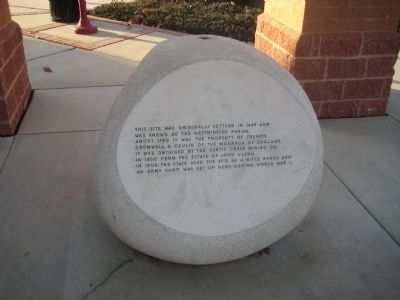 Photographed By F. Robby, November 28, 2008
2. Harundale Mall Marker
This side of the marker contains the historical references to the aren in which the Harundale Mall was built.

More about this marker. This marker used to be located within and was a prominent feature of the Harundale Mall

Harundale Mall took itself seriously and a signature "rock" was located in the northeastern end of the mall memorializing the mall's construction and those who constructed it. The rock was four sides and the sides contained the following information: 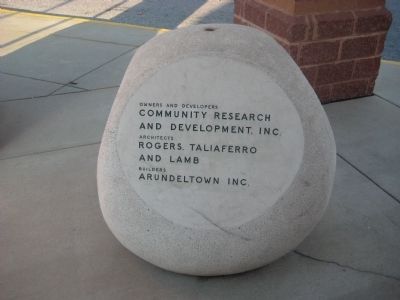 Photographed By F. Robby, November 28, 2008
3. Harundale Mall Marker
This side lists the owners, architects, and builders of the original mall.
a history of the site including information about Native Americans, the Glenn family, and military usage.

Other features in the mall were as follows: A water fountain was located next to the rock and a set of stairs to the second floor offices allowed mall-goers to watch the water from the fountain "top out" and fall back into the fountain's pool below. Mall-goers could also throw coins into the fountain's pool from the stairs. In addition to the mall offices, a "community room", and restrooms, the second floor had an entrance to the second floor of the Hochschild Kohn's Department Store. Hochschild Kohn's was the only store in the mall with two stories. However, in each store there was usually a store room with an upstairs area that was used as a stock or storage area. The mall was quite known for flooding in heavy rains, due to the original "flat" roof. Many merchants can attest to cleaning water from these storage areas when it rained. At one point in the mall's history, a Horn and Horn Smorgasbord Cafeteria operated on the second floor as well. This had originally opened as a "Hochschild's Tea Room" cafe. Horn and Horn stayed opened at this location until 1989. The second floor "community room" could be rented for weddings and provided a place for public meetings. For many years, on the opposite end of the mall from the "rock," large cages featured talking Myna birds. 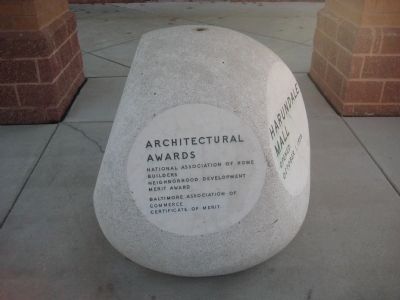 Photographed By F. Robby, November 28, 2008
4. Harundale Mall Marker
This side lists the awards won by the Mall's architects.
the Harundale Mall was a strip shopping center in the south eastern corner of the mall property. This strip center originally included an Eddie's Super Market and a White Coffee Pot Restaurant.

When Harundale Mall opened, it had two major anchors that were Hochschild Kohn's and Food Fair. It also had three other smaller anchors that were Read's Drug Store (with a soda fountain), S.S. Kresge five and dime store, and G.C. Murphy five and dime store. Harundale also had about 50 other smaller tenants and food establishments. One of the more noteworthy food establishments was an eatery towards the center of Harundale Mall which for many years was the Italian Delight Restaurant. This restaurant featured a "below grade" floor. As a result, the workers at this establishment ended up looking much shorter than the average mall-goer standing "at grade".

The mall opened to much fanfare in 1958. Traffic was backed up for two miles on Maryland Route 2 just to get on the parking lot on opening day. This was truly something people had never seen before. Several politicians (including John F. Kennedy, the junior Senator from Massachusetts) were even present for the opening day. Harundale Mall was a major shopping destination for over 30 years. 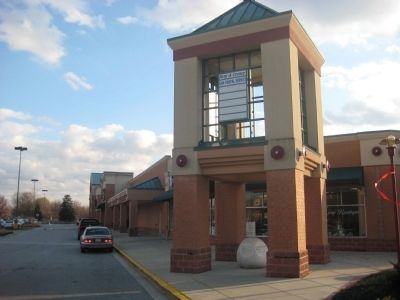 Photographed By F. Robby, November 28, 2008
5. Harundale Mall Marker
The marker is located beneath this canopy near the post office store front of the Harundale Plaza. 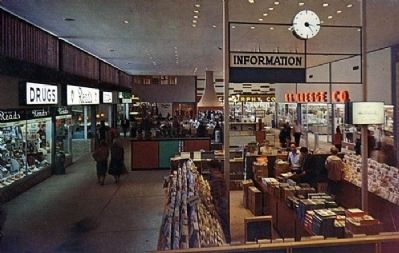