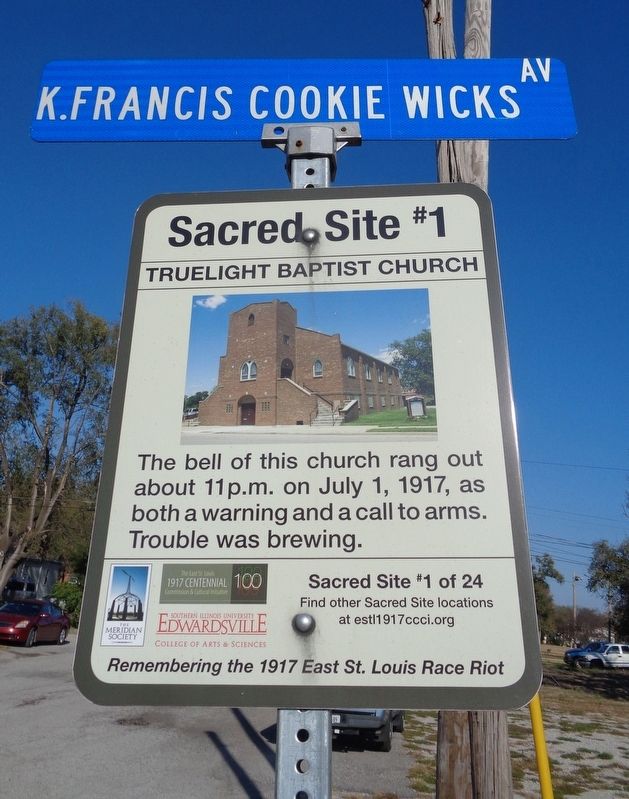 By Jason Voigt, November 5, 2019
1. Truelight Baptist Church Marker
Inscription.
Truelight Baptist Church. Remembering the 1917 East St. Louis Race Riot. The bell of this church rang out about 11p.m. on July 1, 1917, as both a warning and a call to arms. Trouble was brewing. . This historical marker was erected in 2017 by The East St. Louis 1917 Centennial Commission and Cultural Initiative, the Meridian Society, Southern Illinois University Edwardsville. It is in East St. Louis in St. Clair County Illinois

Topics and series. This historical marker is listed in these topic lists: African Americans • Churches & Religion. In addition, it is included in the Illinois, Remembering the 1917 East St. Louis Race Riot series list. A significant historical date for this entry is July 1, 1917. 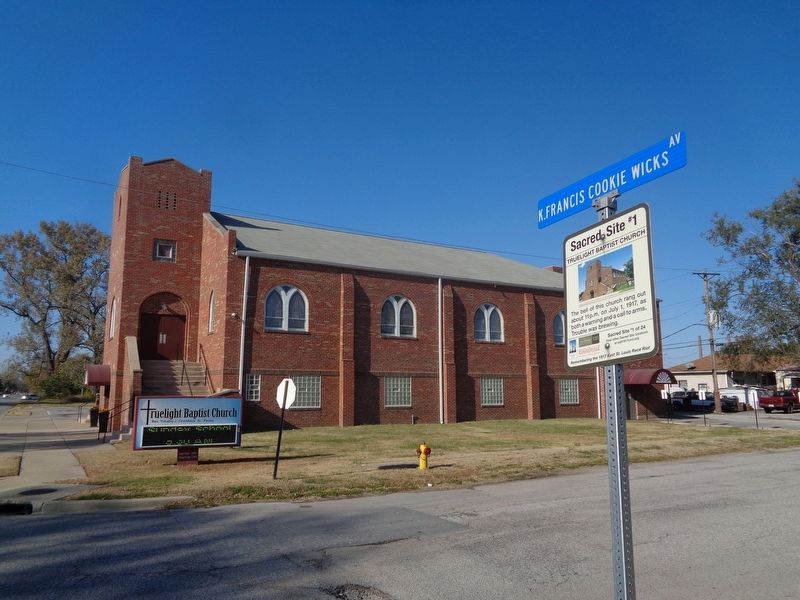 By Jason Voigt, November 5, 2019
2. Truelight Baptist Church Marker
Church is in the background

Regarding Truelight Baptist Church. On Monday, July 2, 1917, black and white residents of industrial East St. Louis, Illinois, witnessed their city plunged into a second round of racial violence, just 35 days after the eruption of racial conflict on May 28. It was also shortly after the United States entered World War I. Unlike the May event, the July race riot reached more horrific levels. There were numerous causes, mostly relating to white individuals seeking the revenge on black townspeople for killing two plain-clothes police detectives by armed black militiamen - who mistakenly thought the detectives were white drive-by shooters who terrorized black neighborhoods during June. This made national attention, as it shocked Americans who thought an outbreak of mass racial violence could ever happen in an industrialized city in a northern state.

The violence that erupted on July 2 was long-simmering. For months, the African-American community prepared for the possibility of violence, and church bells were used as a warning to be ready. Whites attacked the South End neighborhood regularly that summer. On the night of July 1, a car of assailants drove along Market Street firing shots into homes. As the church bell rang out, armed African Americans gathered to defend their neighborhood. The response was presented at trial as evidence that African Americans, not whites, started the conflict.