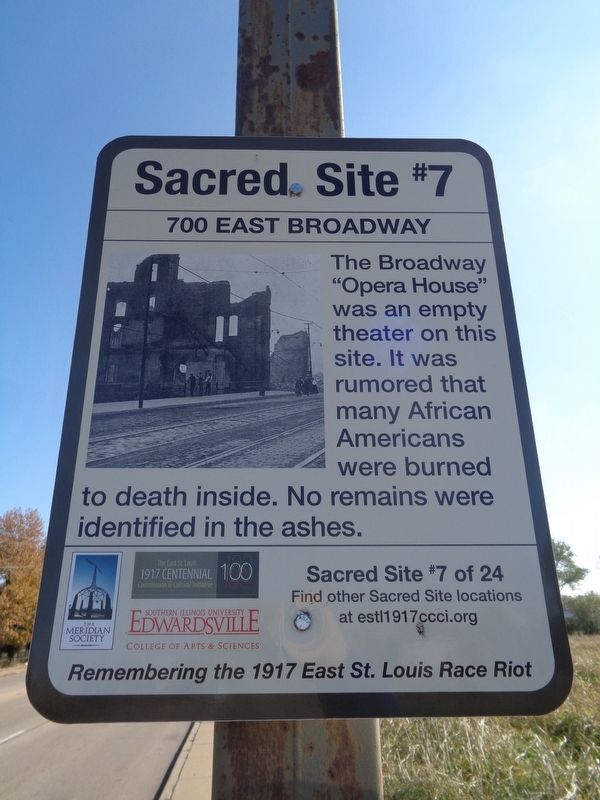 By Jason Voigt, November 5, 2019
1. 700 East Broadway Marker
Inscription.
700 East Broadway. Remembering the 1917 East St. Louis Race Riot. The Broadway "Opera House" was an empty theater on this site. It was rumored that many African Americans were burned to death inside. No remains were identified in the ashes. . This historical marker was erected in 2017 by The East St. Louis 1917 Centennial Commission and Cultural Initiative, the Meridian Society, and Southern Illinois University Edwardsville. It is in East St. Louis in St. Clair County Illinois

The Broadway "Opera House" was an empty theater on this site. It was rumored that many African Americans were burned to death inside. No remains were identified in the ashes.

Topics and series. This historical marker is listed in these topic lists: African Americans • Arts, Letters, Music. In addition, it is included in the Illinois, Remembering the 1917 East St. Louis Race Riot series list. A significant historical month for this entry is July 1917.

Location. 38° 37.357′ N, 90° 9.544′ W. Marker is in East St. Louis, Illinois, in St. Clair County. Marker is at the intersection of East Broadway (Illinois Route 15) and North 7th Street, on the right when traveling east on East Broadway. Touch for map. Marker is at or near this postal address: 6 Riverpark Drive, East Saint Louis IL 62201, United States of America. Touch for directions.

Other nearby markers. At least 8 other markers are within walking distance of this marker. S. 8th St. and E. Broadway (about 300 feet away, measured in a direct line); S. 6th St. and Railroad Ave. (about 700 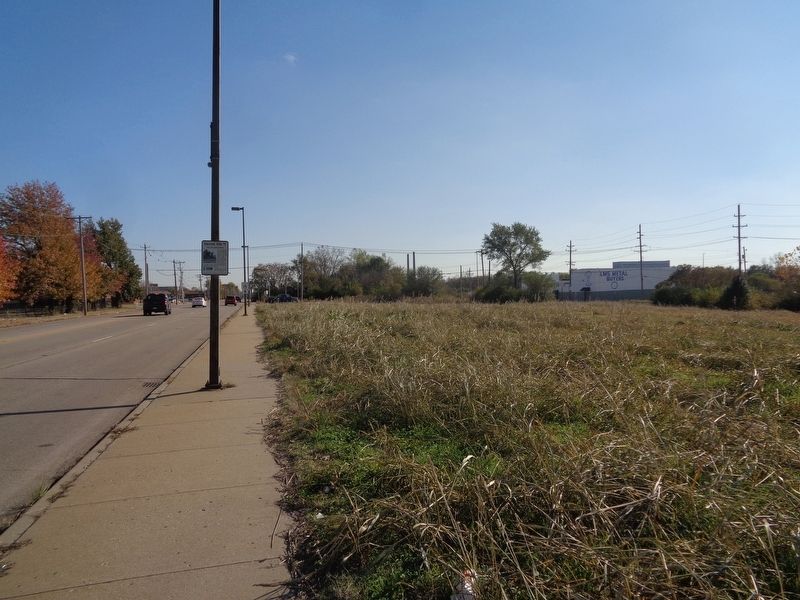 By Jason Voigt, November 5, 2019
2. 700 East Broadway Marker
An empty lot sits to the side of the marker, where a theater once stood

Regarding 700 East Broadway. Bystanders claimed to have seen men, women and children seek refuge in the basement of the building. Officially, no bodies were found, but the remains may have been incinerated. Firefighters could not save the theater, but did stop the fire from spreading to a nearby factory storing 1,000 gallons of oil and gas. The library that was next door to the theater was also saved. The theater was originally known as the McCasland Opera House, when it was opened in 1890.