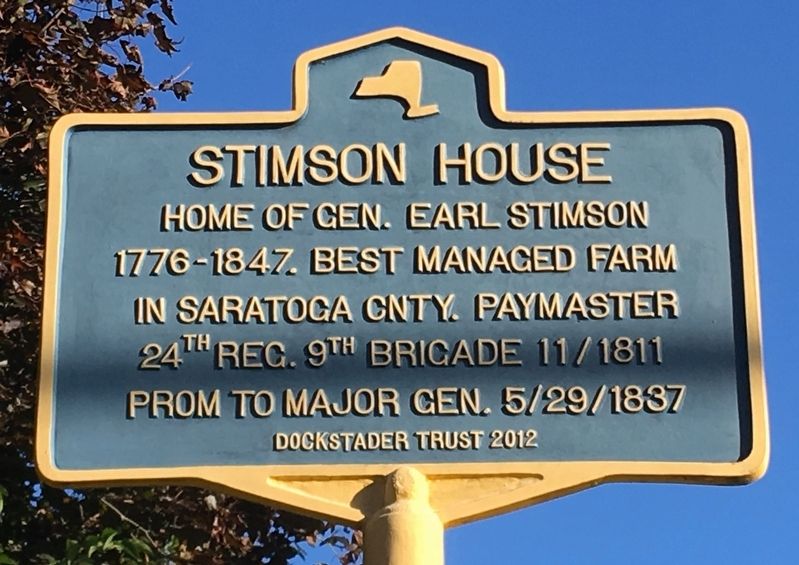 Location. 43° 1.038′ N, 74° 3.234′ W. Marker is near Galway, New York, in Saratoga County. Marker is at the intersection of Perth Road and Lake Road, on the right when traveling west on Perth Road. The historical marker is located roadside on the northwest corner of the intersection of Perth Road and Consaul Road, at the southern end of Lake Road. Touch for map. Marker is in this post office area: Galway NY 12074, United States of America. Touch for directions.

Galway is home to eight New York State Historical Markers. One of these markers commemorates a homestead owned by a prominent figure in the town’s early history.

Earl Stimson was a businessman, a farmer, and served in the State Militia, being promoted 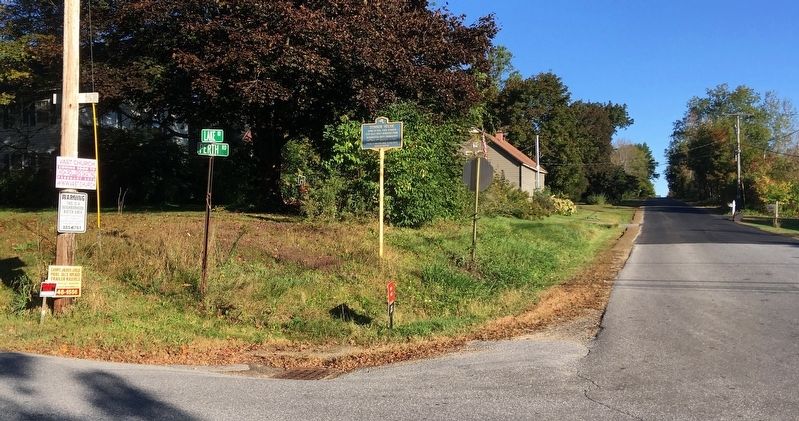 By Howard C. Ohlhous, October 5, 2019
2. Stimson House Marker
to Paymaster, Captain, and later Major General. He operated the best-managed farm in the Galway, New York area, as well as a hotel, boarding house, meatpacking plant, and several stores. Stimson was one of the town’s leading citizens of his day.

Stimson’s 700-acre homestead was quite extensive. In May, 1835, New York Farmer and American Gardener’s Magazine stated, “...the dwelling house and numerous out-buildings, placed on a commanding eminence, had more the appearance of a village than the domain of a private individual.” In addition to the spacious house, there were several barns and stables, a large store, a granary, a cider house, a slaughterhouse, a cooper’s shop, a potash establishment, a blacksmith’s shop, and smaller dwelling houses.

The historical marker is located in front of the home on the northwest corner of the intersection of Perth Road and Consaul Road, at the southern end of Lake Road.

Thanks to Phyllis Keeler and Tom Cwiakala who published a detailed write-up of this historical marker in the Fall 2011 issue of the Galway Reader.