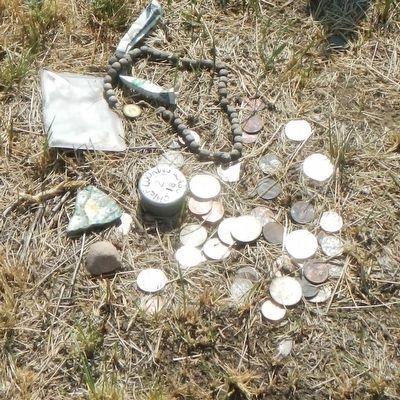 More about this marker. About 150 stakes are located on the Bear Paw Battlefield.

Regarding McWhorter Stakes. "...One of the easiest ways to explain the (McWhorter) markers is to show the Noyes Map.  However, what I have is a large format paper 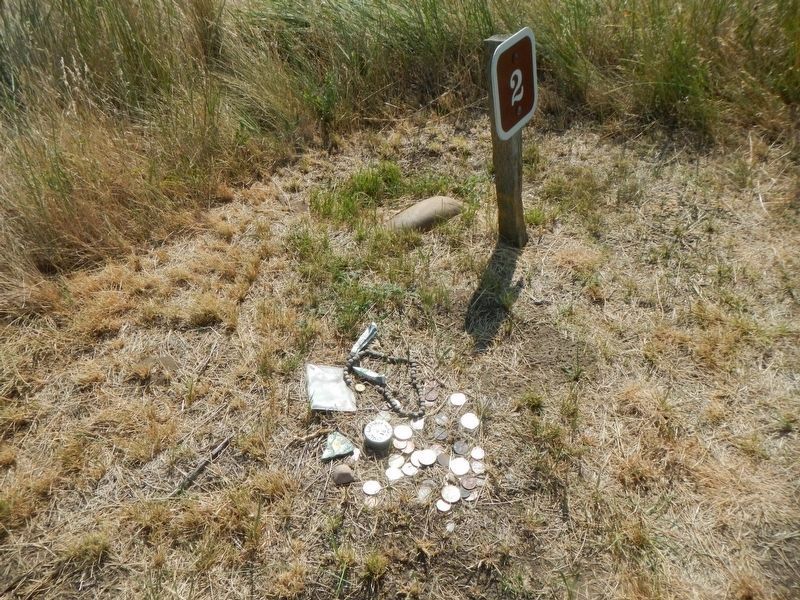 The original markers were wooden stakes.  Yellow Wolf, White Hawk, Black Eagle, Many Wounds, and Peo Peo Tholekt, all survivors of the war returned with McWhorter a couple of times in the 20s and 30s to place the markers.  They marked what was significant in their  memory; where people camped before the attack, where people fought during the initial charge, where they defended for days in the snow, and some locations where people fell.
Between the battle and those folks returning, the new settlers in the area worked to ensure that the battlefield was preserved.  The local surveyor, C.R. Noyes, produced a survey map of the entire battlefield in the 30s incorporating the stakes placed by the Nez Perce and surveying the soldier positions.  They probably worked together on a couple of occasions but that is just my own speculation, I cannot recall if I've read that.
The metal stakes replaced the original markers.  Noyes marked over 150 spots on his survey map.  I believe the numbers on the stakes denote the survey station on top, and the stake number on the bottom.  There are legends on his map for what each stake marks.
There are a few spots where you can still find a 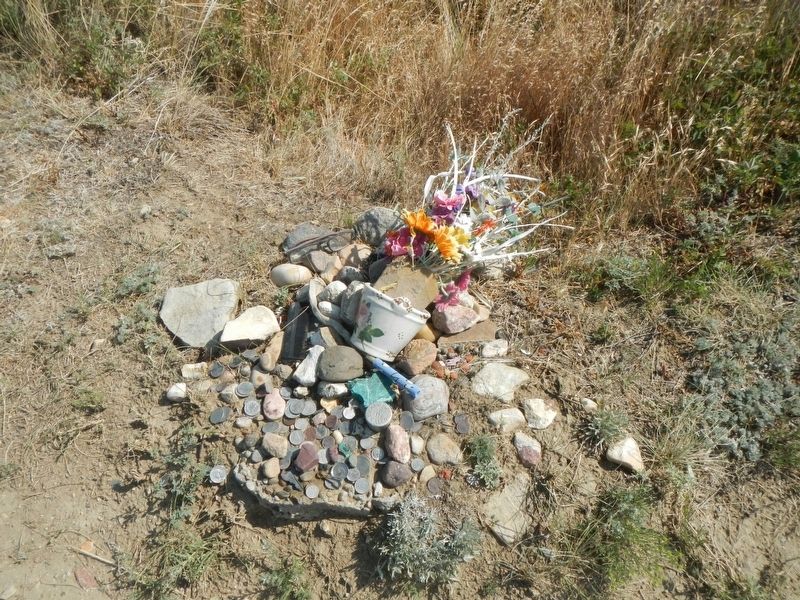 Also see . . .
1. The McWhorter Era -- Big Hole Battlefield Administrative History, Chapter 3. McWhorter was a cattle rancher and historian who had an abiding interest in Indians. According to his biographer, McWhorter's reading of frontier history "convinced him that the American Indians had been 'cold-decked' . . . and their heroic defense of their homes and families constituted a true American epic." ... McWhorter was interested in recovering more details about the battle, believing that "Indian narrations are entirely different from that of the average white person." ... McWhorter made yet another trip in August 1935, this time with Sam Lott and Chief White Hawk. The main purpose of the trip was to restake the Bear's Paw battlefield. The original stakes from 1927 were in poor condition.... (Submitted on November 15, 2019, by Barry Swackhamer of Brentwood, California.) 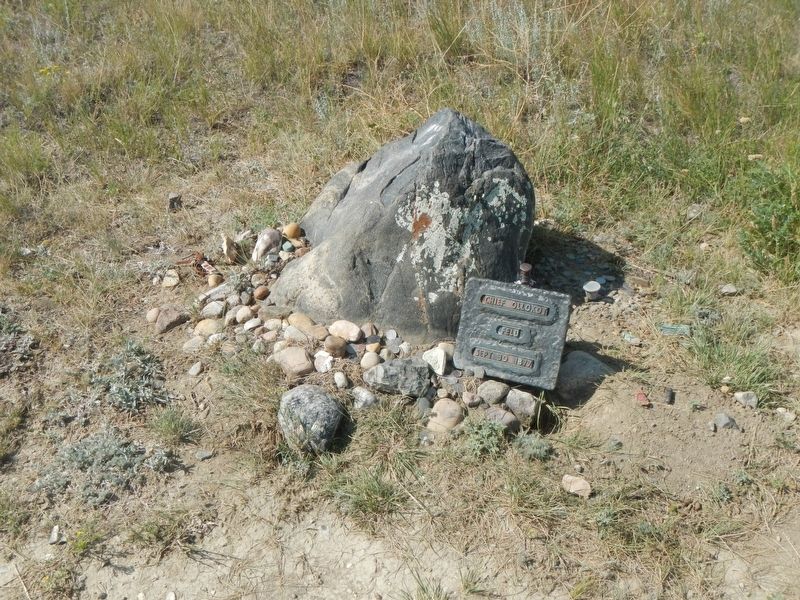 By Barry Swackhamer, August 15, 2019
4. Chief Ollokot Fell September 30 1877 (stake 6 / 117)
and spiritualism, Nez Perce culture Notable works Hear Me, My Chiefs Yellow Wolf, His Own Story Notable awards Was given a name by the Yakama Nation, "Big Foot".[1] Adopted into the Yakima Nation and given another name, Hemene Ka-Wan (Old Wolf).[2] Spouse Adelia A. Swisher (married 1883)[1] C. Annie Bowman (married 1895)[1] Children Ovid Tullius McWhorter (born 1884)[1] Iris Oresta McWhorter (born 1886)[1] Virgil Oneco McWhorter (born 1888)[1] Lucullus Virgil McWhorter ... was an American farmer and frontiersman who documented the historical Native American tribes in West Virginia and the modern-day Plateau Native Americans in Washington state. ...he moved to the frontier of Yakima, Washington, in the eastern part of the state. He became a rancher and activist, learning much from his Yakama Nation neighbors and becoming an activist for them....His published studies were anthropological, documenting the culture and history of the tribes. (Submitted on November 20, 2019, by Barry Swackhamer of Brentwood, California.) 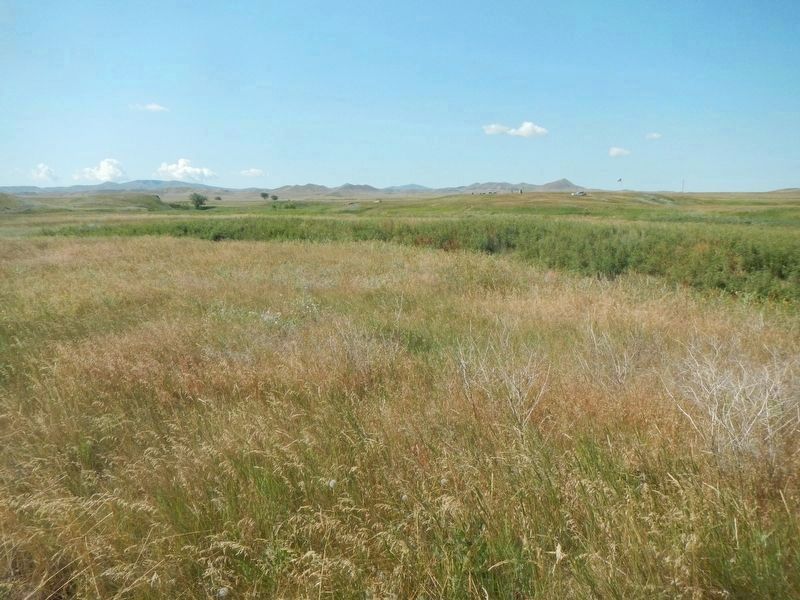 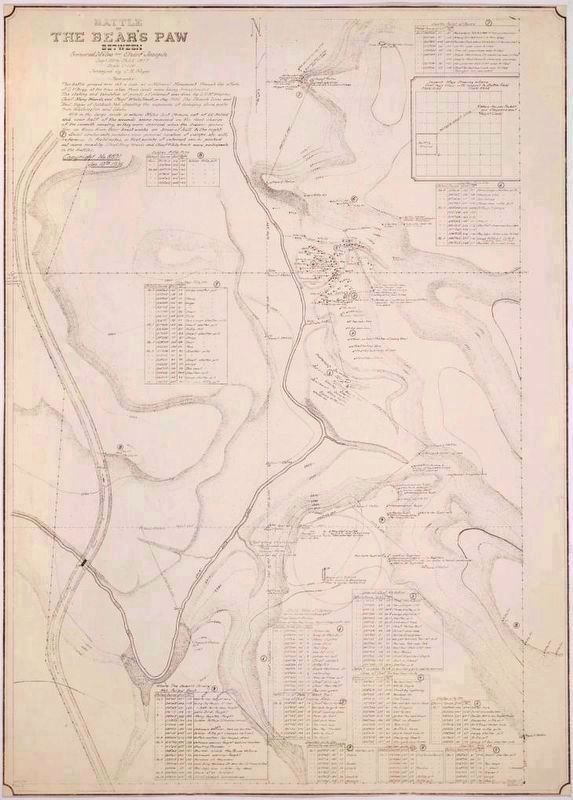 By Montana Memory Project
6. Noyes Map of the Bear Paw Battlefield
Go to the website for the best copy of this map. 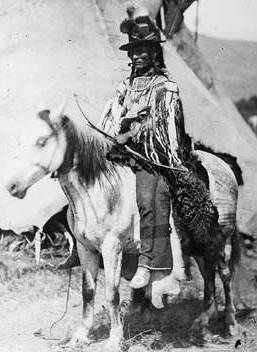 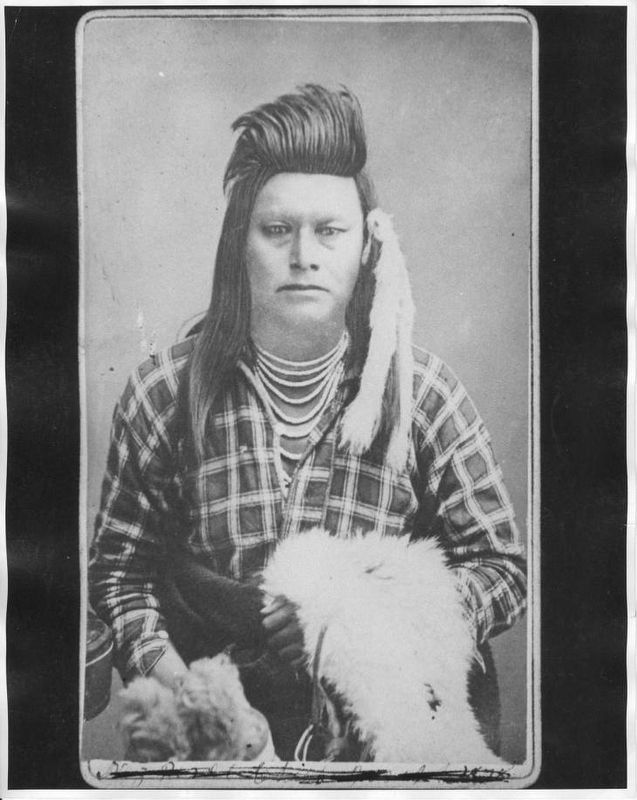 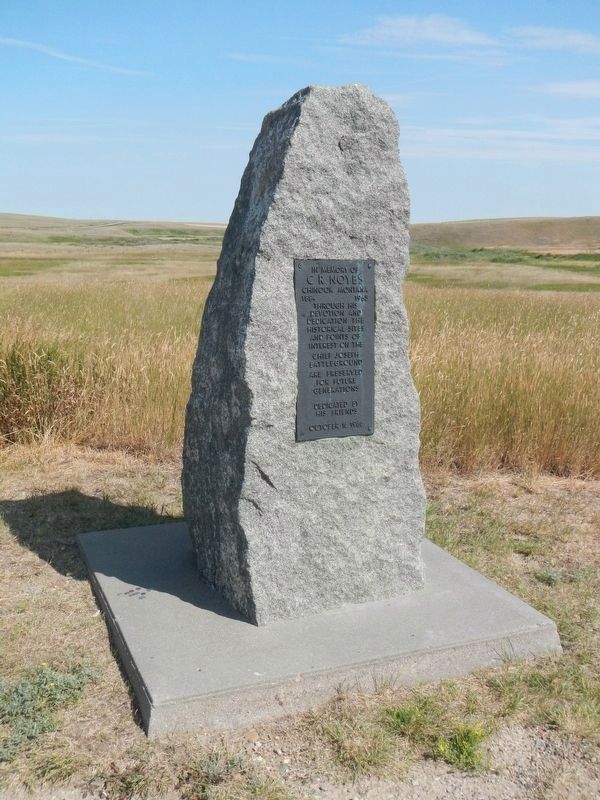 By Barry Swackhamer, August 15, 2019
9. C.R. Noyers Monument
In memory of
C.R. Noyers
Chinook Montana
1884 - 1965
Through his devotion and dedication the historical site and points of interest on the
Chief Joseph Battlefield
are preserved for future generations.
Dedicated by his friends
October 16, 1966 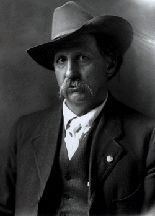