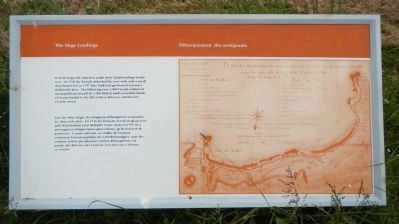 By Barry Swackhamer, July 3, 2014
1. The Siege Landing Marker
1757 French map of the Kennington Cove defences on the right.
Inscription.
English: . In both sieges the attackers made their initial landings in this cove. In 1745 the French defended the cove with only a small detachment but in 1757 they built and garrisoned extensive fieldworks here. The following year 1,000 French withstood an amphibious assault by 3,300 British until several boatloads of troops landed to the left of these defences and forced a French retreat. . . . This historical marker was erected by Parks Canada. It is Near Louisbourg in Cape Breton Regional Municipality Nova Scotia