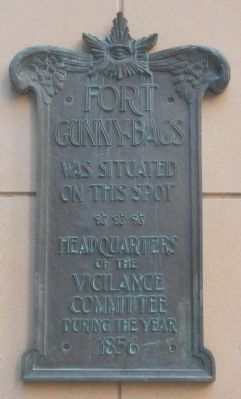 Fort Gunnybags
was situated
on this spot

Headquarters
of the
Vigilance
Committee
during the year
1856
(Marker Number 90.)

Marker series. This marker is included in the California Historical Landmark, and the Native Sons/Daughters of the Golden West marker series. 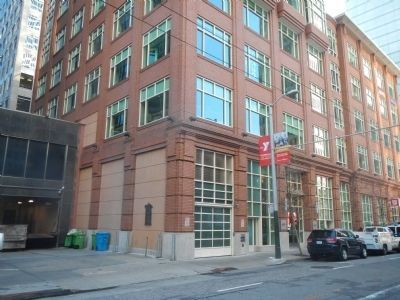 More about this marker. San Francisco –Saturday, June 1, interesting ceremonies will be held here under the auspices of Historic Landmarks Committee of the Grand Parlor, Native Sons of the Golden West. On the site of the former headquarters of the famous San Francisco Vigilance Committee of 1856, situated on Sacramento Street, between Davis and Front, will be replaced a bronze memorial tablet originally dedicated on March 21, 1903. At that time the walls of old Fort Gunnybags were standing. The fire of April 18, 1906 destroyed the building, and the bronze tablet was stolen. It was later recovered, and has since been stored in Native Sons’ Building.
Recently, a new building has been erected on the original site, and permission of the owners has been obtained to replace the tablet, which will now have far greater historical interest than when originally placed. The tablet is four feet by two, and was designed by Newton J. Tharpe. The all seeing eye, appearing upon the seal which was affixed to all documents issued by the Vigilance Committee, is a part of the design. The tablet bears the following inscription:
(See photo above)
Attached to the original tablet will be a new plate bearing these words:
“Tablet placed by the California Historic Landmarks League, March 21, 1903. The fire of April 18, 1906, destroyed the original building that occupied this site. The tablet disappeared, was recovered and, upon the erection of a new building, replaced June 1, 1918, by the Historic Landmarks Committee of the Native Sons of the Golden West.”
At the ceremonies held in 1903, there was brought from the California Pioneers’ building the original bell that summoned the vigilantes to headquarters when there was important work to perform during San Francisco’s early struggles for law and order. That old bell was destroyed with other valuable relics in the fire of 1906. All survivors of that famous committee will be invited to attend the ceremonies. --The Grizzly Bear, June 1918, page 37

It appears, from the 1960 re-re-dedication, that the marker has been moved again (the building may have even been demolished and rebuilt) and the lower plaque added in 1918 is now missing.

Also see . . .
1. The 1856 Committee of Vigilance - The Virtual Museum of the City of San Francisco. Next to 1848, when gold was discovered in California, 1856 was perhaps the most exciting year of the era by reason of the flood of crime into the city and brought about the organization of the famous Committee of Vigilance of that year, a form of direct action which attracted the attention of the world to a new style of summary justice, the result of extraordinary conditions in San Francisco. (Submitted on January 23, 2014, by Barry Swackhamer of Brentwood, California.) 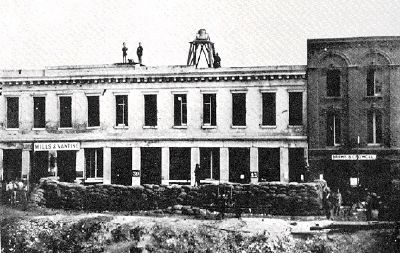 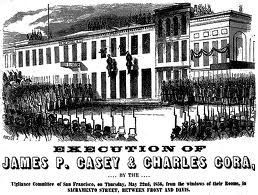