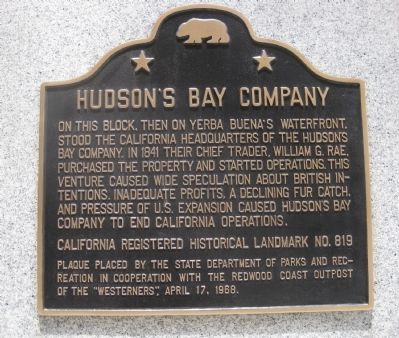 By Andrew Ruppenstein, July 18, 2010
1. Hudson's Bay Company Marker
Inscription.
Hudson's Bay Company. . . On this block, then on Yerba Buena's waterfront, stood the California headquarters of the Hudson's Bay Company. In 1841, their chief trader, William G. Rae, purchased the property and started operations. This venture caused wide speculation about British intentions. Inadequate profits, a declining fur catch, and pressure of U.S. expansion caused Hudson's Bay Company to end California operations. . . California Registered Historical Landmark No. 819 . . Plaque placed by the State Department of Parks and Recreation in cooperation with the Redwood Coast Outpost of the "Westerners", April 17, 1968. . This historical marker was erected by California State Department of Parks and Recreation; Redwood Coast Outpost of the Westerners. It is in San Francisco in San Francisco City and County California

Plaque placed by the State Department of Parks and Recreation in cooperation with the Redwood Coast Outpost of the "Westerners", April 17, 1968.

Topics and series. This historical marker is listed in this topic list: Industry & Commerce. In addition, it is included in the California Historical Landmarks series list. 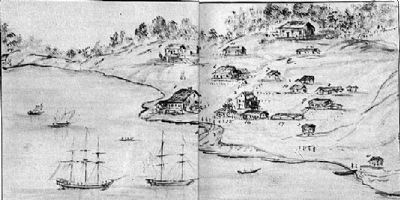 By Dr. Sandels, circa 1843
2. The Sea Town and Port of Yerba Buena in San Francisco Bay in California
This hand-drawn image of Yerba Buena in 1843, was part of Dr. Sandels' manuscript A Sojourn in San Francisco. The Hudson's Bay Store is located on the shoreline, immediately to the left of the crease in the image.
and County. Marker is at the intersection of Commercial Street and Montgomery Street, on the left when traveling west on Commercial Street. Touch for map. Marker is in this post office area: San Francisco CA 94111, United States of America. Touch for directions.

Also see . . .  The Hudson's Bay Company in Yerba Buena. SFgenealogy.com's reprinting of part of William Heath Davis' Seventy-five Years in San Francisco":
On the ending of the Hudson's Bay Company's venture, which is somewhat at variance with the reasons given on the marker:"...The business of the Hudson’s Bay Company’s post was quite successful up to January, 1845, when it was discovered that Rae was unfaithful to his wife, having succumbed to the fascinations of a California lady. Upon 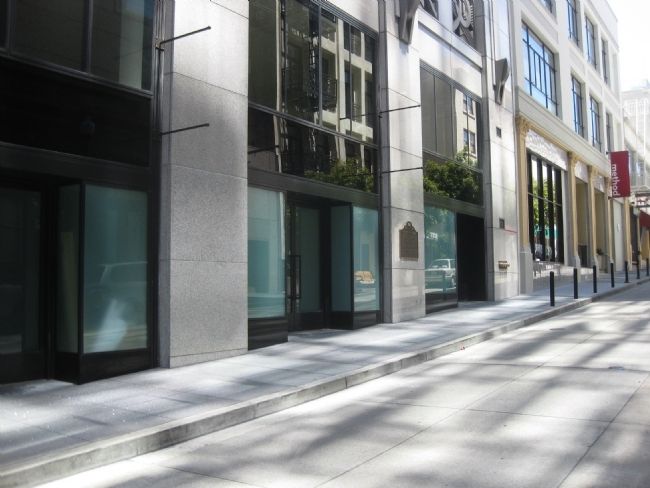 By Andrew Ruppenstein, July 18, 2010
3. Hudson's Bay Company Marker - wide view, looking west up Commercial Street
this becoming public, Rae, who was a sensitive man, was so overcome with mortification and disgrace that he shot himself. After his death the British vice-consul, James Alexander Forbes, took possession of the post, and was instructed by the managers of the general post on the Columbia River to close out the business of the company at Yerba Buena as soon as practicable. This was done in the course of a few months, and the land and house sold to Mellus & Howard for $5,000. They afterward opened a commercial establishment there, using the building as a store, and in the winter of 1849-50 this building was converted into the United States Hotel, which became a popular resort." (Submitted on March 30, 2011.)
Credits. This page was last revised on February 7, 2021. It was originally submitted on March 30, 2011, by Andrew Ruppenstein of Sacramento, California. This page has been viewed 691 times since then and 5 times this year. Last updated on December 12, 2019, by Craig Baker of Sylmar, California. Photos:   1, 2, 3. submitted on March 30, 2011, by Andrew Ruppenstein of Sacramento, California. • J. Makali Bruton was the editor who published this page.
Share This Page.