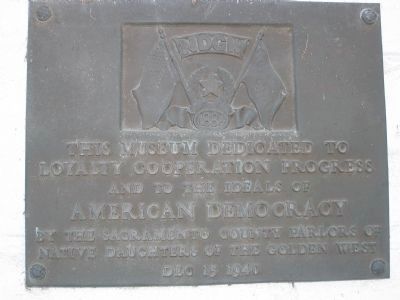 Photographed By Syd Whittle, January 15, 2006
1. California State Indian Museum Marker
Note the NDGW Logo Artwork on Marker
Inscription.
California State Indian Museum. .
This museum dedicated to.
LOYALTY – COOPERATION – PROGRESS.
And to the Ideals of.
AMERICAN DEMOCRACY. . This historical marker was erected in 1940 by The Sacramento County Parlors of Native Daughters of the Golden West. It is in Sacramento in Sacramento County California

Erected 1940 by The Sacramento County Parlors of Native Daughters of the Golden West. (Marker Number 991.)

Topics and series. This historical marker is listed in this topic list: Native Americans. In addition, it is included in the California Historical Landmarks, and the Native Sons/Daughters of the Golden West series lists.

Location. 38° 34.379′ N, 121° 28.305′ W. Marker is in Sacramento, California, in Sacramento County. Marker is on K Street. Marker and Museum are on the grounds of Sutter's Fort State Historic Park. Touch for map. Marker is at or near this postal address: 2618 K Street, Sacramento CA 95816, United States of America. Touch for directions.

Other nearby markers. At least 8 other markers are within walking distance of this marker. Sutter's Fort (about 300 feet away, measured in a direct line); The Coloma Road (about 600 feet away); New Helvetia Cemetery (approx. 0.4 miles away); The Dunn Mansion (approx. 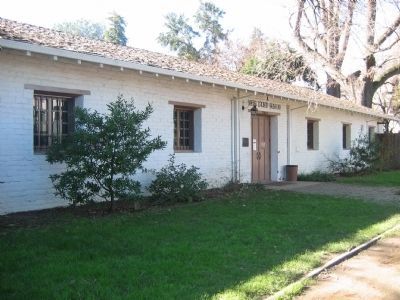 Photographed By Syd Whittle, January 15, 2006
2. California State Indian Museum Marker
Marker is mounted on the building to the left of the doors.(Note: These doors are facing the street but are the back side of the building. Entrance to the museum is on the opposite side of the building) 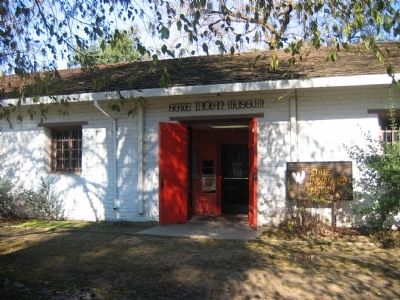 Photographed By Syd Whittle, January 15, 2006
3. Entrance to the State Indian Museum
the culture of the state’s earliest inhabitants. As many as 300,000 to 1,000,000 Native Americans lived in California before the arrival of the first Europeans. There were more than 150 distinct tribal groups. The artifacts in the museum include basketry, beadwork, clothing and exhibits about the ongoing traditions of various California Native American groups. There is a display about Ishi, the last of the Yahi Indians. Ishi managed to remain hidden from western civilization until 1911 when he was discovered in northern California. Native American structures have been built in an outdoor demonstration area. The museum has a number of special events throughout the year.
Source: KCRA3 – Where the News Comes First
— Submitted December 2, 2008, by Syd Whittle of Mesa, Arizona.
Credits. This page was last revised on December 12, 2019. It was originally submitted on December 2, 2008, by Syd Whittle of Mesa, Arizona. This page has been viewed 1,415 times since then and 51 times this year. Last updated on December 12, 2019, by Craig Baker of Sylmar, California. Photos:   1, 2, 3. submitted on December 2, 2008, by Syd Whittle of Mesa, Arizona. • J. Makali Bruton was the editor who published this page.
Share this page.