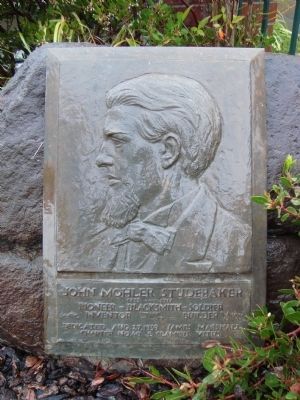 Topics and series. This historical marker is listed in these topic lists: Industry & Commerce • Settlements & Settlers • War, US Civil. In addition, it is included in the California Historical Landmarks, and the E Clampus Vitus series lists.

Location. 38° 43.765′ N, 120° 47.85′ W. Marker is in Placerville, California, in El Dorado County. Marker is on Main Street east of Bedford Avenue, on the right when traveling west. The marker is located on the western corner of a coffee retail restaurant outside seating and is obscured by bushes. Touch for map. Marker is at or near this postal address: 549 Main Street, Placerville CA 95667, United States of America. Touch for directions. 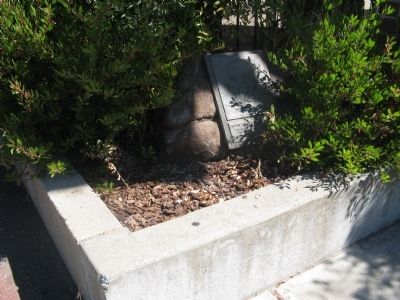 Regarding John Mohler Studebaker. This site was designated as California Registered Historical Landmark No. 142 on June 6, 1939.
Statement of Significance:
Studebaker's Shop (Site of) - This shop was built in the early 1850s. The front part housed a blacksmith shop operated by Ollis and Hinds, and John Mohler Studebaker rented a part of the rear. Here he had a bench and sort of woodworking shop where he repaired and worked on wagon wheels and the like. A little later he began to make wheelbarrows for the miners' use. He became engaged in the making of ammunition wagons for the Union Army - from that grew his extensive wagon and carriage business and, eventually, the automobile business. (Site 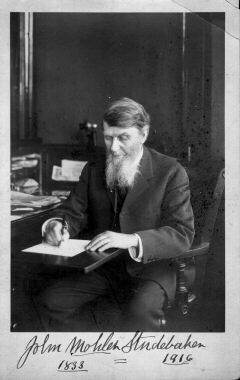 Additional comments.
1. The Studebaker Automobile
The Studebaker brothers were the only corporation that was successful in making the transition from horse drawn to gasoline powered vehicles. Studebaker eased their way into the automobile market after the turn of the century, introducing an electric car in 1902. Gasoline powered Studebakers came in 1904, produced by the Garford Company in Ohio, marketed under the name Studebaker-Garford. At age 84, John Mohler Studebaker was the only brother that lived to see the production of the automobile (born 1833 and died 1917).
— Submitted September 10, 2010.
Credits. This page was last revised on December 12, 2019. It was originally submitted on September 10, 2010, by Syd Whittle of Mesa, Arizona. This page has been viewed 1,437 times since then and 57 times this year. Last updated on December 12, 2019, by Craig Baker of Sylmar, California. Photos:   1. submitted on May 16, 2011, by Barry Swackhamer of Brentwood, California.   2, 3. submitted on September 10, 2010, by Syd Whittle of Mesa, Arizona. • J. Makali Bruton was the editor who published this page.
Share This Page.