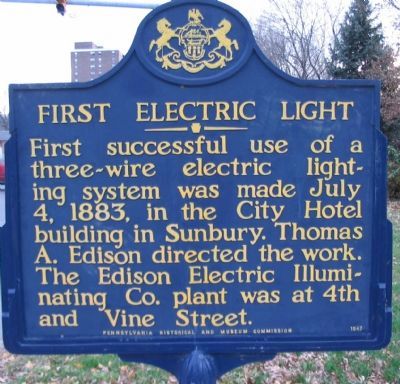 By Craig Swain, November 28, 2008
1. First Electric Light Marker
Inscription.
First Electric Light. . First successful use of a three-wire electric lighting system was made July 4, 1883, in the City Hotel building in Sunbury. Thomas A. Edison directed the work. The Edison Electric Illuminating Co. plant was at 4th and Vine Street. . This historical marker was erected in 1947 by Pennsylvania Historical and Museum Commission. It is in Sunbury in Northumberland County Pennsylvania

First successful use of a three-wire electric lighting system was made July 4, 1883, in the City Hotel building in Sunbury. Thomas A. Edison directed the work. The Edison Electric Illuminating Co. plant was at 4th and Vine Street.

Topics and series. This historical marker is listed in this topic list: Industry & Commerce. In addition, it is included in the Pennsylvania Historical and Museum Commission series list. A significant historical month for this entry is July 1933.

Location. 40° 51.784′ N, 76° 47.804′ W. Marker is in Sunbury, Pennsylvania, in Northumberland County. Marker is at the intersection of Front Street (State Highway 147) and Market Street, on the right when traveling south on Front Street. Touch for map. Marker is in this post office area: Sunbury PA 17801, United States of America. Touch for directions.

Other nearby markers. At least 8 other markers are within walking distance of this marker. William Maclay (about 500 feet away, measured in a direct line); Northumberland County (about 700 feet away); Sunbury War Memorials (approx. 0.2 miles away); Lorenzo Da Ponte (1749-1838) (approx. 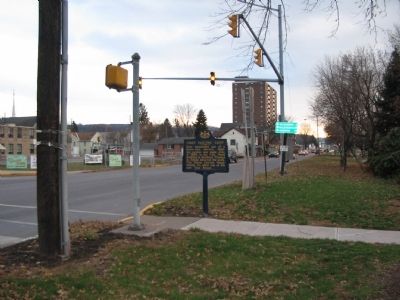 2. First Electric Light - Behind the Marker. ExplorePAHistory.com (Submitted on July 20, 2011, by Mike Wintermantel of Pittsburgh, Pennsylvania.) 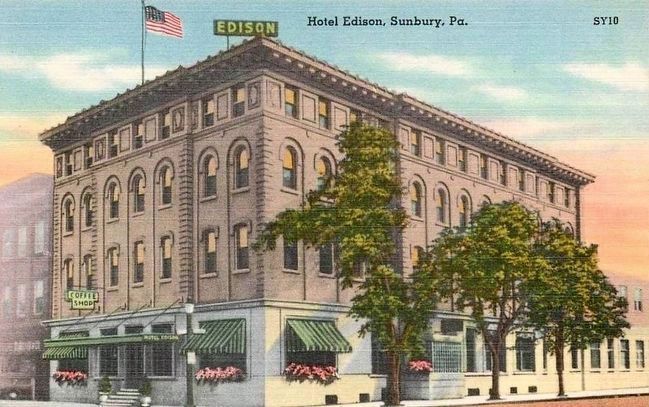 Postcard by the Mebane Greeting Card Company, circa 1935
3. Hotel Edison, Sunbury, Pa.
In 1883 Thomas Edison and his crew used Sunbury's City Hotel as their base during installation of their experimental three-wire electrical system in the town. On the night of July 4th, Edison switched on the current to a 100-candle power light over the City Hotel entrance, to the cheers of residents and marches played by a local brass band. Sunbury's City Hotel, which changed its name to the Hotel Edison soon after the lighting ceremony, remains in operation today. -- ExplorePAHistory.com
Credits. This page was last revised on June 16, 2016. It was originally submitted on December 10, 2008, by Craig Swain of Leesburg, Virginia. This page has been viewed 987 times since then and 13 times this year. Photos:   1, 2. submitted on December 10, 2008, by Craig Swain of Leesburg, Virginia.   3. submitted on October 20, 2015.
Share This Page.