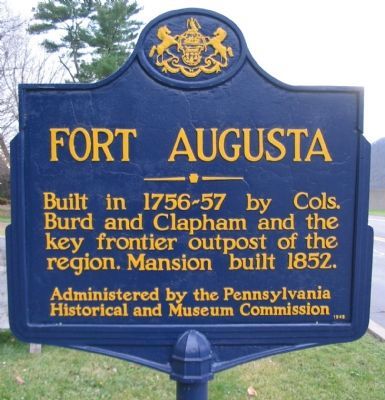 Photographed By Craig Swain, November 28, 2008
1. Fort Augusta Marker
Inscription.
Fort Augusta. . Built in 1756-57 by Cols. Burd and Clapham and the key frontier outpost of the region. Mansion built 1852. . This historical marker was erected in 1948 by Pennsylvania Historical and Museum Commission. It is in Sunbury in Northumberland County Pennsylvania

Topics and series. This historical marker is listed in these topic lists: Forts and Castles • War, French and Indian. In addition, it is included in the Pennsylvania Historical and Museum Commission series list. A significant historical year for this entry is 1852.

Location. 40° 52.565′ N, 76° 47.512′ W. Marker is in Sunbury, Pennsylvania, in Northumberland County. Marker is on North Front Street (State Highway 147), on the right when traveling north. Located in front of the Hunter House Museum, the site of Fort Augusta. Touch for map. Marker is at or near this postal address: 1150 North Front Street, Sunbury PA 17801, United States of America. Touch for directions. 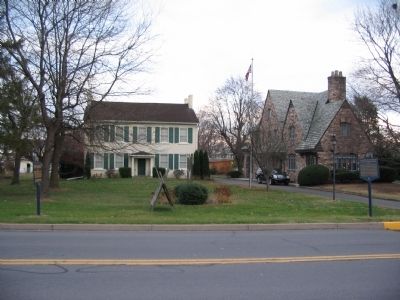 Click or scan to see
this page online
measured in a direct line); Shikellamy's Profile (about 700 feet away); The Bloody Spring (approx. 0.6 miles away); Pennsylvania Canal (approx. 0.7 miles away); William Maclay (approx. 0.8 miles away). Touch for a list and map of all markers in Sunbury.

Also see . . .  The Hunter House Museum. The mansion built in the site of the fort now serves as the County Historical Society office and museum. (Submitted on December 11, 2008, by Craig Swain of Leesburg, Virginia.) 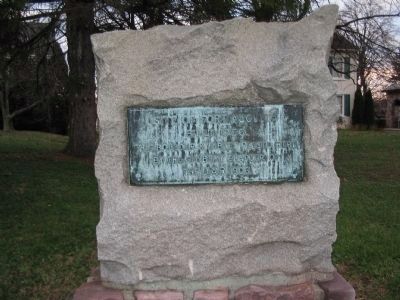