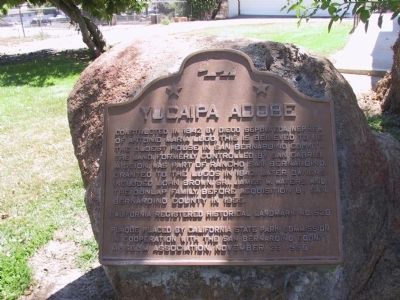 Constructed in 1842 by Diego Sepulveda, nephew of Antonio Maria Lugo, this is believed to be the oldest house in San Bernardino County. The land, formerly controlled by San Gabriel Mission, was part of Rancho San Bernardino, granted to the Lugos in 1842. Later owners included John Brown, Sr., James W. Waters, and the Dunlap Family before acquisition by San Bernardino County in 1955.

Topics and series. This historical marker is listed in these topic lists: Hispanic Americans • Notable Buildings • Settlements & Settlers. In addition, it is included in the California Historical Landmarks series list. A significant historical year for this entry is 1842.

Location. 34° 1.345′ N, 117° 6.12′ W. Marker is in Yucaipa, California, in San Bernardino County. Marker is at the intersection of Kentucky Street and Dunlap Boulevard, on the right when traveling east on Kentucky Street. Touch for map. Marker 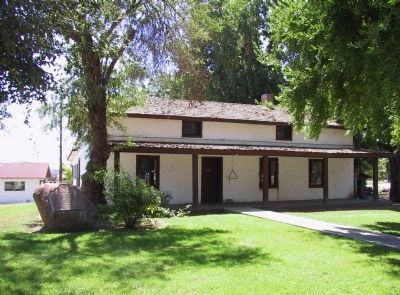 By Michael Kindig, August 30, 2005
2. Yucaipa Adobe Marker and Adobe
Marker is mounted on a large granite boulder at the foot of the tree seen on the left.

Click or scan to see
this page online
is at or near this postal address: 32183 Kentucky Street, Yucaipa CA 92399, United States of America. Touch for directions.

Regarding Yucaipa Adobe. It is now believed that Diego Sepulveda’s adobe was located a few hundred yards away, near 16th and Dunlap Boulevard, and that James Waters, noted hunter, trapper, and mountaineer, built the Yucaipa Adobe in 1858. John Dunlap purchased the Yucaipa ranch in 1869. The Dunlap Family maintained ties to the adobe until the 1950s.

Open on the third Sunday of March, June, September, and December, from 1 to 4 p.m. for guided tours. Admission. 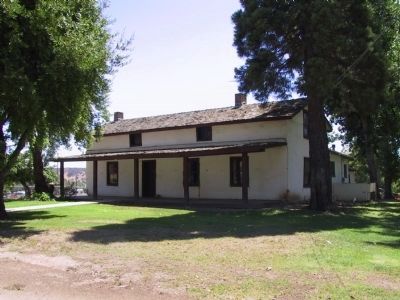