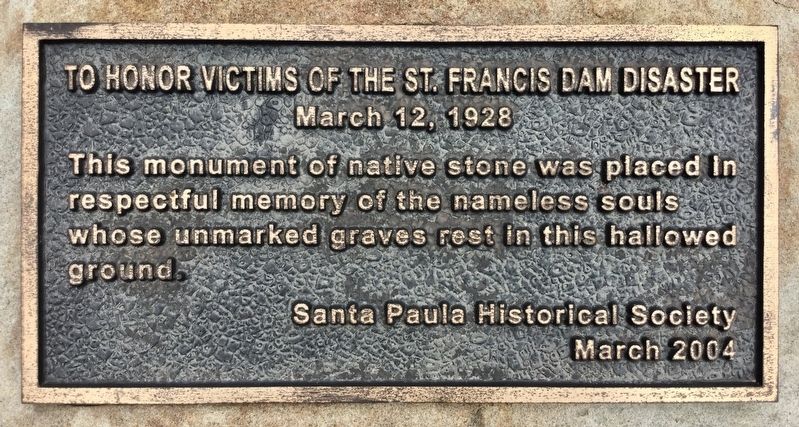 To honor victims of the St. Francis Dam Disaster, March 12, 1928. This monument of native stone was placed in respectful memory of the nameless souls whose unmarked graves rest in this hallowed ground.

Location. 34° 21.255′ N, 119° 4.79′ W. Marker is in Santa Paula, California, in Ventura County. Marker can be reached from Cemetery Road north of West Santa Paula Street. Near the back of the cemetery. Touch for map. Marker is at or near this postal address: 380 Cemetery Road, Santa Paula CA 93060, United States of America. Touch for directions. 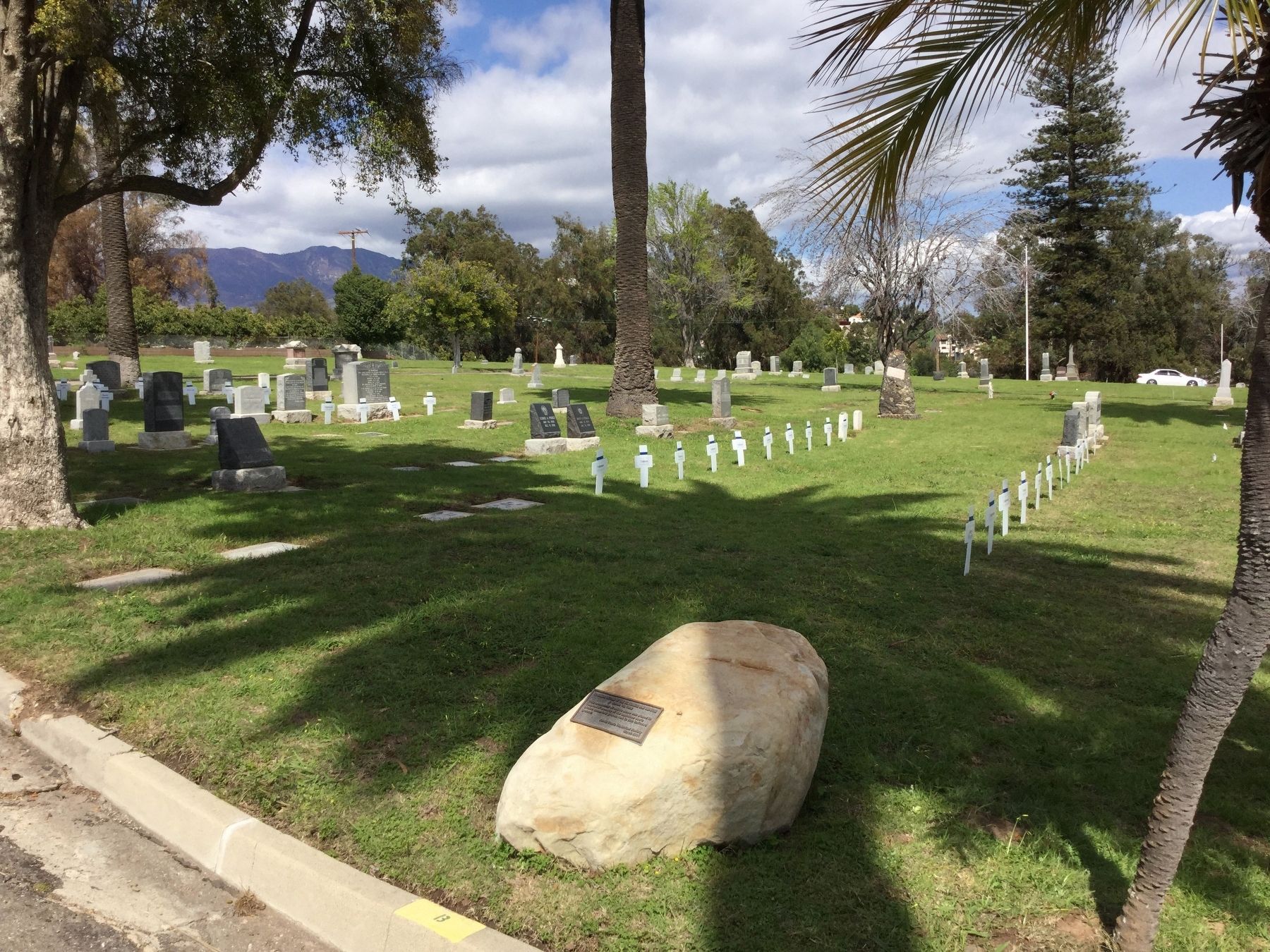 Regarding St. Francis Dam Disaster. The St. Francis Dam was constructed from 1924 to 1926, with a 12.5-billion-gallon capacity. At 11:57 pm on March 12, 1928, the dam failed, sending a 180-foot-high wall of water down San Francisquito Canyon to the Santa Clara River, reaching the Pacific Ocean near Ventura 5½ hours later. Over 400 people were killed. It was the second-worst disaster in California history, after the great San Francisco earthquake and fire of 1906, in terms of lives lost, and America's worst civil engineering failure of the 20th Century.

Related markers. Click here for a list of markers that are related to this marker. — St. Francis Dam Disaster sites. 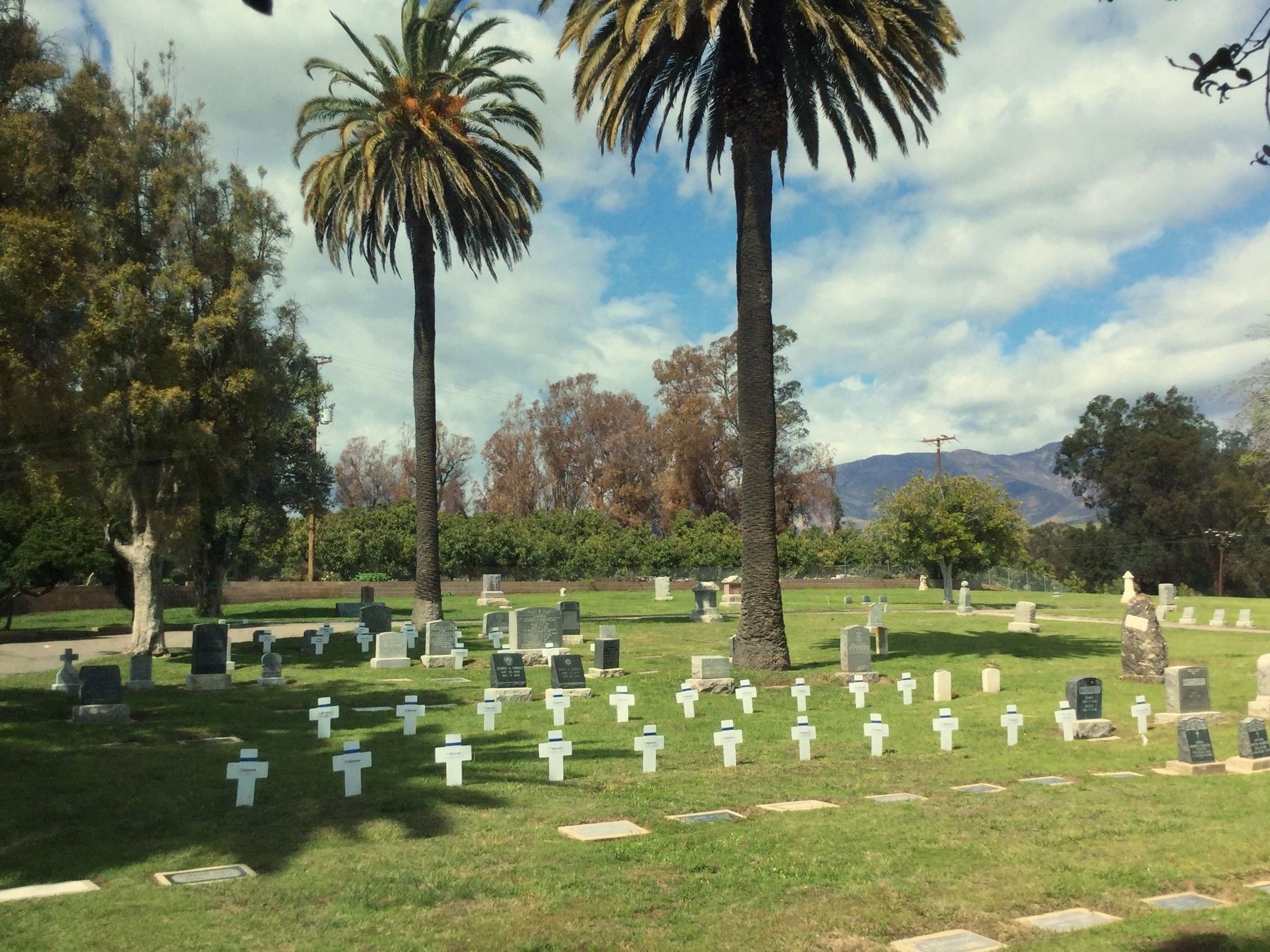 By Craig Baker, March 25, 2018
3. St. Francis Dam Disaster Victims
On the 90th anniversary of the flood, victims’ gravesites are indicated with temporary crosses. Many graves are not marked because the victims were not identified. A total of 57 flood victims are buried in this cemetery. There were only 16 deaths in Santa Paula. The others were from upstream.
More. Search the internet for St. Francis Dam Disaster.