In Memory of the First Defenders and Nicholas Biddle 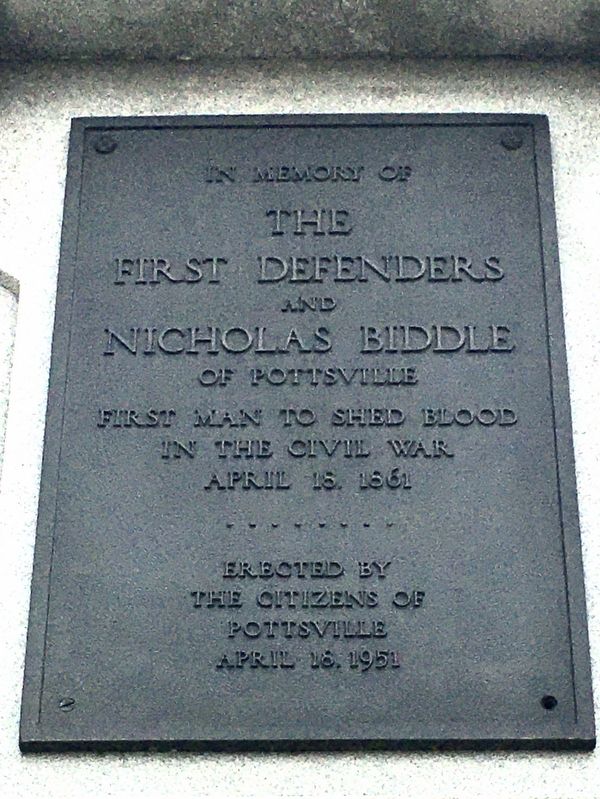 Photographed By Frederick Bothwell, December 2019
1. Marker is mounted on Southwest face of monument plinth
Inscription.
In Memory of the First Defenders and Nicholas Biddle. . First man to shed blood in the Civil War April 18,1861 . This historical marker was erected in 1951 by Erected by the Citizens of Pottsville. It is in Pottsville in Schuylkill County Pennsylvania

Erected 1951 by Erected by the Citizens of Pottsville.

Topics. This memorial is listed in these topic lists: Patriots & Patriotism • War, US Civil. A significant historical date for this entry is April 18, 1861.

Location. 40° 41.04′ N, 76° 11.934′ W. Marker is in Pottsville, Pennsylvania, in Schuylkill County. Memorial is on West Market Street (Pennsylvania Route 209) 0 miles west of North 5th Street, in the median. The marker is affixed to the Southwest face of a monument in the median strip of West Market Street. Touch for map. Marker is in this post office area: Pottsville PA 17901, United States of America. Touch for directions.

Other nearby markers. At least 8 other markers are within walking distance of this marker. Spanish War Veterans (within shouting distance of this marker); Yuengling -America's Oldest Brewery (about 500 feet away, measured in a direct line); John O'Hara (about 600 feet away); John K. "Jack" Schneider (about 600 feet away); Joseph L. Warne, M. D. (approx. 0.2 miles away); Mahantongo and South Second Streets (approx. 0.2 miles away); 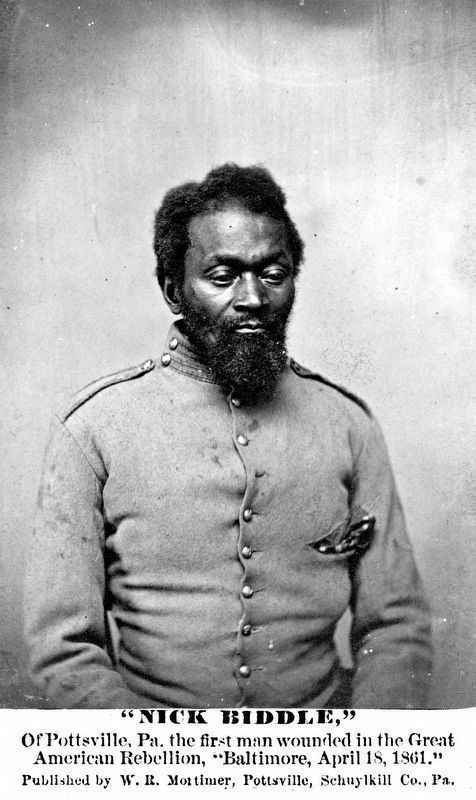 More about this marker. The monument has four bronze military figures around its plinth and a column surmounted by a draped female figure with a sheathed sword in the left hand, holding an olive wreath aloft in the right hand.

Regarding In Memory of the First Defenders and Nicholas Biddle. According to other sources, the first U.S. casualty at the outbreak of hostilities was Daniel Hough, an Irish immigrant soldier who died at Fort Sumpter on April 14, 1861, four days before Nicholas Biddle, who was injured during a civil disturbance at a train station in Baltimore several days later. 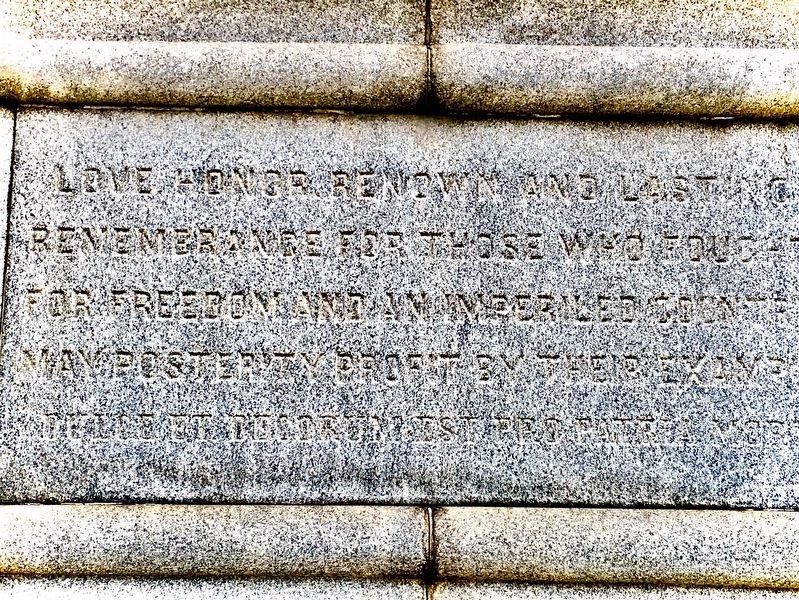 Photographed By Frederick Bothwell, December 2019
3. Inscription Below First Defenders Marker
"Love, honor, renown, and lasting remembrance for those who fought for freedom and an imperiled country. May posterity profit by their example. DULCE ET DECORUM EST PRO PATRIA MORI" ("It is sweet and proper to die for one's country" is a line from the Odes of the Roman poet Horace.) 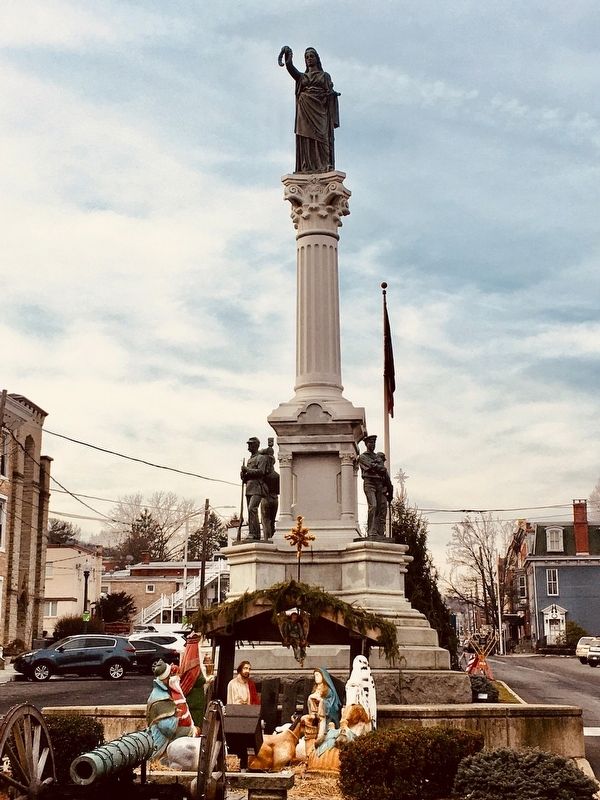 Photographed By Frederick Bothwell, December 2019
4. Pottsville Civil War Monument
The monument and the figure atop the column face northeast. The Defenders/Biddle marker is mounted on the southwest face of the plinth. The four uniformed figures atop the plinth represent an Infantry soldier with a rifle, a Cavalryman with a saber, an Artilleryman with a ramrod, and a sailor with a sailor hat. 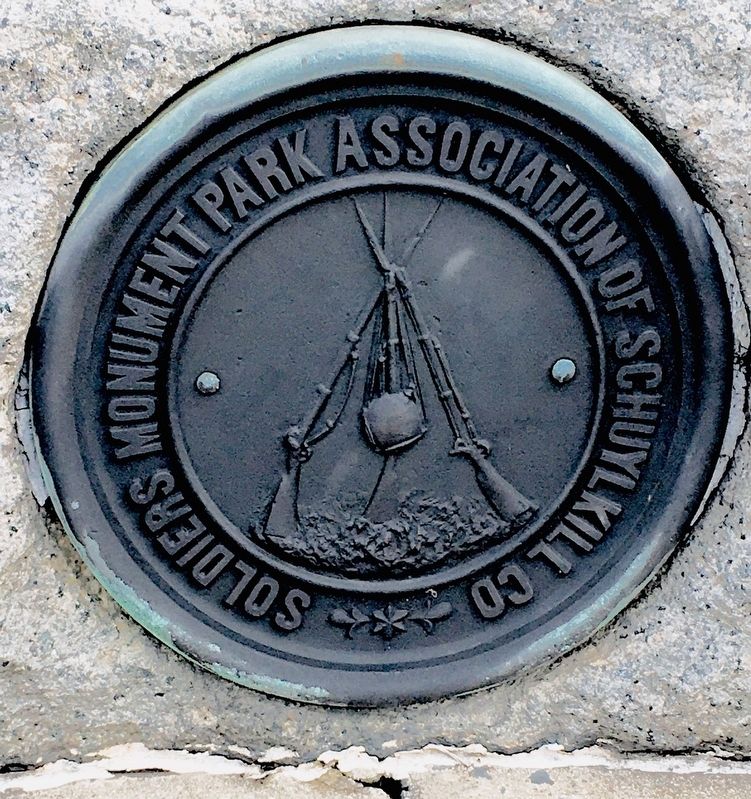 Photographed By Frederick Bothwell, December 2019
5. Medallion On Base Of Monument
This medallion is mounted on the northeast face of the base. 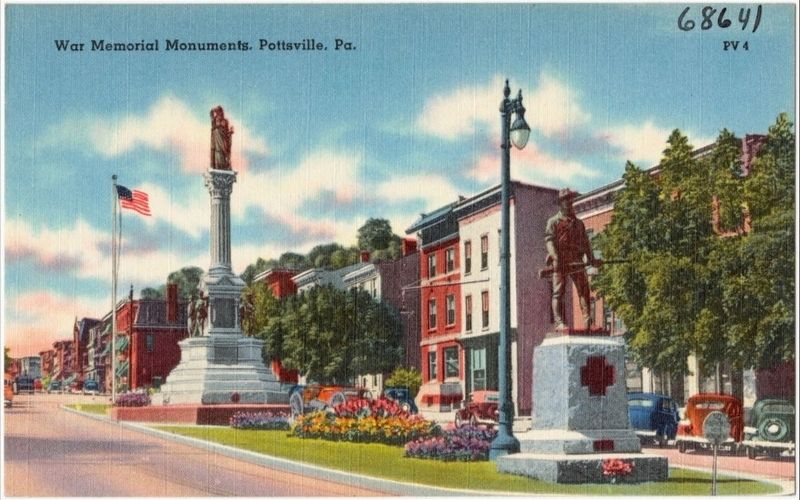