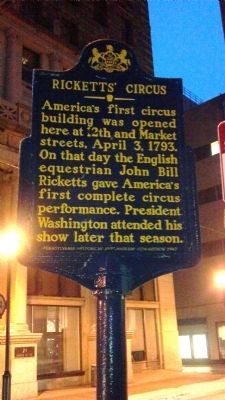 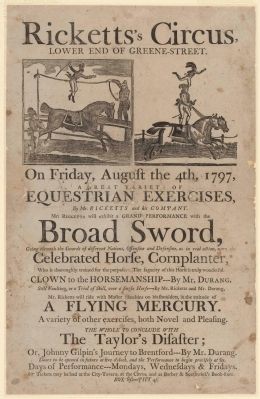 Additional comments.
1. First Circus in America
In his short American career John Bill Ricketts established the first American Circus. He started out in in Philadelphia, he became a friend of President George Washington, and took his Circus on the road, throughout the East Coast of America. In doing so through horse acts and “daring do”, he gave a new continent a new type of theatre and showmanship that exists to this day. Simply stated he gave America a fun filled show called “the Circus”. He had established daring equestrian acts as the highlight of “the Circus” and throughout the beginning of the 19th century other circuses formed and followed his model. Ricketts contributions to his art blazed the trail for others to follow after him. Such names as Bailey, Cole, Ringling, and of corse P.T. Barnum, owe a debt of gratitude to the man that came before them making such an impact on our culture as to make their shows sought after.
— Submitted January 22, 2012, by Keith S Smith of West Chester, Pennsylvania.