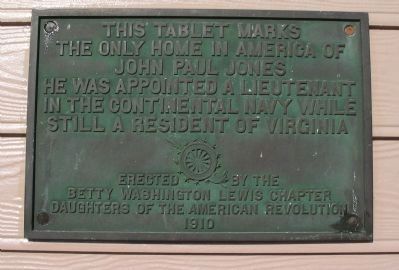 Photographed By Craig Swain, December 13, 2008
1. John Paul Jones House Marker
Inscription.
John Paul Jones House. . This tablet marks the only home in America of John Paul Jones. He was appointed a lieutenant in the Continental Navy while still a resident of Virginia. . This historical marker was erected in 1911 by Daughters of the American Revolution, Betty Washington Lewis Chapter. It is in Fredericksburg Virginia

This tablet marks the only home in America of John Paul Jones. He was appointed a lieutenant in the Continental Navy while still a resident of Virginia.

Topics and series. This historical marker is listed in these topic lists: War, US Revolutionary • Waterways & Vessels. In addition, it is included in the Daughters of the American Revolution (DAR) series list. 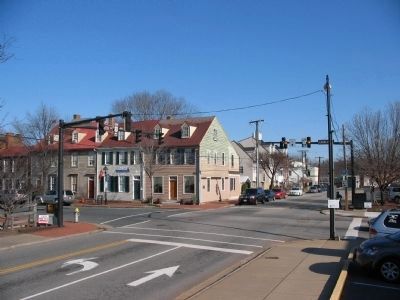 Photographed By Craig Swain, December 13, 2008
2. Location of Tablet
The tablet is mounted on the side of the house at the intersection.

Also see . . .  Newspaper article announcing the marker's dedication. Note, while it states 1910 on the tablet, it was not installed until November 25, 1911. The article reads:

FREDERICKSBURG, Va., November 25 - "The only home in America of John Paul Jones" was marked appropriately today when a bronze tablet was unveiled on the house here where the famous American naval hero lived when in 1775 he was appointed a lieutenant in the continental navy. The tablet was erected by the Betty Washington Lewis Chaptet of the Daughters of the American Revolution and unveiled by little Miss Josephine Carter Barney, a descendant of a long line of distinguished naval heroes.

Judge John T. Goolrick delivered the introductory address. He stated that John Paul Jones had been a citizen of Virginia and a resident of Fredericksburg during the entire period of his abode in this 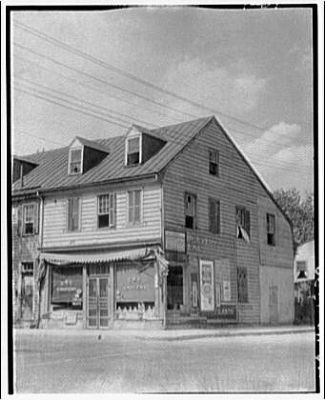 3. The John Paul Jones House ca. 1910
(Library of Congress Prints and Photographs Division Washington, D.C. 20540 USA, Horydczak Collection, LC-H813-1239.)
country. William Paul, the only brother of the commodore, he said, kept a store and tailor shop in the house upon which the tablet was erected. John Paul Jones came here in 1760, remaining about four years, and returned to Scotland. His brother, William Paul, died in 1773 and was buried in the graveyard of St. George's Episcopal Church in this city. John Paul came here again in 1775, and he was living in this house when he was appointed lieutenant in the continental navy. He added Jones to his name for the first time when he entered the navy.

Ben P. Willis of the Fredericksburg oar made the dedicatory address. He said, in part:

“While American patriots were busy fighting the British on land, others, equally brave, were fighting them at sea. As soon as the war began Congress gave seamen letters of marque, which were permissions to attack and seize any British vessel they met. The bravest and best known of all the American seamen of this time was John Paul Jones. 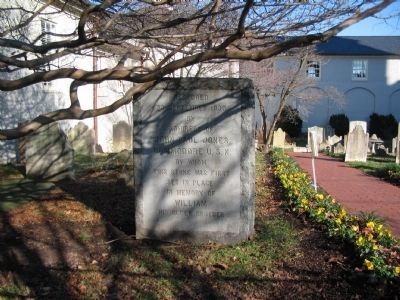 Photographed By Craig Swain, December 13, 2008
4. William Paul Headstone
In the nearby St. George's Episcopal Church is this memorial to John Paul Jones' brother.
battle with the Serapis. It was after sunset on the 23d of September, 1779, and a full moon had arisen, when the Bon Homme Richard came within hail of the Serapis, a British man-of-war, off Flamborough Head, Yorkshire.

"Capt. Pearson of the latter frigate spoke the Richard twice. For answer Jones opened fire, and here was waged one of the fiercest naval battles ever fought. Although Jones' ship was afire from the very beginning, his guns all disabled, the vessel shot away between decks and slowly sinking, he boldly lashed it fast to the Serapis. By this time the smoke was so thick that the British captain could not see whether the American flag had been hauled down, and shouted, 'Have you struck your colors,' but Jones coolly answered, 'I have not yet begun to fight.'

"Such was Jones' pluck that the British commander was forced to yield, but as he gave up his sword he haughtily said: 'It is with great reluctance that I surrender mv sword to a man who fights with a halter around his neck.' Jones returned the weapon, politely saying: 'Capt Pearson, you have fought like a hero, and 1 have no doubt that your sovereign will reward you for it in the most ample manner.’

"The news of Paul Jones' victory caused great rejoicings both in America and in France, and upon his return to the latter country he was invited to court with r Franklin. Louis XVI heard Jones' account of the fight, presented him a sword and informed him that his enemy, Capt. Pearson, had just been knighted by George III for his intrepid action and had received a new ship. Paul Jones gayly answered: 'Well, he deserved the honor, and if I meet him in his new ship I'll make a lord of him.'

"Upon his return to America, at the close of the war. Congress gave him a vote of thanks, and he would have been further honored, but, being offered an important command by the Empress of Russia against the Turks. In the Black sea, he accepted with the stipulation 'that he was never to renounce the title of an American citizen.' "