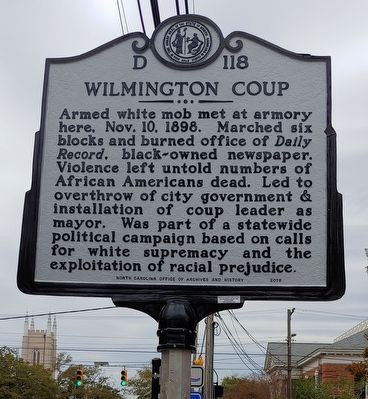 By Michael C. Wilcox, January 2, 2020
1. Wilmington Coup Marker
Inscription.
Wilmington Coup. .
Armed white mob met at armory here, Nov. 10, 1898. Marched six blocks and burned office of Daily Record, black-owned newspaper. Violence left untold numbers of African Americans dead. Led to overthrow of city government & installation of coup leader as mayor. Was part of a statewide political campaign based on calls for white supremacy and the exploitation of racial prejudice.. . This historical marker was erected in 2019 by NC Office of Archives and History. It is in Wilmington in New Hanover County North Carolina

Topics. This historical marker is listed in these topic lists: African Americans • Civil Rights. A significant historical year for this entry is 1898. 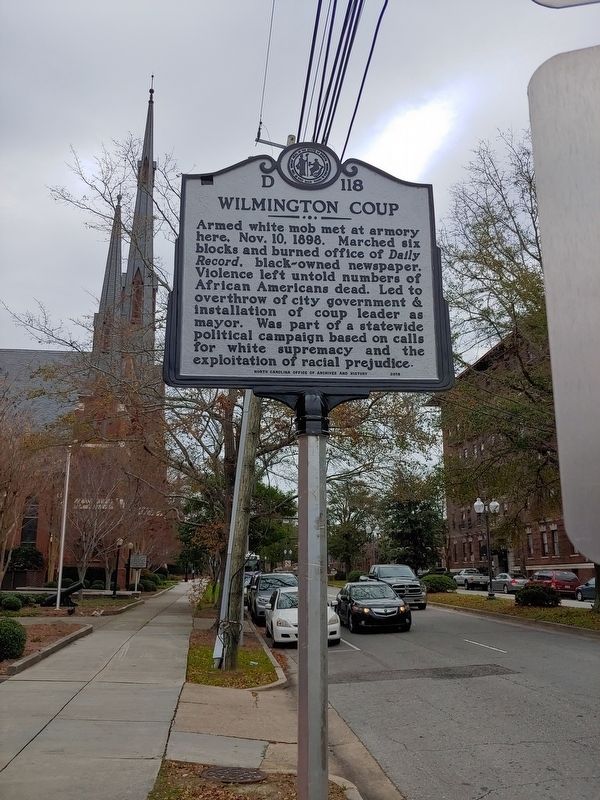 Regarding Wilmington Coup. The following is an essay from the official NC Markers page (link provided below):

What traditionally has been termed a "race riot" has also been called a massacre, rebellion, revolt, race war, and coup d'etat. The events of November 10, 1898, in Wilmington constitute a landmark in North Carolina history. Over a century later some details are still in question. The number of casualties, for example, range from the coroner's fourteen to unconfirmed reports of scores or even hundreds of deaths. The 2006 official state report settled upon "as many as sixty." All of the reported victims were black. The event marked the climax of the white supremacy campaign of 1898 and a turning point in the state’s history. Restriction 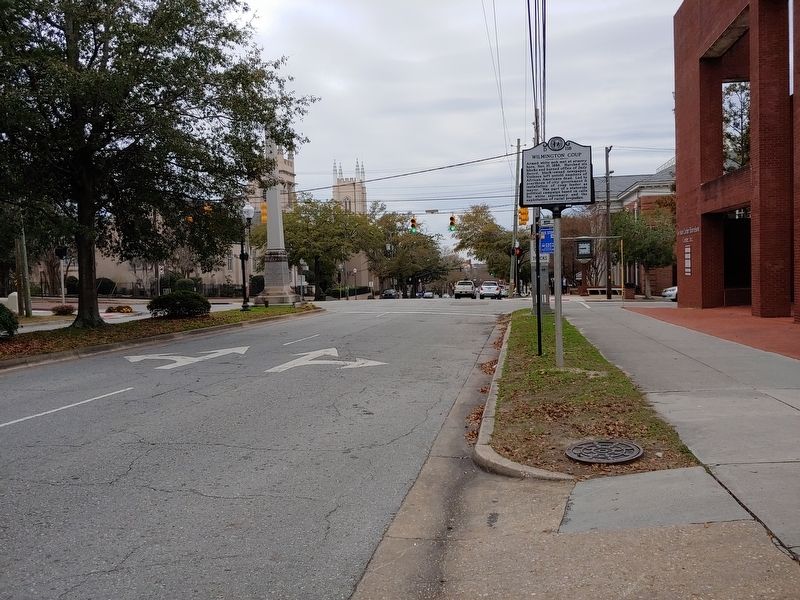 Alfred Moore Waddell, a former Confederate officer and U.S. Congressman, in the days preceding the election of 1898 called for the removal of the Republicans and Populists then in power in Wilmington and proposed in a speech at Thalian Hall that the white citizens, if necessary, "choke the Cape Fear with carcasses." What had particularly incensed Waddell and others was the publication in August of an editorial in the Daily Record, a local black-owned newspaper. Alex Manly (1866-1944), the editor, charged that "poor white men are careless in the matter of protecting their women" and that "our experience among poor white people in the country teaches us that women of that race are not any more particular in the matter of clandestine meetings with colored men than the white men with colored women." The sexually charged editorial, reprinted across the state, provided Democrats with an issue to inflame racial tensions as Election Day approached. Yet the day passed without notable incident.

At 8:00 A.M. two days later about 500 white men assembled at the armory of the Wilmington Light Infantry and, after several others declined, Waddell took on the task of leading them to the Daily Record office in Free Love Hall four blocks south of Seventh Street between Nun and Church Streets. The crowd swelled to perhaps 2,000 as they moved across town. Manly, in the meantime, had fled the city, as had numerous other blacks in expectation of violence. The mob invaded the building, a fire broke out, and the top floor of the building was consumed. The crowd posed for photographs in front of the burned-out frame. Within hours violence had spread to other parts of the city.

Silas P. Wright, the white Republican mayor, resigned under pressure as did members of the city council and other officers, both black and white. Waddell then took office as mayor. The revolt had the support of many of the most powerful men in the city. George Rountree, an attorney and adviser to the coup leaders, in 1899 served as chairman of the state legislative committee of constitutional reform that drafted and sponsored the so-called "Grandfather Clause," providing that male citizens could vote if they could read and write or if their grandfather voted, thereby denying most blacks the franchise.

The Wilmington "race riot" of 1898 has been widely written about by both historians and novelists. Charles W. Chesnutt's The Marrow of Tradition (1901), Thomas Dixon's The Leopard's Spots (1902), and Philip Gerard's Cape Fear Rising (1994) used the event as a backdrop. A symposium held at the University of North Carolina at Wilmington in November 1998 commemorated the centennial and sparked renewed interest in the subject. In 2000 the General Assembly authorized the creation of the 1898 Wilmington Race Riot Commission to study the event and its impact.


Related marker. Click here for another marker that is related to this marker. Alex Manly