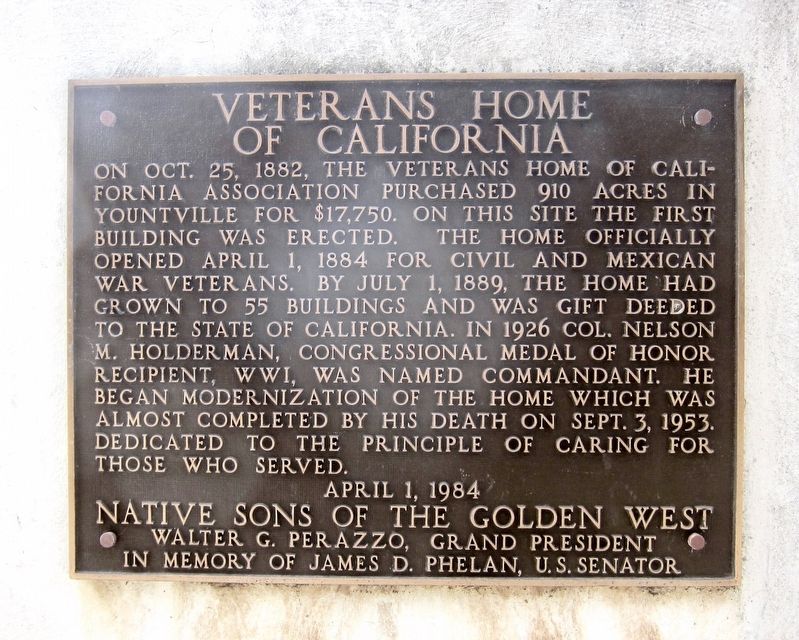 On Oct. 25, 1882, the Veterans Home of California Association purchased 910 Acres in Yountville for $17,750. On this site the first building was erected. Opened April 1, 1884 for Civil and Mexican War veterans. By July 1, 1889, the Home had grown to 55 buildings and was gift deeded to the State of California. In 1926 Col. Nelson M. Holderman, Congressional Medal Of Honor Recipient, WWI, was named Commandant. He began modernization of the Home which was almost completed by his death on Sept. 3, 1953. Dedicated to the principle of caring for those who served.


Erected 1984 by Native Sons Of The Golden West.

Topics and series. This historical marker is listed in these topic lists: Charity & Public Work • War, World I. In addition, it is included in the Medal of Honor Recipients, and the Native Sons/Daughters of the Golden West series lists. A significant historical date for this entry is October 25, 1882. 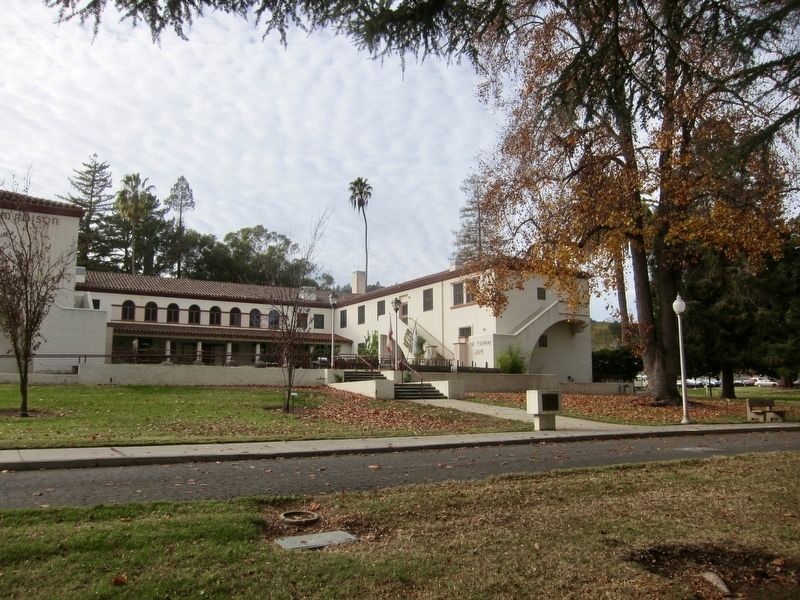 By Andrew Ruppenstein, December 5, 2015
2. Veterans Home of California Marker - wide view
The marker is visible here, mounted to the low cement monument close to the street.

Also see . . .  Veterans Home of California Yountville (Wikipedia). "The Veterans Home of California is located in Yountville, California, and was founded in 1884. The facility is the largest of its kind in the United States and has a population of almost 800 aged and disabled veterans of World War II, Korean War, Vietnam War, Gulf War, War in Afghanistan, and Operation Enduring Freedom/Operation Iraqi Freedom. Several levels of care are offered to residents, including domiciliary services, residential care for the elderly, intermediate nursing care, skilled nursing care, adult day health care, and outpatient clinic." (Submitted on January 9, 2020.)
Credits. This page was last revised on January 9, 2020. It was originally submitted on January 8, 2020, by Andrew Ruppenstein of Sacramento, California. This page has been viewed 82 times since then and 6 times this year. Photos:   1, 2. submitted on January 9, 2020, by Andrew Ruppenstein of Sacramento, California.
Share This Page.