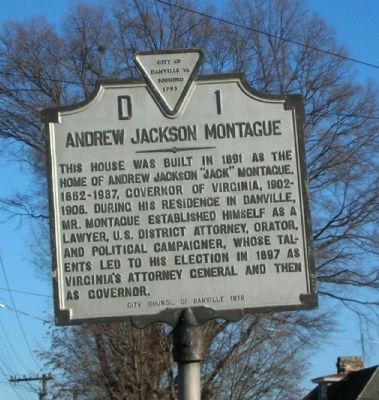 By Amy Wilson, December 13, 2008
1. Andrew Jackson Montague Marker
Inscription.
Andrew Jackson Montague. . This house was built in 1891 as the home of Andrew Jackson “Jack” Montague, 1862-1937, Governor of Virginia, 1902-1906. During his residence in Danville, Mr. Montague established himself as a lawyer, U.S. District Attorney, orator, and political campaigner, whose talents led to his election in 1897 as Virginia’s Attorney General and then as governor. . This historical marker was erected in 1978 by City Council of Danville. It is in Danville Virginia

This house was built in 1891 as the home of Andrew Jackson “Jack” Montague, 1862-1937, Governor of Virginia, 1902-1906. During his residence in Danville, Mr. Montague established himself as a lawyer, U.S. District Attorney, orator, and political campaigner, whose talents led to his election in 1897 as Virginia’s Attorney General and then as governor.

Topics and series. This historical marker is listed in this topic list: Government & Politics. In addition, it is included in the Virginia Department of Historic Resources series list. A significant historical year for this entry is 1891.

Other nearby markers. At least 8 other markers are within walking distance of this marker. The A.J. Montague House (a few steps from this marker); Veterans Memorial (within shouting 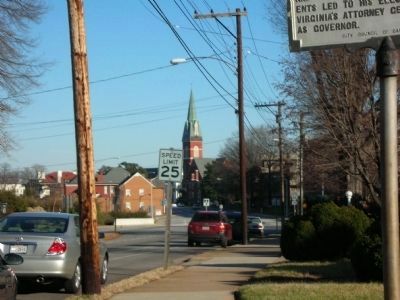 More about this marker. This marker is not an official Commonwealth of Virginia historical marker, despite it’s shape, and is not on the list published by the Department of Historic Resources online. DHR's D-1 marker is in Dayton.

Regarding Andrew Jackson Montague. The Governor Monteque House is a Queen Anne frame mansion having an asymmetrical front ornamented with a variety of wooden details. These include the shingled gables, sawn and turned gable ornaments, bracketed cornice and the rich carving in the porch pediment. With its complex geometry, the house is an important visual element on a conspicuous corner of West Main Street. The Monteque house also marks the western most boundary of the Old West End Historic District.

The meteoric rise to power of its first owner, Andrew Jackson Montague signified its place in history, complete with an historical highway marker to prove the point. Following the War Between the States, Danville was a tobacco and textile boom town, 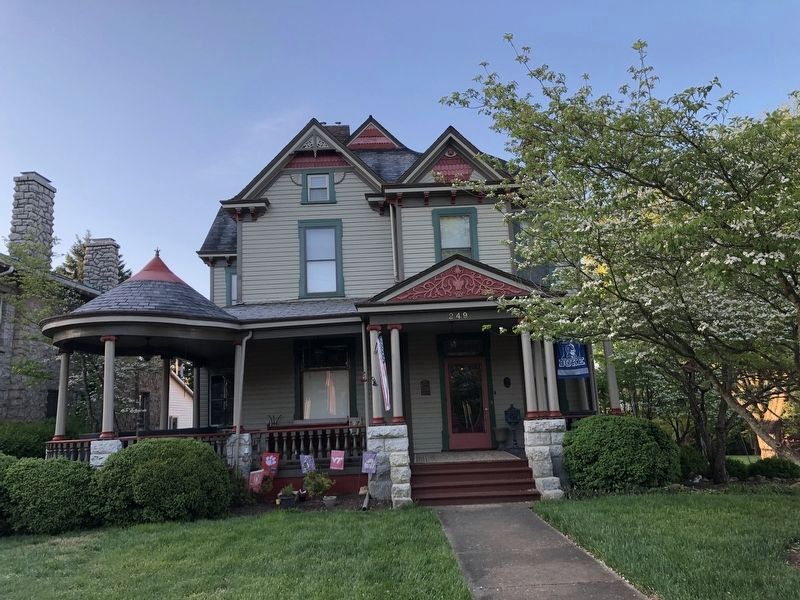 By Devry Becker Jones, April 23, 2021
3. The Andrew Jackson Montague House
mecca for such men as the Dibrell Brothers who relocated here from Richmond; and the Schoolfield brothers who moved here from Horsepasture in Henry County, VA. Respectively, they founded the tobaco brokerage house Dibrell Brothers, Inc. and Dan River, Inc., a world leader in textiles. Similarly, rather than return to his native King and Queen County (VA) following law school, young Jack Mongague chose Danville to launch his legal career in 1885. While he and his family lived in this house, he ran successfully in 1897 for Attorney General of Virginia. That position propelled him to the Govenor's mansion five years later. 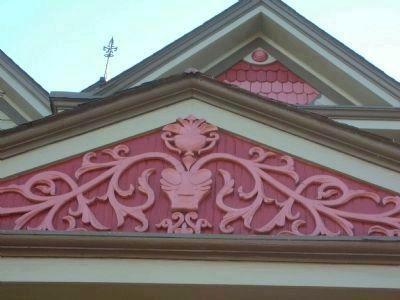