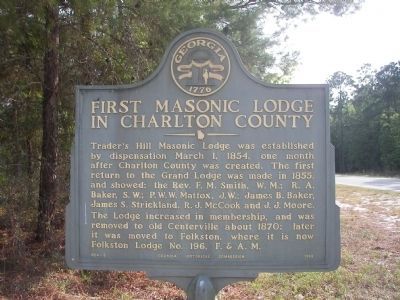 Traders Hill Masonic Lodge was established by dispensation March 1, 1854, one month after Charlton County was created. The first return to the Grand Lodge was made in 1855, and showed: the Rev. F.M. Smith, W.M.; R.A. Baker, S.W.; P.W.W. Mattox, J.W.; James B. Baker, James S. Strickland, R.J. McCook and J.J. Moore. The Lodge increased in membership, and was removed to old Centerville about 1870; later it was moved to Folkston, where it is now Folkston Lodge No. 196 F. & A. M.

Topics and series. This historical marker is listed in this topic list: Fraternal or Sororal Organizations. In addition, it is included in the Georgia Historical Society series list. A significant historical date for this entry is March 1, 1802.

Other nearby markers. At least 8 other markers are within 3 miles of this marker, measured as the crow flies. Oldest Industry in Charlton (here, next to this marker); Trader's Hill (Fort Alert) 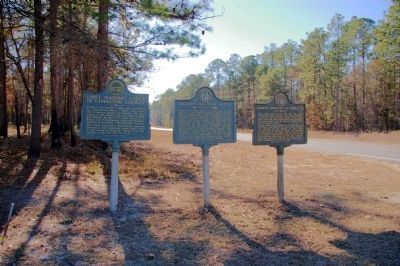