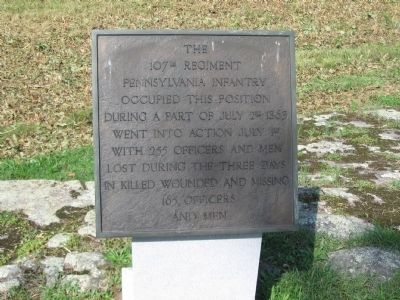 The 107th Regiment Pennsylvania Infantry occupied this position during a part of July 2nd 1863. Went into action July 1st with 255 officers and men lost during the three days in killed wounded and missing 165 officers and men.

Location. 39° 48.947′ N, 77° 14.116′ W. Marker is in Cumberland Township, Pennsylvania, in Adams County. Marker is on Hancock Avenue, on the left when traveling north. Located next to the Brian Farm Buildings on Cemetery Ridge, at Gettysburg National Military Park. Touch for map. Marker is in this post office area: Gettysburg PA 17325, United States of America. Touch for directions. 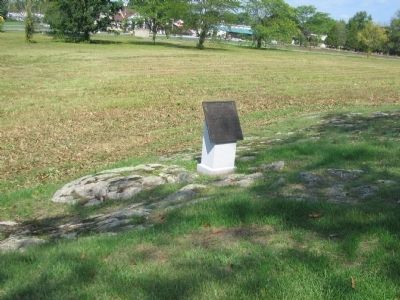 Related markers. Click here for a list of markers that are related to this marker. The 107th Pennsylvania at Gettysburg. 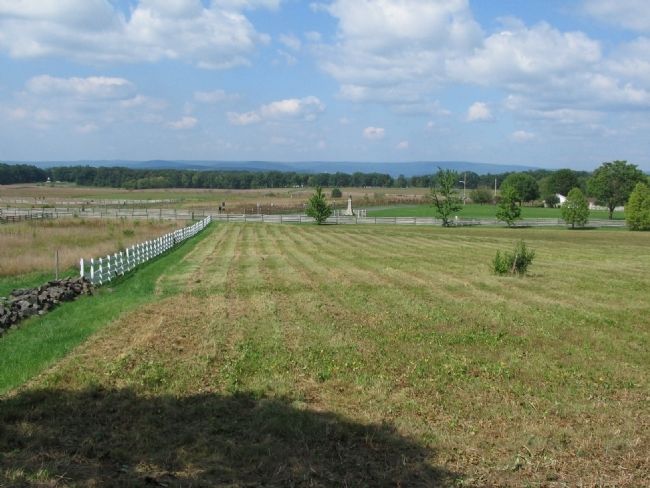 By Craig Swain, September 17, 2008
3. Fields in Front of Cemetery Hill
The 107th Pennsylvania suffered from high attrition in the first day's fighting at Gettysburg. It was posted briefly in this sector to help hold the key position on the western approaches to Cemetery Hill. In the distance is Seminary Ridge, where the main Confederate lines were set. However, on July 2nd, this section of the line was relatively quite compared to the flanks of the Federal lines.
Credits. This page was last revised on December 4, 2020. It was originally submitted on December 20, 2008, by Craig Swain of Leesburg, Virginia. This page has been viewed 1,651 times since then and 8 times this year. Photos:   1, 2, 3. submitted on December 20, 2008, by Craig Swain of Leesburg, Virginia.
Share This Page.