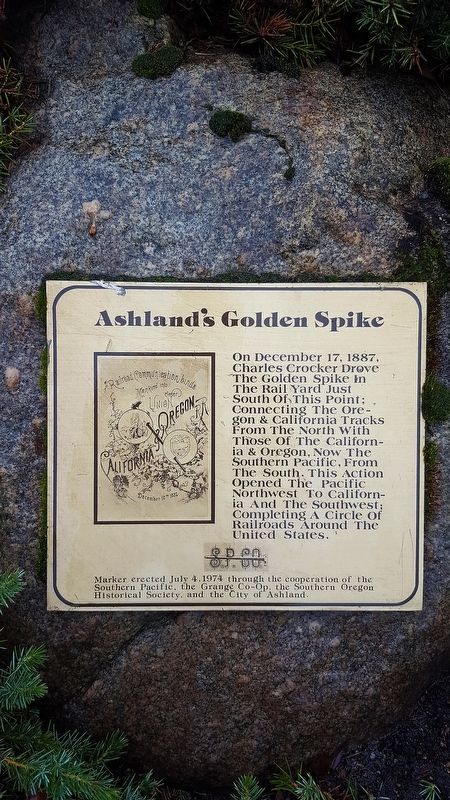 Photographed By Douglass Halvorsen, February 16, 2020
1. Ashland’s Golden Spike Marker
Inscription.
Ashland’s Golden Spike. . On December 17, 1887, Charles Crocker Drove The Golden Spike In The Rail Yard Just South Of This Point; Connecting The Oregon and California Tracks From The North With Those Of The California and Oregon, Now The Southern Pacific, From the South. This Action Opened The Pacific Northwest To California And The Southwest; Completing A Circle Of Railroads Around The United States. . This historical marker was erected in 1974 by Southern Pacific, Grange Co-Op, Southern Oregon Historical Society and the City of Ashland. It is in Ashland in Jackson County Oregon

On December 17, 1887, Charles Crocker Drove The Golden Spike In The Rail Yard Just South Of This Point; Connecting The Oregon & California Tracks From The North With Those Of The California & Oregon, Now The Southern Pacific, From the South. This Action Opened The Pacific Northwest To California And The Southwest; Completing A Circle Of Railroads Around The United States.

Topics. This historical marker is listed in this topic list: Railroads & Streetcars. A significant historical date for this entry is December 17, 1887.

Other nearby markers. At least 8 other markers are within walking distance of this marker. The Applegate Trail (about 700 feet away, measured in a direct line); Ashland, OR (approx. 0.2 miles away); Ashland Cemetery War Memorial (approx. 0.3 miles away); Enders Building No. 1, 1914 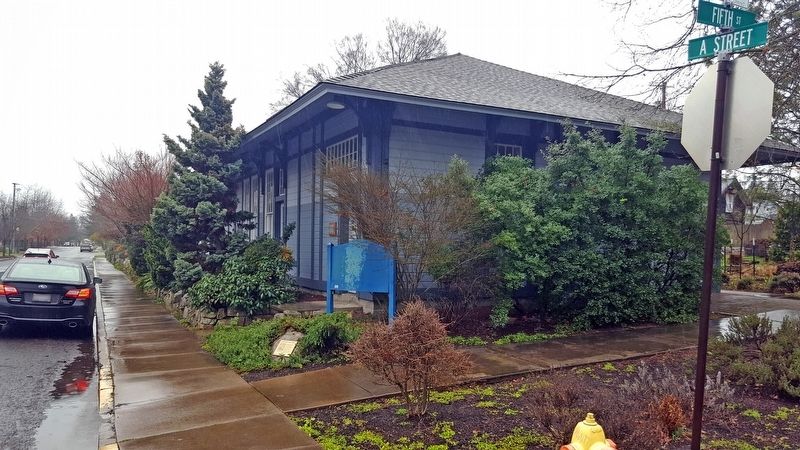 More about this marker. Marker may be hidden by shrubbery during warmer months. This historical marker was relocated to its current site from its original location at the corner of 4th and A streets.

This marker resides next to the historic Ashland Hotel Depot - South Wing from 1888, the last surviving remnant of the original Ashland railroad structures erected after the 'Golden Spike' event of 1887. The depot was relocated 200 feet SE from its original location in 1990.

Regarding Ashland’s Golden Spike. The following verbiage is taken from the National Register of Historic Places Nomination Form for the nearby historic depot building and mentions the significance of the Golden Spike event of 1887:

The railroad first arrived in Ashland from the north on 4 May 1884. For the next three years Ashland would remain the southern terminus of the railroad, connecting the city with the manufacturing and agricultural areas to the north. Products headed to California would be off-loaded onto wagon trains and pulled by horses over the steep Siskiyou Mountains and into the town of Hornbrook, California. By 1887, the rails had been pushed across the Siskiyou summit and into Oregon. On 17 December 1887 the final rails were readied and ceremonies planned for Charles Crocker, Southern Pacific's President, to drive a symbolic golden spike to complete the 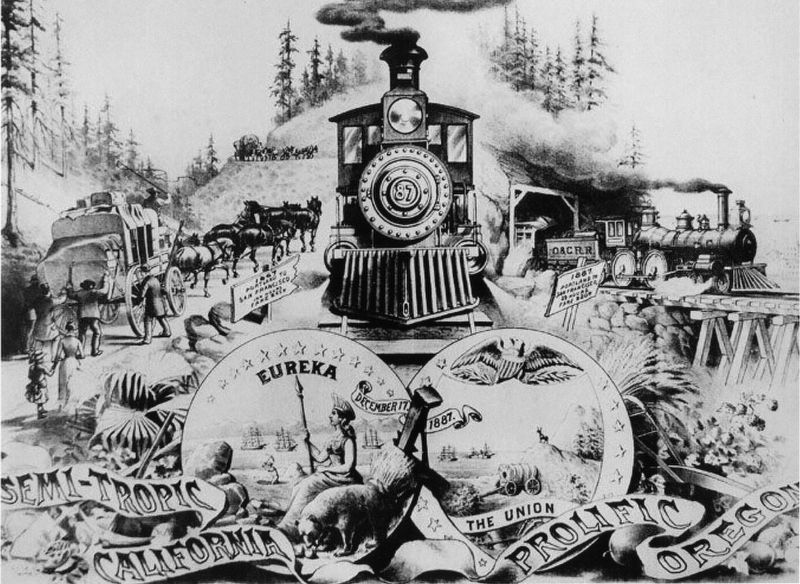 Photographed By Douglass Halvorsen
3. The Golden Spike Commemorative Poster, 1887
This is a photo taken of an 1887 poster commemorating the union of California and Oregon rail lines which finally completed the 'circle of railroads' in the United States.
rail connection of the entire Pacific Coast. The modest Ashland station was festooned with banners and flags for the occasion. The day was a cold one, with a freezing wind, but a large crowd assembled at noon to witness the historic event. They had to wait a long time; a construction train derailed further down the line and blocked the arrival of the special train carrying Crocker and other dignitaries for hours.

It was not until 5:04 p.m. when Crocker finally picked up a silver hammer for the ritual, shortly after two trains —— one from the north and one from the south —— met under an evergreen arch to mark the opening ... of the line now known as the Siskiyou route.

The spike was quickly set in place and telegraph wires were connected to the track to record Crocker's blows as he hammered it home. In Portland, Sacramento and San Francisco steam whistles chorused and fire bells clanged three times as the hammer blows were reported. Cannons fired at military post [and] church bells chimed.

Portland's Oregonian extolled the achievement: "Through the flinty, hard heart of the Siskiyou Mountains, the road has been built, the lines of shining steel laid, and now the 'iron nag' rushes through and over those frowning barriers and its loud shrieks wake the echoes of those wide solitudes ... Golden California has been wedded to her northern sister in the strong bonds of a common welfare and the two states are firmly united by clasping bands of steel.
Credits. This page was last revised on October 28, 2020. It was originally submitted on February 23, 2020, by Douglass Halvorsen of Klamath Falls, Oregon. This page has been viewed 140 times since then and 61 times this year. Photos:   1, 2, 3. submitted on February 23, 2020, by Douglass Halvorsen of Klamath Falls, Oregon. • Syd Whittle was the editor who published this page.
Share this page.