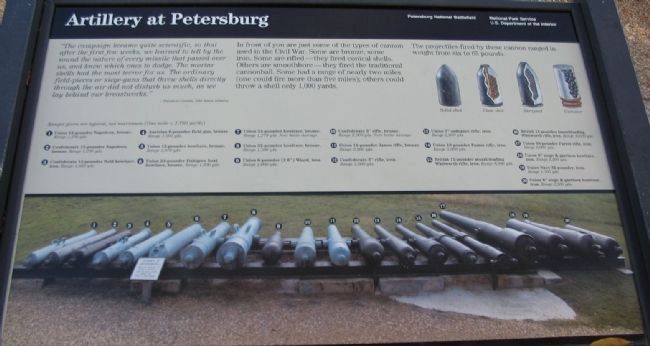 "The campaign became quite scientific, so that after the first few weeks, we learned to tell by the sound the nature of every missile that passed over us, and knew which ones to dodge. The mortar shells had the most terror for us. The ordinary field-pieces or siege-guns that threw shells directly through the air did not disturb us much, as we lay behind our breastworks."
Theodore Gerrish, 20th Maine Infantry

In front of you are just some of the types of cannon used in the Civil War. Some are bronze, some iron. Some are rifled - they fired conical shells. Others are smoothbore - they fired the traditional cannonball. Some had a range of nearly two miles (one could fire more than five miles); others could throw a shell only 1,000 yards.

The projectiles fired by these cannon ranged in weight from six to 65 pounds.

(Numbered tags to each cannon on display, referenced on the photograph):
Ranges given are typical, not maximum (one mile = 1,760 yards) 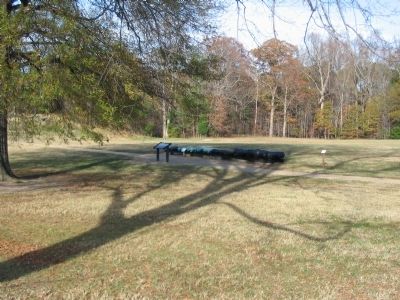 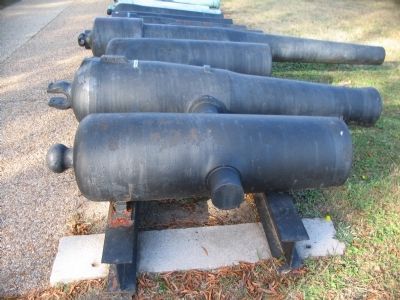 Photographed By Craig Swain, November 22, 2008
3. Artillery Display
Looking from the right side of the display. Closest to the camera is artillery piece #20 from the list.
historical marker is listed in this topic list: War, US Civil.

Location. 37° 14.673′ N, 77° 21.421′ W. Marker is near Prince George, Virginia, in Prince George County. Marker can be reached from Petersburg Tour Road, on the left when traveling north. Located along the Battery 5 walking tour, in Petersburg National Battlefield Park. Touch for map. Marker is at or near this postal address: 5001 Siege Rd, Prince George VA 23875, United States of America. Touch for directions.

More about this marker. In the upper right are illustrations of solid shot, case shot, shrapnel, and canister rounds used by rifled guns. The lower half of the marker displays a photograph of the guns on display, keyed to the numbers in the text above. 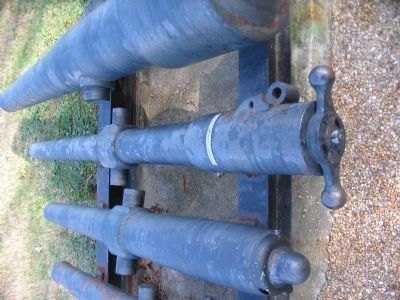 Photographed By Craig Swain, November 22, 2008
4. The Whitworth Guns
Tagged as numbers 15 and 16 on the captions, the two Whitworth guns are representative of the guns imported by both Federal and Confederate governments during the war. The pair also serves to illustrate the old technology used in the war (muzzle loading, at the bottom of this photo) with the new technology emerging at the time (breech loading, in the center). To the top of the frame is a 30-pounder Parrott Rifle.
1936 officials planned to develop an artillery exhibit at Petersburg. Since a wide variety of guns were used at the siege, Petersburg was a fitting place for such a display. By the start of World War II, over 100 pieces were acquired. But with the war came scrap drives. Officials at the park buried the guns to keep them from the melting pots. See page 95 of the PDF for more details. (Submitted on December 22, 2008, by Craig Swain of Leesburg, Virginia.) 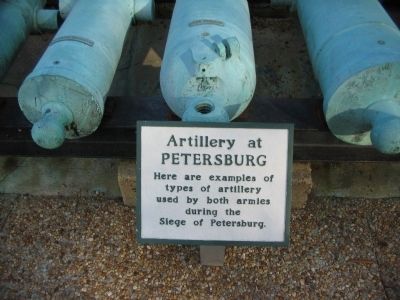