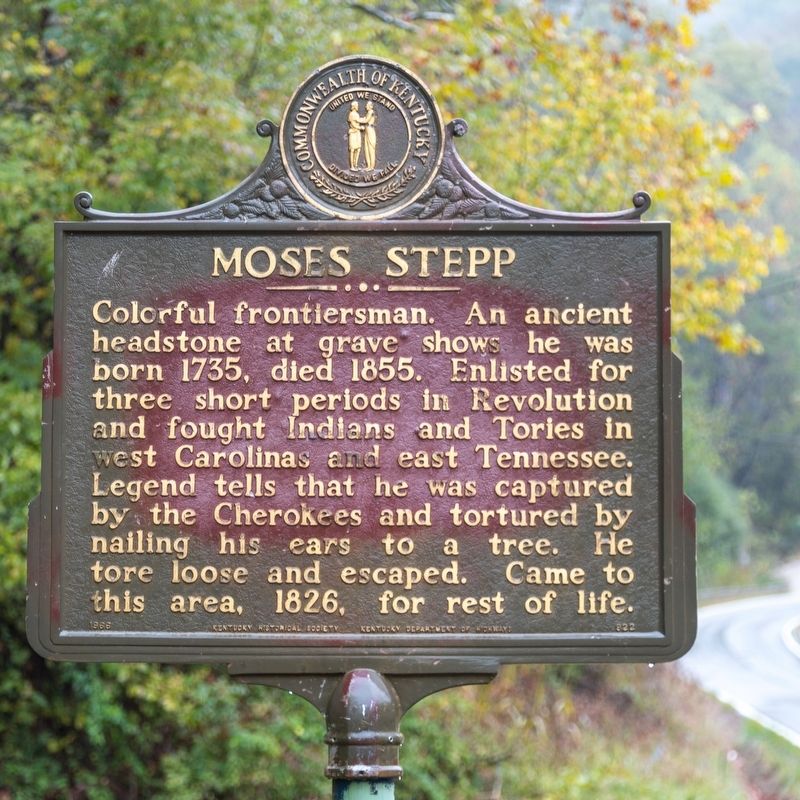 Photographed By J. J. Prats, October 20, 2019
1. Moses Stepp Marker
Inscription.
Moses Stepp. . Colorful frontiersman. An ancient headstone at grave shows he was born 1735, died 1855. Enlisted for three short periods in Revolution and fought Indians and Tories in west Carolinas and east Tennessee. Legend tells that he was captured by the Cherokees and tortured by nailing his ears to a tree. He tore loose and escaped. Came to this area, 1826, for rest of life. . This historical marker was erected in 1966 by Kentucky Historical Society / Kentucky Department of Highways. It is Near Laura in Martin County Kentucky

Colorful frontiersman. An ancient headstone at grave shows he was born 1735, died 1855. Enlisted for three short periods in Revolution and fought Indians and Tories in west Carolinas and east Tennessee. Legend tells that he was captured by the Cherokees and tortured by nailing his ears to a tree. He tore loose and escaped. Came to this area, 1826, for rest of life.

Topics and series. This historical marker is listed in these topic lists: Settlements & Settlers • War, US Revolutionary. In addition, it is included in the Kentucky Historical Society series list. A significant historical year for this entry is 1735.

Other nearby markers. At least 8 other markers are within 10 miles of this marker, 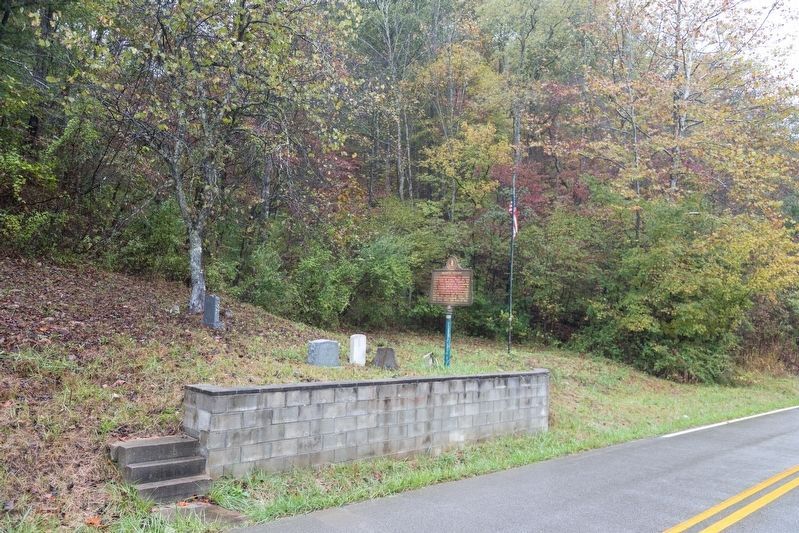 Photographed By J. J. Prats, October 20, 2019
2. Moses Stepp Grave Site and Marker
A green-painted flagpole flying the American flag is to the right of the historical marker.

Additional commentary.
1. The Stepp Family Chronicles: A History of the Ancestors and Descendants of John Stepp
Excerpt:

Moses Stepp, Orange County Virginia native, and resident of Pike County, Kentucky when he died was soldier, Indian fighter, hunter explorer and backwoods settler of five states. he became a legend long before he succumbed to great age, so old his descendants said that when he died he attained the age of 120 years. If his headstone dates are true on his grave beside the road on the Pigeon Roost Fork of Wolf Creek in the present Martin County, Kentucky, he was the oldest man to ever live in Kentucky.

He joined the revolutionary forces when he was a mere youth, fought Indians and Tories, helping to hang many of the latter. He was a hunter of renown 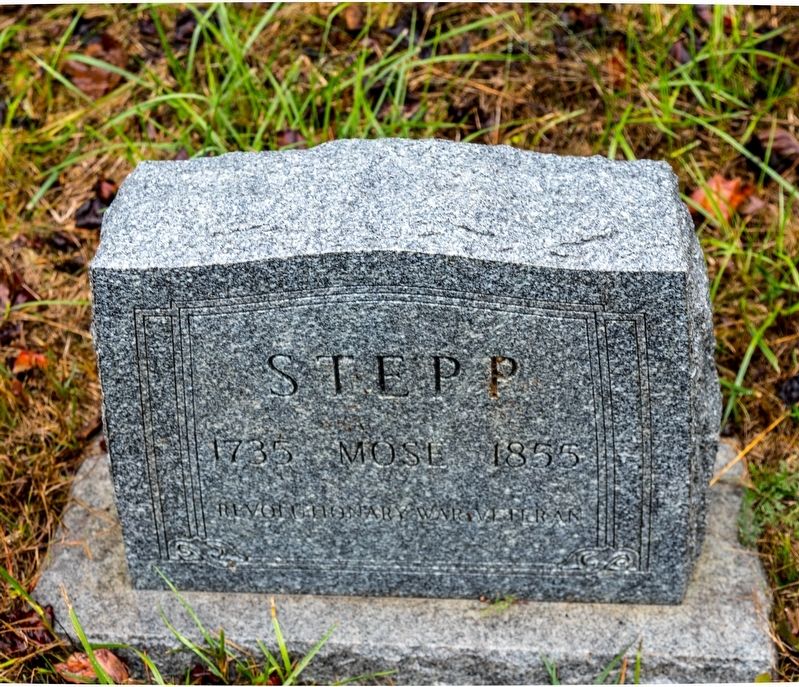 Photographed By J. J. Prats, October 20, 2019
3. Mose Stepp Grave Monument
It reads, “Stepp / 1735 Mose 1855 / Revolutionary War Veteran”.
who approached famous marksmen and hunters who earned pages in history but Stepp imprinted himself upon no history and left only legends and the meager data of official records. Between his tours of service in the Revolutionary Armies he probed the unexplored niches of the Appalachians in the five states of North Carolina, South Carolina, Virginia, Kentucky, and West Virginia. He was on the Tugaloo in South Carolina when it was Indian country, in the heart of the Blue Ridge when all his surroundings were implacable and pristine, in Southwestern Virginia when the deer and bear roamed the hills that overlooked his cabin on Grassy Creek.

He left Virginia because settlers built cabins within a few miles of him and wandered into the headwaters of the Licking River in Kentucky. For a few years he thought that he would settle down on the Meadows of Licking but here too settlers came and soon the game was gone. Like Boone who left the more settled communities of Central Kentucky and sought refuge in the Kanawha Valley, Stepp turned east in his search for room and game. He found what he wanted in Wolf Creek Valley, a tributary of the Tug River that now separates Kentucky and West Virginia. In his old age he continued to hunt and many a lonely safari took him deep into the mountains of Southern West Virginia, then Virginia.

He was blonde, read headed and tall. His physique 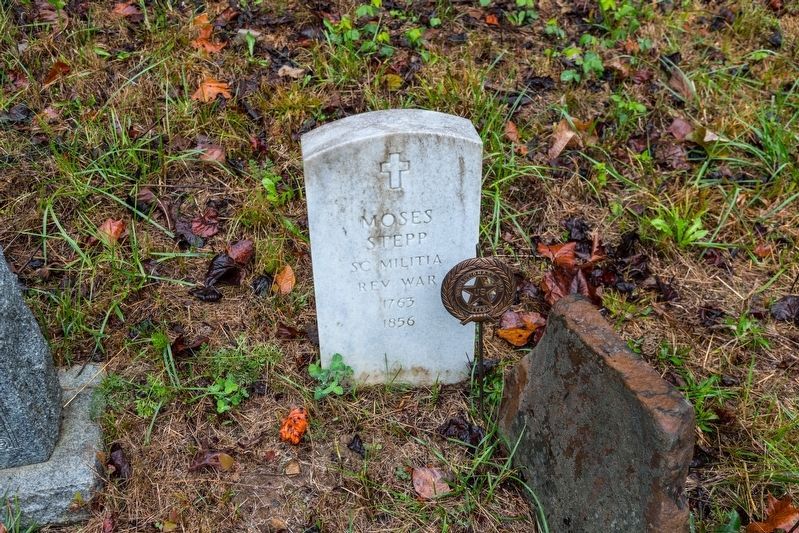 Photographed By J. J. Prats, October 20, 2019
4. Moses Stepp Military Headstone
This stone is to the right of the granite monument (its edge is visible on the left). It reads, “Moses Stepp, S.C. Militia, Rev. War, 1763-1856”. The weathered stone to the right is the original headstone and can be better seen in Photograph No. 5.
was such that men never forgot the expansive and hairy chest, the bulging biceps or the big hands and great feet to match. Living as he did in a period when men of strength and aggressiveness were won to display their prowess in rude combat, Stepp had few challengers. It is said that he roundly thrashed two or three, sometimes as many as four challengers who came to vote on election day but remained to drink and fight. He was of such strength that he could double back the arm of any opponent and dislocate a shoulder with a swift thrust. Men learned to give him a circumspect glance and back away.

It was his torn disfigured ears that lent fierceness to his physiognomy. The Cherokee had captured him while he was on a lonely hunt in Northwestern South Carolina, tied him to a tree by inserting deer thongs through his ears and prepared to torture him. Before the ordeal began, he suddenly wrenched loose and escaped. For the remainder of his life those torn appendages made him a marked man for legends and folk stories. When they buried him on the Pigeon Roost Fork of Wolf Creek, mothers held their children up so they could gaze and were enjoined at the time to remember the man in the coffin. They remembered, many of them for four score years.

He lived to be old, so old that no one could correctly calculate his age for there were no written records. The folk will have 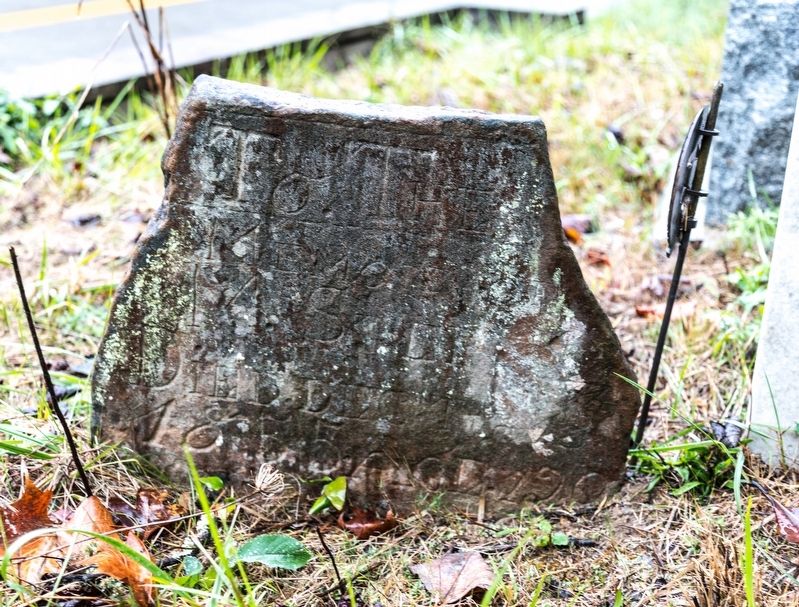 Photographed By J. J. Prats, October 20, 2019
5. Original Grave Marker for Moses Stepp
their say. They said he was the oldest man who ever lived in Kentucky and when he was interred the inscribed on a rude stone, "born in 1735, died 1855." The last date is certainly not correct for War Department records note he died in 1856 but if the stone dates of birth and death had been true he would have been 120 years old at death.

He became a legendary figure long before he died, and he remains a legend today, 116 years after his demise. Eastern Kentucky and Southern West Virginia Stepps, all his descendants, talk of him as if he lived but yesterday. 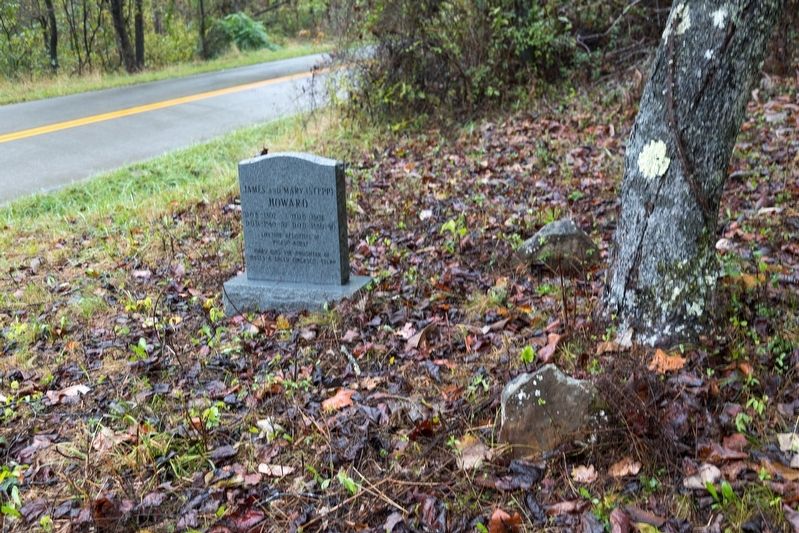