Grand Lodge of Free and Accepted Masons of Ohio 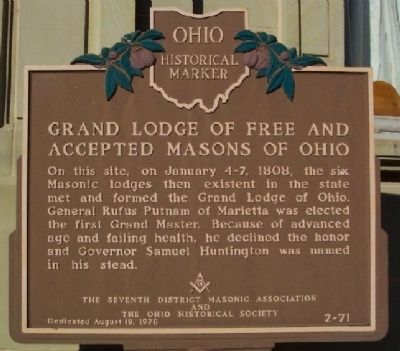 On this site, on January 4-7, 1808, the six Masonic lodges then existent in the state met and formed the Grand Lodge of Ohio. General Rufus Putnam of Marietta was elected the first Grand Master. Because of advanced age and failing health, he declined the honor and Governor Samuel Huntington was named in his stead.

Topics and series. This historical marker is listed in this topic list: Fraternal or Sororal Organizations. In addition, it is included in the Ohio Historical Society / The Ohio History Connection series list. A significant historical month for this entry is January 1864.

Other nearby markers. At least 8 other markers are within walking distance of this marker. Court House Renovation (here, next to this marker); Donald E. McHenry (a few steps from 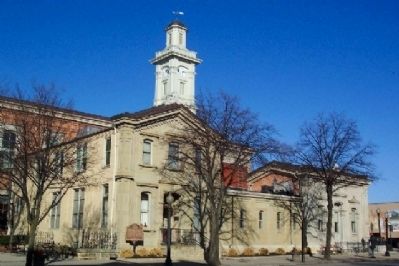 Click or scan to see
this page online
this marker); Site of Ohio's First Statehouse (within shouting distance of this marker); A Replica of Ohio's First Capitol (about 300 feet away, measured in a direct line); Historic Site in Journalism (about 400 feet away); The Chillicothe Gazette (about 400 feet away); Banking Crisis of 1819 (about 500 feet away); Scioto Lodge No. 6 F. & A. M. (about 700 feet away). Touch for a list and map of all markers in Chillicothe.
Credits. This page was last revised on December 2, 2019. It was originally submitted on December 24, 2008, by William Fischer, Jr. of Scranton, Pennsylvania. This page has been viewed 923 times since then and 30 times this year. Photos:   1, 2. submitted on December 24, 2008, by William Fischer, Jr. of Scranton, Pennsylvania. • Bill Pfingsten was the editor who published this page.
Share this page.