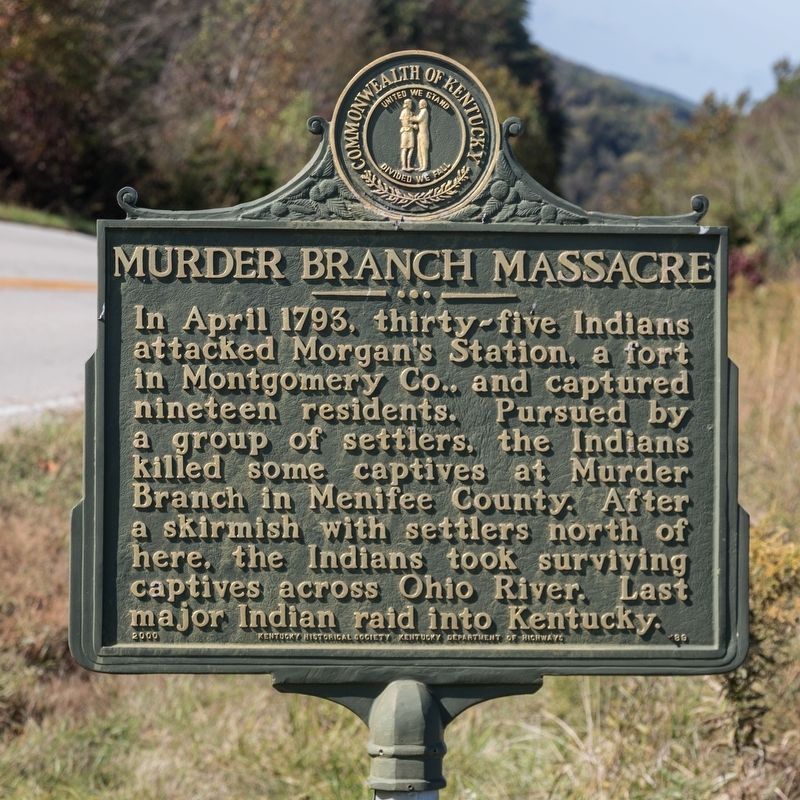 Photographed By J. J. Prats, October 21, 2019
1. Murder Branch Massacre Marker
Inscription.
Murder Branch Massacre. . In April 1793, thirty-five Indians attacked Morgan’s Station, a fort in Montgomery County, and captured nineteen residents. Pursued by a group of settlers, the Indians killed some captives at Murder Branch in Menifee County. After a skirmish with settlers north of here, the Indians took surviving captives across Ohio River. Last major Indian raid into Kentucky. . This historical marker was erected in 2000 by Kentucky Historical Society and Kentucky Department of Highways. It is Near Wellington in Menifee County Kentucky

In April 1793, thirty-five Indians attacked Morgan’s Station, a fort in Montgomery County, and captured nineteen residents. Pursued by a group of settlers, the Indians killed some captives at Murder Branch in Menifee County. After a skirmish with settlers north of here, the Indians took surviving captives across Ohio River. Last major Indian raid into Kentucky.

Topics and series. This historical marker is listed in these topic lists: Settlements & Settlers • Wars, US Indian. In addition, it is included in the Kentucky Historical Society series list. A significant historical month for this entry is April 1793.

Location. 37° 59.619′ N, 83° 28.936′ W. Marker is near Wellington, Kentucky, in Menifee County. Marker is at the intersection of Old Beaver Road (Route 1274) and Big Woods Road, on the right when traveling west on Old Beaver Road. Touch for map. Marker is in this post office area: Wellington KY 40387, United States of America. Touch for directions.

Other nearby markers. At least 8 other markers are within 12 miles of this marker, measured as the crow flies. Beaver Dam Furnace / Iron Made in Kentucky 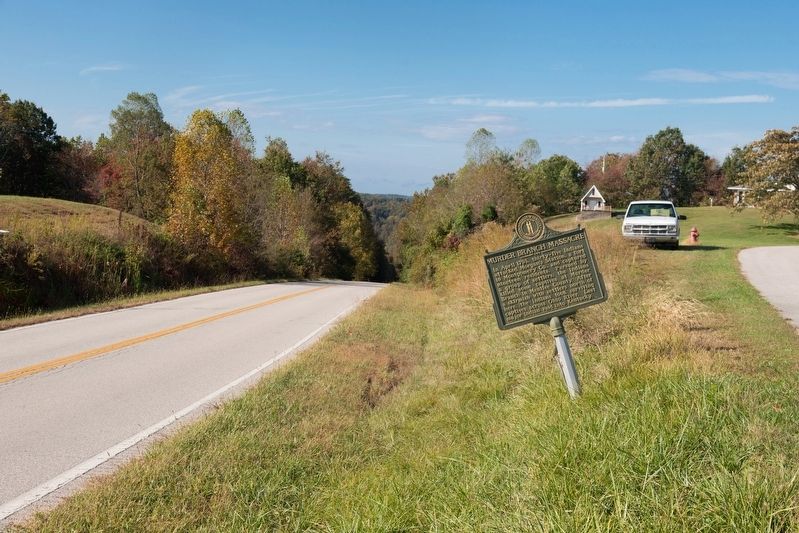 More about this marker. Based on the marker number, 189, it can be safely assumed that this marker was reworded when it was recast in 2000. Markers numbered before and after 189 were erected in 1962, the text was all upper case, and could not fit this much text. Furthermore, the Kentucky Historical Society typically keeps the original year on recast markers when it does not alter the text.

Also see . . .
1. Account of the Murder Branch Massacre. The author is not listed. Excerpt:

A resident at Morgan Station, Harry Martin, had had a run-in with a Cherokee chieftain over some matter. The Cherokee wished Martin dead, but could not convince any of his tribe to attack the station, so he went north into Ohio to gather some assistance from the Shawnee with the promise of easy plunder.

On April 1, 1793, John Wade (Jr) had gone to Harry Martin’s cabin in Morgan’s Station to collect money due him for corn that Martin had bought, when the Indian Alarm was raised. Wade ran out, followed by Martin, who had snatched up his gun from the wall.

The Becraft men and Andy Duncan had been out working in the corn fields, and were racing back for the safety of the Station. Abraham Becraft, the father, who, being close to the woods, jumped over the fence and made his escape unnoticed by the Indians chasing the others.

Wade and Martin ran out of the gate, to give them cover fire. Martin, seeing two or three Indians in pursuit ran past his fleeing neighbors, while the Whites took refuge in one of the three blockhouses, their having left the guns in the corn fields.

Wade Jr, ran into the nearest blockhouse and spied out the loop hole. He saw an Indian, in advance, carrying a beautifully finished rifle in one hand, the polished brass on the butt glittering as it caught the rays of the sun, and in the other a shining tomahawk, brandishing over his head. Suddenly he dropped to one knee and took a shot at Martin running at him.

Some 10 or 15 steps behind followed 30 or 40 Indians, all spread out in a line and making towards the Station. Martin, startled on seeing how many there were, stopped and turned around, running with the Becrafts and Duncan.

Shots erupted from the Station, doing nothing. The ineffective fire emboldened the Indians, who let out a yell and ran on.